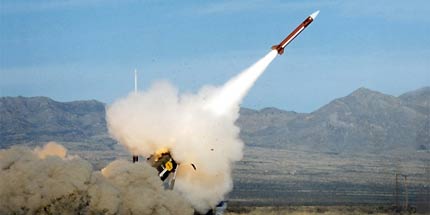 From Justin Stares, Public Service Europe:  Europe’s missile defence capability is a "disease" eating away at confidence between Russia and the North Atlantic Treaty Organisation – according to a senior diplomat from the Russian Ministry of Foreign Affairs. If not treated in time, the disease is likely to develop "into something more serious", said Vladimir Leontiev, deputy director at the ministry’s department for security and disarmament. . . .

The phased upgrading of the alliance’s European missile infrastructure to the point where by 2020 it possesses 500 interceptor missiles will "break the strategic balance" between Russia and the west – forcing Moscow to take "all necessary measures to ensure Russia’s security. . . ."

There are however increasing questions as to whether NATO can afford to upgrade its missile defence capability beyond the rudimentary level established in May. Politicians in the United States say Europe’s NATO members are not pulling their weight and should take on a greater cost burden. This is a big ask given the speculation that cash-strapped European nations might pull out of missile defence altogether. Those staving off bankruptcy could even do away with their air force, some commentators claim.

During the seminar’s lunch break, Russian diplomats asked how they could believe NATO’s promises regarding its missile defence capability given the broken promises regarding the expansion of the alliance into the former Warsaw Pact countries. Defence capabilities could be turned to offence almost immediately, given that no limits have been placed on the type or size of missile at the European system’s disposal – it was claimed. The declaration by American presidential candidate Mitt Romney that Russia was the "number one geopolitical foe" of the US has understandably not done much to calm nerves in Moscow.

Bulent Meric, director general for international security affairs at the Turkish Ministry of Foreign Affairs, said his country’s participation in the missile defence system had triggered a lot of internal criticism. Turkey hosts a critical radar station. It was necessary, Meric said, to strike a balance between "political and military control" of the system. Is Turkey after some kind of veto?   (photo: Public Service Europe)