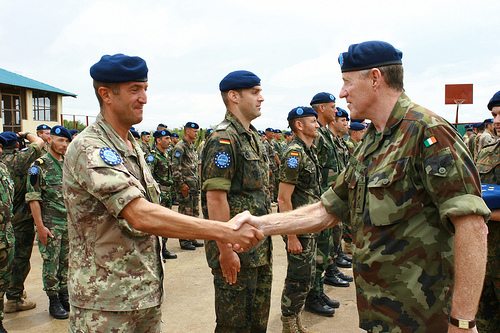 From Sven Biscop, New Atlanticist:  In December 2013 the heads of state and government of the European Union (EU) will discuss defense. At the instigation of European Council President Herman Van Rompuy they are likely to address this eminently political question too. Which role does Europe aspire to as a security provider outside its own borders?

Europe, not the EU’s Common Security and Defense Policy (CSDP). At the 2013 annual conference of the European Defense Agency, Van Rompuy clearly expressed his concern to be not just the CSDP but “the state of defense in Europe.” The strategic debate cannot be limited to some aspects likely to be acted upon through the CSDP. The challenge is to define overall priorities for the use of the military instrument, in function of the vital interests and the foreign policy of the EU and its member states. The logical political forum to set such a European military strategy is the EU, but without any prejudice to action under UN, NATO, CSDP, or national command–the crisis will determine that choice in each individual case.

The regions and contingencies in which their vital interests are most directly threatened determine the responsibilities that Europeans should assume and be willing to act upon. In (1) crisis management, they must be able to act across the full spectrum of expeditionary operations, up to peace enforcement and war. But a military strategy also encompasses (2) prevention, by maintaining a permanent forward presence in priority areas, and (3) deterrence, by having a credible power projection capacity at all times.

Austerity budgets render prioritization even more important: strategy is crucial to assure that what means we do have are spent in the most relevant way. The shift of the American strategic focus to Asia is another major factor. The “pivot” does not determine what European priorities are, but in limiting the extent to which American capabilities can be counted upon it does determine how many European capabilities will be required. . . .

Strategy has to drive the acquisition of the means, but also decision-making. When the next crisis arises, decision-making should be faster, and mandating action by the able and willing Europeans under the political aegis of the EU should be easier. Thus a truly comprehensive approach, integrating operations under whichever command structure the able and willing have recourse to with the entire toolbox of the EU, should become reality.

Prof. Dr. Sven Biscop, a member of the Atlantic Council’s Strategic Advisors Group, is director of Egmont’s Europe in the World programme and teaches at Ghent University and the College of Europe. This essay is adapted from a longer Security Policy Brief just published by Egmont.  (photo: European External Action Service)