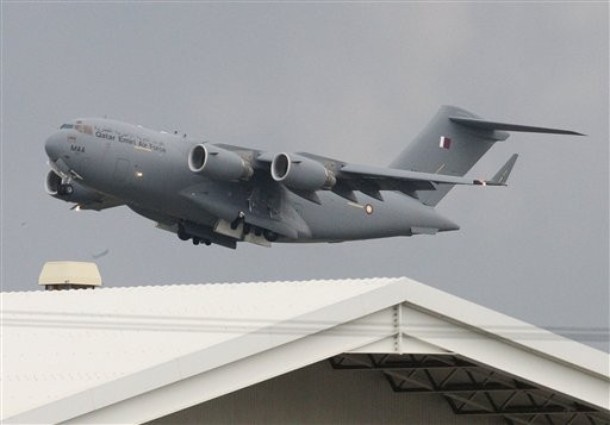 From Steve Coll, the New Yorker:  Early on during the NATO intervention in Libya, air-traffic controllers in Cyprus received an unexpected call from two armed fighter jets. The pilots reported that they were out of gas and needed to land. Reluctantly, the Cypriots granted permission, according to military officers who described the incident to me late last year. A pair of Mirage 2000 fighters from Qatar, loaded with weaponry, soon landed at Cyprus’s main civilian airport and taxied to a parking spot amid commercial airliners full of beach tourists. The Qatari pilots, it turned out, were on their way to Italy to join the air war against former Libyan dictator Muammar Qaddafi. This was their first military mission; the officers did not know how to seek clearances for warplanes, and they had miscalculated how much fuel they would need.

Qatar, the United Arab Emirates, and Jordan all participated in the air campaign over Libya. (Jordan did not publicize its action.) They joined an international coalition led by France and Britain, and supported by the United States and the United Nations, that justified its intervention on humanitarian grounds, based upon a “duty to protect” civilians that has evolved as a principle of international law.

Qatar is a Sunni Muslim monarchy whose emir, Sheikh Hamad bin Khalifa Al Thani, asserts a divine right to rule. It seems safe to assume, as Hugh Eakin has described, that the expansion of global democratic rights was not among its motivations in the Libyan campaign. The country’s chief of the armed forces, General Hamad bin Ali al-Attiyah, outfitted himself in a C-17 and jetted around the war zone like a swashbuckler, handing out money to rebel factions, including to some Islamists with disturbing agendas. For Qatar, the Libyan intervention seemed akin to its successful bid to host the World Cup in 2022, or its construction of a Formula One racetrack: it was a fun thing for wealthy people to do with their money, certainly better than sitting around in air-conditioned diwans watching the Arab Spring on Al Jazeera. (Al Jazeera is also a disruptive Qatari creation.)

Sheikh Khalifa presides over a tiny native population of only about two hundred and twenty-five thousand people. Like the subjects of a few other smaller Gulf monarchies, such as Kuwait and the U.A.E., native Qataris enjoy the sort of table-topping per-capita income that makes even the most complaining among them more like restive shareholders than potential revolutionaries. So the emirate faces relatively little risk that its flirtation with international human-rights principles might boomerang.

Qatar’s activism, however, has now helped goad the full membership of the Arab League, a previously moribund body, to extend the ideas that guided the Libyan campaign to the case of Syria and the mass killing of civilians by the regime of President Bashar al-Assad. This has proved a more complicated endeavor, not only as a matter of geopolitics but also as a forum for action on the basis of principle. . . .

No intervention of this type is ever clean or free of residual, harmful effects. If Syria’s war crimes were not so abhorrent, the cost-benefit equation might argue for indirect aid to Assad’s victims. Turkey’s position is hardly unblemished: it has regional ambitions of its own; its government previously coddled Assad; and its democratically elected Prime Minister, Recep Tayyip Erdogan, has taken actions that smack of authoritarianism against domestic critics.

Yet Erdogan has credibility as a democrat and an independent leader; he is no tool of the West. He has the credentials and standing in the Arab world to declare persuasively, as he did recently, “Syria right now has an administration which mercilessly murders its own citizens. The situation that has emerged there is right now heading toward a religious, sectarian, and racial civil war. This must be stopped.”

The United States and European governments have invested themselves in that project, too, within limits. Qatar and the Arab League again must play a role, and Qatar’s Mirages may yet be summoned to fly again. More than any single world leader, however, it will be up to Erdogan to break the Syrian stalemate and see to Assad’s departure, if this can be achieved. Such a success might also resonate beyond Damascus: the Turkish model of democratic Islamic politics and constitutional power sharing—unlike the Qatari or the Saudi model of governance—is attractive to activists struggling to define the Arab Spring’s second chapter. (photo: AP)