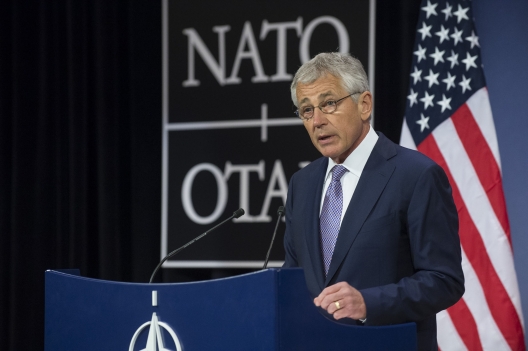 Hagel warned earlier that “as NATO adjusts, it must address the gaps in military expenditures and capabilities of its partners. The tough decisions cannot continue to be deferred.”

Hagel was even more explicit at the defense ministers meeting in June when he said “over-dependence on any one country for critical capabilities brings with it risks.” One of these risks is that the U.S. will soon tell its allies, if you don’t invest much in your defense, neither will we. The U.S. will “rebalance” its own shrinking defense dollars to allies and partners that share the security burden more equitably. Too many European leaders refuse to realize that this long-festering problem is having a dangerously corrosive effect on the Alliance. . . .

In fact, criticism of the excessive dependence on U.S. capabilities by NATO allies is one of the few issues that enjoys widespread bipartisan support in Congress. If U.S. allies continue to ignore the gravity of this problem, it is inevitable that the day will come when the United States will stop payment on their security credit card. The Obama administration began moving in this direction when it chose to “lead from behind” in Libya and limited the use of important U.S. enablers such as unmanned aircraft and A-10 war planes. The administration already crossed the threshold, but changed its mind, when it initially asked the French military to pay for the use of U.S. air transports for the French mission in Mali.

The European members of NATO are geographically closer and arguably more vulnerable than the U.S. to the growing violence and instability across the Mediterranean, the Sahel, and the Middle East. Unless significant progress is made to fairly live up to their defense commitments, Europe will have to deal with these threats with a decreasing amount of U.S. military support. It is only a matter of time before the Obama administration turns down future requests for assistance from allies who ignored the dangers in their neighborhood and chose to starve their defense capabilities. . . .

This can still be avoided if our NATO allies improve their military capabilities and carry their fair share of the defense burden. What cannot be avoided is the end of the status quo. Either our European allies change their defense behavior or the U.S. will, but the current imbalance within the NATO alliance is not sustainable.

Dr. Benitez is the director of NATOSource and a senior fellow at the Atlantic Council.