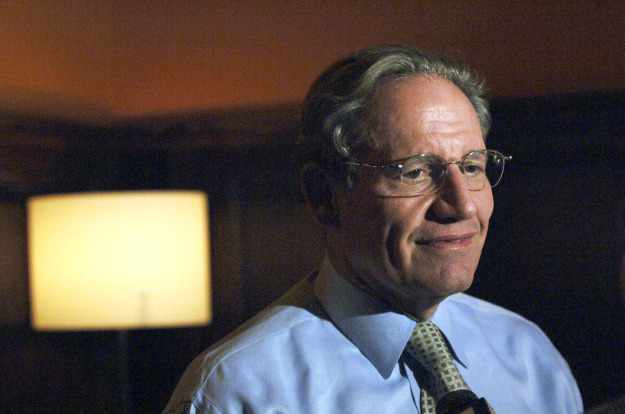 From Foreign Policy:  On Friday, the White House parted ways with a very publicly unhappy national security advisor and many blamed his hasty pre-election exit on the account in journalist Bob Woodward’s new book, Obama’s Wars. Woodward tells Foreign Policy what he makes of Jim Jones’s rocky tenure, why the president "is his own chief foreign policy strategist" — and how he’s still doesn’t trust his generals. …

BW: Well there’s the cliché that I keep talking about — that Bush is the gut player and he always said "I’m not a textbook player." And Obama’s all textbook. And we think no gut but actually I think Obama’s gut on this is very clear: He does not like war and he wants out. And bringing Donilon into the National Security Council as the national security advisor is a real kind of declaration of we’re going…you know, the president’s view is going to be more controlling here. And it just couldn’t be clearer. Donilon has a world view that’s very consistent with the president’s. Both of them view the war in Afghanistan as an investment, like you would spend $8 billion on a roads project and you know, get the road done then you’re out of there. And the president has made it clear this is a limited investment in terms of money and time and the military doesn’t like that. It’s an axiom, that you don’t do these things on a timetable and there’s a lot of evidence to support that. …

FP: What role do you think politics is playing in this?

BW: Presidents are political animals obviously, so this is part of what’s going on.

BW: Donilon and [retired Lt. Gen. Doug] Lute are the real skeptics about whether this is working or not [in Afghanistan.] Lute is very much trusted and respected by the president. He was in there saying in the strategy review, you know, "You don’t need to do this. It’s not a calculated risk but a gamble." And the four risk factors he lays out are in the secret orders for the monthly review and all four of them aren’t going very well.  Now here’s the big question, I think, in all of this: Can miracle Dave Petraeus…

Can he put Humpty Dumpty back together again? He did it in Iraq and he’s a phenomenal general. And so I intentionally end the book with him kind of saying "Gee," back in 2007 when he’s in Iraq, "Why didn’t I take that Afghan job?"

FP: Do you think he and Obama have established a real working relationship yet?

BW: There’s not much evidence of it. I thought one of the most telling moments when I talked to Obama was when I asked about [appointing Gen. Stanley] McChrystal, and he only met with him for ten minutes. I said, but this is your Eisenhower. He would not accept that and he went off saying "I’m not FDR" and "This isn’t World War II" and so forth. And I just said to him, "But this is your war" and it’s personal relations that count. The point is to spend ten minutes with the guy who’s going to take over the war? I don’t get that. But then he gets on a plane and goes every week on these campaign swings, you know, to send a political message of the day? It’s a misallocation of time.