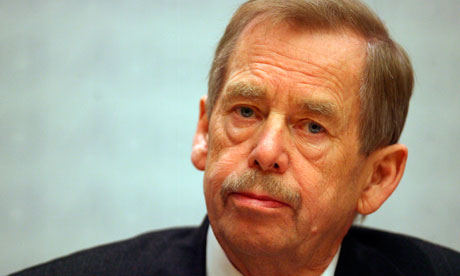 From the BBC:  Tributes have been pouring in for the man many consider a driving force in the overthrow of communist rule in eastern Europe. . . .

German Chancellor Angela Merkel hailed Havel as a "great European" in a letter of condolence to Czech President Vaclav Klaus.

"His fight for freedom and democracy was as unforgettable as his great humanity," wrote Mrs Merkel, who grew up in communist East Germany.

"We Germans in particular have much for which we are grateful to him. We mourn this loss of a great European with you," she wrote.

"Havel devoted his life to the cause of human freedom. For years, Communism tried to crush him, and to extinguish his voice. But Havel could not be silenced.

Swedish Foreign Minister Carl Bildt wrote on Twitter: "Vaclav Havel was one of the greatest Europeans of our age. His voice for freedom paved way for a Europe whole and free."

"Barbara and I join in mourning the death of Vaclav Havel, a gentle soul whose fierce devotion to the rights of man helped his countrymen cast aside the chains of tyranny and claim their rightful place among the free nations of world," said former U.S. President George H. W. Bush. "His personal courage throughout that twilight struggle inspired millions around the world, including those of us who worked with him during a historic period of transformation for Europe."

From CTK:  In the NATO headquarters, flags have been flown at half-mast since Sunday. A book of condolences will be available at the Czech mission to NATO.  (photo: John Macdougall/AFP/Getty)