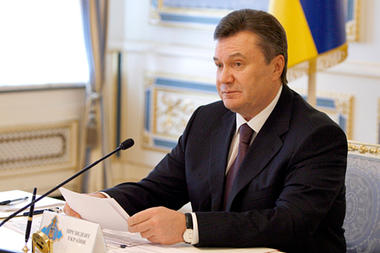 From the Christian Science Monitor:  Ukraine’s once deeply controversial bid to join NATO appears to have died a little-noticed bureaucratic death this week, as incoming President Viktor Yanukovich moved to abolish a commission that had been overseeing the country’s preparations for eventual entry into the Western military alliance.

Monday’s presidential decree scrapping the commission came as Mr. Yanukovich was meeting with Russian President Dmitry Medvedev amid his second official visit to Moscow since being elected in February. Another commission, whose brief was to promote Euro-Atlantic integration, was cut along with a few dozen other advisory state bodies associated with the Western-leaning former president Viktor Yushchenko. …

Though opinion polls over the years have shown Ukrainian majorities favor the idea of eventually joining the European Union, NATO membership has never commanded popular support.

"Our latest poll on this was in October 2009, when 17 percent of Ukrainians supported joining NATO and 53 percent were opposed," says Vladimir Paniotto, director of the independent Kiev International Institute of Sociology. "We’ve polled on this regularly over the years, and majorities have always been against joining NATO."  (photo: Andriy Mosienko/Reuters)