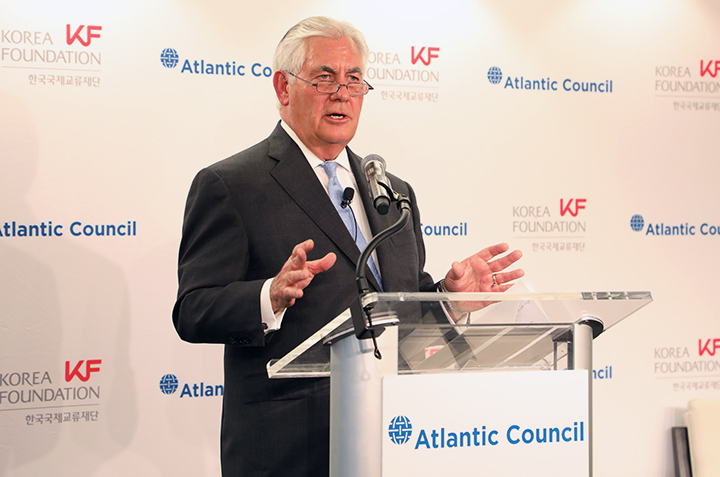 As troubling as current tensions are, 2018 promises to be an even more dangerous year on the Korean Peninsula. Amid conflicting signals from US President Donald J. Trump’s administration and anticipated hints of flexibility in North Korean leader Kim Jong-un’s New Year’s statement, one immediate question is whether and under what circumstances Washington will be willing to open talks with Pyongyang to defuse the crisis.

There was no ambiguity in US Secretary of State Rex Tillerson’s remarks at the Atlantic Council on December 12. “We’re ready to talk anytime North Korea would like to talk, and we’re ready to have the first meeting without preconditions. Let’s just meet and let’s—we can talk about the weather if you want,” he said.

But no sooner had Tillerson made the offer to meet with North Korea than the Trump administration—and even Tillerson’s own spokesperson—began to walk it back. The White House said there was “no change in policy.” By the end of the week, Tillerson himself said that Pyongyang had to “earn” the right to talks by suspending missile and nuclear tests.

Some analysts see a narrow window of opportunity opening up after Kim  announced that his nuclear weapons program was “completed” and United Nations Under-Secretary-General Jeffrey Feltman went on a diplomatic mission to Pyongyang early in December.

With South Korea set to host the Winter Olympics in February and no major US-South Korean military exercises scheduled in the spring, if there is a period of quiet, as Tillerson hoped for, an exploratory round of diplomacy might not be out of the question.

Tillerson’s hint of flexibility did not, however, reflect any change in the basic US policy of “maximum pressure and dialogue.” Indeed, during a UN Security Council session on December 15, Tillerson called on China and Russia to apply more pressure on North Korea beyond UN sanctions.

The more ominous question is whether American anxieties and impatience with Pyongyang are building toward US military action in North Korea. Senior Trump officials, troubled by the almost two dozen missile and nuclear tests Pyongyang has conducted this year, frequently argue that “time is running out” for diplomacy, holding out the threat of military force. Some military planners privately talk about giving Kim a “bloody nose.”

US National Security Advisor H.R. McMaster has said on several occasions that if and when North Korea obtains the capability to hit the US mainland with a nuclear-tipped intercontinental ballistic missile (ICBM), deterrence would no longer be adequate. McMaster has spoken of “preventive war” in language that is eerily similar to that used by the George W. Bush administration before it invaded Iraq in 2003.

This language is curious. US deterrence has prevented war on the Korean Peninsula since 1953, it has deterred a Soviet Union armed with 30,000 nuclear warheads and, since 1964, China’s nuclear arsenal.

Few analysts would argue with the logic that Pyongyang’s top priority is regime survival. US officials—over several different administrations—have repeatedly said that any North Korean attack on the United States or its allies would result in a swift and overwhelming military response.

Nonetheless, after major policy reviews, the Trump administration appears to view North Korea’s possession of an operational ICBM as an unacceptable threat that would trigger US military action. This regardless of the fact that a pre-emptive US strike would almost certainly trigger a North Korean military response and risk of escalation that could result in the death of hundreds of thousands—including thousands of Americans (there are some 200,000 US citizens in Seoul on any given day). Pyongyang has thousands of long-range artillery within range of Seoul, just 35 miles away.

It is not clear that US Secretary of Defense Jim Mattis agrees with those who favor pre-emptive action. He has spoken of a US use of force only in response to a North Korean attack. On December 15, Mattis disputed Pyongyang’s ability to threaten the United States, saying that its ICBM “has not yet shown to be a capable threat against us right now.”

This skepticism about North Korea’s ICBM capability is shared by a number of technical analysts who argue that Pyongyang has not as yet demonstrated a re-entry vehicle that is able to survive the heat, pressure, and thrust associated with a nuclear weapon re-entering the atmosphere, nor has a guidance system been able to hit a target.

Among Asian security analysts in the United States, the dominant view is that the least-bad policy response to a nuclear North Korea, even one that is armed with an ICBM, would be enhanced containment and strengthened deterrence. The fallacy of the “bloody-nose” scenario—a limited strike against nuclear or missile launch facilities—is that it assumes that because Pyongyang’s top priority is regime survival it will not retaliate for fear of its destruction. But North Korea is likely to respond by firing thousands of artillery shells at Seoul. Then what?

Moreover, it will take some time for the recently-implemented comprehensive UN economic sanctions to inflict serious pain on North Korea to the degree that it might change Pyongyang’s behavior. In the case of Iran, it took more than two years. Though North Korea is a far more isolated economy, it is likely to feel the pain sooner. Fortunately, we probably have at least two to three years before Kim has a reliable, operational ICBM. Developing a re-entry vehicle carrying a nuclear weapon with an accurate guidance system that can survive is very difficult rocket science.

But there is a growing fear that in its haste to “solve” the North Korean nuclear problem, the Trump administration may take action that could have catastrophic consequences.

One hopes that diplomacy will triumph. One way or another, 2018 may prove to be a decisive year on the Korean Peninsula.

Robert A. Manning is a senior fellow in the Atlantic Council’s Brent Scowcroft Center on International Security. Follow him on Twitter @Rmanning4.

Image: “The world has become so interconnected that no part of the world can actually isolate itself or compartmentalize its foreign policy issues because they all touch one another at some point.” (ImageLink)