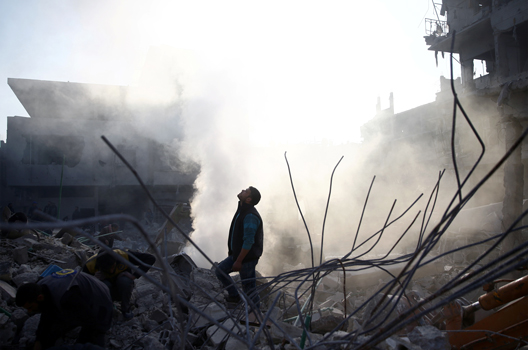 A man stands on rubble of damaged buildings after an airstrike in the besieged town of Hamoria, Eastern Ghouta, in Damascus, Syria Janauary 9, 2018. (REUTERS/Bassam Khabieh)

When protests erupted against Bashar al-Assad’s regime in Syria in 2011, no one could have anticipated the level of violence, trauma, and devastation that would result from that uprising over the next seven years.

The Syrian civil war began on March 15, 2011. The conflict has been fought by a constellation of rebel groups and militias arrayed against the Assad regime, and each other. It has expanded to include international actors—namely Russia, Iran, and the United States—propping up opposing sides.

At the outset of the war, US intelligence services estimated Assad would not last longer than six months.

Since then, a country has been nearly destroyed, and a region thrown into turmoil. Cities such as Aleppo, reduced to rubble by regime bombing, have become indicative of the state of Syria. Further, the far-reaching ramifications have severely altered the security calculus of nations around the world. Threats posed by terrorism, the migration crisis, refugees, and humanitarian horrors have all become irrevocably intertwined with the name of a once-sophisticated country and culture.

How did peaceful protests turn into one of the greatest tragedies of this generation?

To shed a bit of light on the issue, Faysal Itani, a senior fellow with the Atlantic Council’s Rafik Hariri Center for the Middle East, reflected on the past seven years of war, and where to go from here.

1. What is the human cost of this conflict?

“There is no more official count of casualties—the United Nations stopped counting. There are estimates. The one that’s thrown around most is in the vicinity of about half a million dead. We don’t really know. The truth of the matter is, with no observers and collapsed government authority, we’re not going to know how many people died for a long time, if ever.

“About half the country is displaced. As of December 7, 2017, there were 5.4 million refugees, and 6.1 million internally displaced peoples, according to the United Nations High Commissioner for Refugees. Bear in mind, lots of refugees don’t register with UNHCR, but we don’t have anything better than that.

“In terms of economic damage, the cost of rebuilding the country and returning it to its pre-war economy will be $300 billion. But, again, nobody knows. It’s not exactly a transparent environment.”

2. Who are the main players? Who is backing who?

“Obviously, the Assad regime. Then, it breaks down geographically. The main Kurdish militia is called the YPG [People’s Protection Units], and that’s in northeastern Syria. You have the FSA [Free Syrian Army] in the south, but those groups are dormant right now because their sponsors don’t want to activate them and there’s a de-escalation agreement. That’s its own micro warzone. Around the capital [Damascus], you have a couple of Islamist militias; the most prominent are Jaysh al Islam and Faylaq al Rahman. These two groups are basically besieged by the regime near the capital, but they’re pretty powerful. If you shift northward, you get two major local players. You have the Hay’at Tahrir al-Sham, which is a descendent of a derivative of al Qaeda. They’re a jihadi extremist group in Idlib. Last but not least, you have the groups that are in the Turkish-controlled Euphrates Shield territory—both Islamist and non-Islamist, but all on the Turkish payroll. They’re Turkish proxies fighting in that zone.

“There’s also Hezbollah, if you want to count that as a local actor, and Russian soldiers and mercenaries.

“No. He’s gotten much weaker, but he is still stronger than any single opponent of his. That said, he’s lost territory, men, resources, and independence. He’s much weaker than seven years ago, but not weak enough for his rivals to get rid of him.”

4. Where are the front lines of the conflict?

“Idlib is one of the more highly contested areas, as well as the suburbs around Damascus. There are still pockets of ISIS [Islamic State of Iraq and al-Sham] where there is fighting, especially on the border with Iraq. There’s also always a risk of conflict along the Euphrates River, which is the area that divides regime forces from the Kurdish, pro-United States forces.”

5. What happened to ISIS?

“A lot of US airstrikes and increased fighting capacity of the ground forces that we partnered with degraded ISIS. Don’t forget this took a long, long time. We began fighting them in 2014.

“What happened to them in Syria is that they lost their border areas, they lost their supply lines and communication, and finally they were driven out of the big cities like Raqqa. They didn’t understand they had to make alliances so they fought everyone all the time. They were never going to win. Now, they can cause a lot of damage, but they have lost control of land, resources, and influence.”

6. What is the international community doing?

“There is no international community.

“As for ceasefires, they only happen when the regime allows them to happen. The West has no leverage.”

7. How did it get to this point, and what is needed to end this war?

“It started with our calculation that Assad was going to fall anyway and the United States needed to be on the right side of history, which involved calling for Assad to step down. That is what [former US President] Barack Obama did six months after the protests started. The problem with this is that it didn’t happen, Assad did not fall. When it didn’t happen, we told ourselves that we needed to contain the conflict geographically to avoid a spillover effect. What did happen is that there was a spillover effect and we ended up getting pulled into a war with ISIS. That was chapter three.

“In the immediate sense, what’s going to happen to this country is that it’s going to become de facto partitioned. We’re going to have our chunk in the northeast under US control. The Turks are going to have the pocket they’ve carved out in the north. The south is going to be nothing much, and the rest of the country is going to be under regime control. That’s a little more clear than it was a year ago. However, all of this is contingent on a few things that can’t be taken for granted: Turkey’s deployment, peace between Iran and Israel over the Syrian border, and US troops remaining in Syria. You have to ask: how long are we going to stay in northeastern Syria?

“If I look ahead, there are seeds of future turmoil, but, for now, Assad won.”