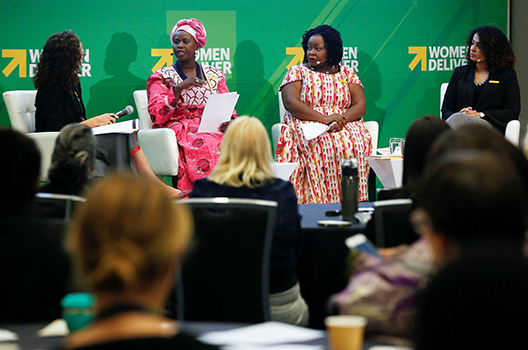 Over the course of four days in June, more than 8,000 world leaders, influencers, practitioners, advocates, academics, activists, and journalists gathered in Vancouver, Canada, to discuss how to accelerate progress for girls and women around the globe. The Women Deliver conference included important conversations about the future of work and women’s economic participation. Importantly, the debate demonstrated how the dialogue on the role of the private sector is shifting: from corporate responsibility to corporate interest and from social impact to bottom line impact—and increasingly both.

In developing countries, 90 percent of paid work is in the private sector—for women, opportunities fall largely in the informal economy. Conversations at the conference centered on how businesses can drive more inclusive economic growth and create opportunity for women around the world—often in collaboration with governments, international institutions, non-governmental organizations, and civil society. As Alan Jope, chief executive officer of Unilever, said “the ability to partner with large, global organizations is an essential part of the way the private sector can impact gender equality.”

The focus on economic empowerment and participation at Women Deliver was driven by troubling data points in the global economic landscape. The World Economic Forum Global Gender Gap Index predicts it will take 107 years to close the gap in the economic participation and opportunity dimension. According to Landesa, a nonprofit that secures legal land rights for the world’s poorest families, women own less than 15 percent of the world’s land. The latest World Bank Findex, last issued in 2017, found that the financial inclusion gap in terms of having a bank account between men and women in developing economies remains at nine percentage points—unchanged since 2011 and stymying entrepreneurial growth. In several countries – even those that are in the middle-income strata – this gap is much more significant.

Across several talks and panels at the conference the levers for private sector impact on inclusive economic growth fell into four main avenues: workplace practices, procurement practices, investment and financing practices, and advocacy and community practices. In the workplace, companies are revisiting human resources and operational policies and procedures to attract, retain, and nurture female talent. This includes robust health and childcare offerings, mentor and leadership opportunities, flexible schedules, and zero tolerance toward harassment. In lower- and middle-income or more rural communities, services could also include transportation.

Through their procurement practices, companies are opening up their value chains, increasing spending with female suppliers, small-holder farmers, female cooperatives, and women-owned micro-, small-, and medium-sized enterprises. This lever is especially important in supporting women in low- and middle-income communities and countries who are more likely to be entrepreneurs, self-employed, or in the informal sector.

From microloans to venture capital, financing and investment practices that extend credit or share equity in female-owned companies are increasingly becoming an asset in the private sector’s inclusive growth toolbox. Gender-lens funding also includes supporting research and product development to create goods, technologies, or financial services (such as banking or insurance) that enable women to build and protect economic assets. Suzanne Biegel, founder of Catalyst at Large, a gender lens investing consultancy, said that “the market is going in the direction of women having access to capital themselves to be investors. Women who are making purchasing decisions, women as innovators, product designers, women who are in leadership, women who are really driving decision making from a governance standpoint, this is where it’s going.”

Finally, the private sector can contribute to women’s economic empowerment by leveraging its branding, communications, advocacy, and social community practices to shift social norms and consumer awareness and attitudes toward women’s economic participation. This may take the form of supporting girls’ education—especially in science, technology, engineering, and mathematics—promoting women in non-traditional sectors, using socially conscious campaigns and advertising, and sharing data to influence policy. With these practices, companies also recognize the link between women’s health care, social empowerment, and economic opportunity. “We have an aspiration to create a world free of gender bias,” said Allison Tummon Kamphuis, the global program leader for gender equality and the Children’s Safe Drinking Water Program at Procter & Gamble. “We leverage our significant voice in advertising with campaigns that reveal gender bias and insights that can spark conversations that motivate change,” she said.

Challenges are only one side of the coin. On the other: opportunity. In its 2015 landmark report, the McKinsey Global Institute (MGI) found that if the female labor force participation rates in each country rose at a pace equal to the most rapidly improving country in their region, then global gross domestic product (GDP) could increase by $12 trillion over ten years. Similarly, the International Labour Organization estimates that reducing the gender gap by 25 percent would increase global GDP by $5.8 trillion by 2025, with much of this growth attributed to emerging economies where the gap is the widest. To help 2019 Women Deliver participants look to the future, MGI launched a new report, “The Future of Women at Work: Transitions in the Age of Automation.” According to MGI, women could find more productive, better-paid work if they are able to gain skills and transition to the more digital and Fourth Industrial Revolution sectors. If not, they could face a growing wage gap or be left farther behind. To this end, young women in particular may be able to leapfrog traditional skills building and employment models to work in the digital economy where they may not face as many barriers as either wage work or informal sector work.

Women should be both benefitting from and contributing to this economic growth. The conversations and commitments—such as Johnson & Johnson’s goal to reach one million girls with the support of NGO partner FHI 360 and through programs like Bridge to Employment—at Women Deliver show that the private sector is and will continue to be critical to catalyzing more inclusive growth through multiple levers they can pull on their own, and in collaboration with the public and third sectors.

Nicole Goldin is a nonresident senior fellow in the Atlantic Council’s Global Business and Economics Program and Director and Lead Economist, Economic Participation at FHI 360. Follow her on Twitter @NicoleGoldin.