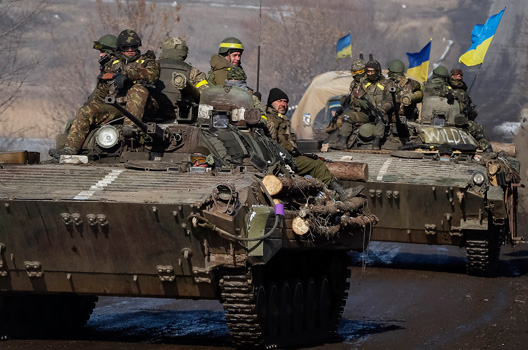 A new deal that would end the fighting between Ukrainian security forces and Russian-backed separatists is being met with skepticism amid an escalation in the conflict in eastern Ukraine.

“This is essentially the same ceasefire that failed before, so I expect the same issues to arise: Kyiv’s control of the border, lack of removal of non-Ukrainian weapons, and military personnel, etc.,” said Frances G. Burwell, Vice President and Director of the Atlantic Council’s Program on Transatlantic Relations.

“But what may be very problematic is the length of time between now and the coming into force of the ceasefire on February 15, during which the separatists will undoubtedly seek to improve their military position,” she added.

The ceasefire was reached after more than sixteen hours of negotiations between the leaders of Russia, Ukraine, Germany, and France in Belarus’ capital Minsk on February 12.

German Chancellor Angela Merkel said the deal provided “a glimmer of hope, no more no less.”

The Obama administration, which was not part of the talks, expressed cautious optimism about the deal as Russian-backed separatists sought to drive home their military advantage around Debaltseve in eastern Ukraine.

The US is “particularly concerned about the escalation of fighting today, which is inconsistent with the spirit of the accord,” said White House Press Secretary Josh Earnest.

Merkel said Russian President Vladimir Putin agreed toward the end of the talks to put pressure on Russian-backed separatists to stop the war.

“The true test of today’s accord will be in its full and unambiguous implementation, including the durable end of hostilities and the restoration of Ukrainian control over its border with Russia,” Earnest said.

Besides a ceasefire, the agreement includes the withdrawal of heavy weapons from the front line and constitutional reform to provide greater autonomy to eastern Ukraine.

The agreement, while much needed by the people of Ukraine, has some troubling elements, said Adrian Karatnycky, Nonresident Senior Fellow in the Atlantic Council’s Transatlantic Relations Program.

“An open border for the next year will allow Russia to build a powerful military Donbas satellite populated by Russian and Donbas fighters, equipped with modern weapons: a modern day Sparta to menace Ukraine when needed,” he said.

The deal provides no timetable for the demilitarization of the Donbas region in eastern Ukraine and there are serious differences on the interpretation of what decentralization means, said Karatnycky.

Such differences will lead to disputes in the negotiations and likely lead to their breakdown, he added.

If the Donbas rebels’ interpretation of the agreement were to be implemented, Russian fighters now in the Donbas will be naturalized by the local authorities and in a year or two this will permit Putin to order these forces to march on Kyiv and claim that it is not an invasion, but another coup led by local Ukrainian officials and the “people” of eastern Ukraine, angered by the pro-Western policies of the Kyiv regime, said Karatnycky.

He said the deal reached in Minsk is a weak one that is most likely to unravel. It does, however, provide a breather during which the West can prepare to provide large allotments of lethal military aid in the event the ceasefire breaks down and the Russian-backed offensive resumes, he added.

Burwell was not confident that the ceasefire agreement would stick, but said the negotiation process had “been key to maintaining a strong European consensus on this issue, especially given the stance of the new Greek government.”

At the White House, Earnest said the deal “represents a potentially significant step toward a peaceful resolution of the conflict and the restoration of Ukraine’s sovereignty consistent with the Minsk agreements from last September.”

Rebels had promptly violated the ceasefire agreement reached in September.

All parties must now take concrete steps to fulfill their commitments, the ceasefire must be implemented and honored; heavy weapons must be withdrawn from the conflict zone; and Russia must end its support for the separatists and withdraw its soldiers and military equipment from eastern Ukraine, said Earnest.

The US and EU have used the stick of economic sanctions in an attempt to deter Russia’s actions in eastern Ukraine.

The European Union had threatened to impose new sanctions on Russia and Russian-backed separatists, while the Obama administration is weighing whether to provide arms to the Ukrainian security forces.

The new agreement in Minsk may have stalled those decisions for now, but that could change if the truce falls apart.

“If the ceasefire fails, I expect to see a renewed push for stronger sanctions from Europe, and there will be no doubt about renewal of the existing sanctions. If the ceasefire fails, there will also be more pressure from Congress for the administration to provide defensive military assistance to Ukraine, but I am not sure that the White House will agree,” said Burwell.

“But whether or not the US—or other European countries—decide to arm Ukraine, it will not affect transatlantic solidarity over sanctions in the wake of another failed ceasefire,” she added.

Image: Ukrainian troops ride on armoured personnel carriers near Debaltseve, eastern Ukraine, on February 12. Germany, France, Russia, and Ukraine agreed to a deal on February 12 that would end the fighting between Ukrainian forces and Russian-backed separatists. (REUTERS/Gleb Garanich)