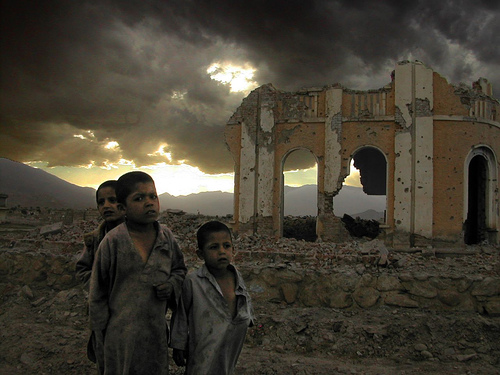 Former Afghan finance minister Ashraf Ghani — a member of the Atlantic Council’s International Advisory Board — calls for a Marshall Plan for his country in an op-ed in today’s Independent.   He argues that “The Obama Presidency provides a second chance to get Afghanistan right” and that the way to turn around this failed state is to invest in its people.

The spread of corruption and bad governance imposes injustices, and often daily hardships, on ordinary Afghans, whose hopes for better lives are frustrated by the lack of services. These citizens want their current and future governments to be accountable.

Has there ever been a time when corruption, bad governance, injustice, hardship, and lack of services wasn’t the norm in Afghanistan?

Containing the threat of narcotics to the region and the world requires a bold economic approach. The break point between illegal and legal economies is a legal income of $4 per capita per day. In order to reach this threshold in Afghanistan, three major sectors of the economy must be revitalised: mining, agriculture, and services. Afghanistan is rich in minerals including copper, iron, marble, chromite, manganese and emeralds. With good governance in place, these assets can generate funds. Connecting farmers to markets through careful investment, organisation and infrastructure would provide livelihoods in rural areas. In urban areas, a fresh approach to municipal governance could mobilise the service industry, particularly construction, to create jobs. If Europe wanted to do more, a package of trade and enterprise partnerships could be as significant as any commitment of troops. And in the medium and long term, the most effective investment of all will be education and vocational training programs for the rising generations. Used for this purpose, one month of current military expenditures could change the life opportunities of five generations of Afghans.

“Revitalized” is not the right word here, in that it implies that the economy was once thriving. Nor is it at all clear how one would go about instituting “a fresh approach to municipal governance” in a tribal society.

Still, it’s hard to argue against investing in human capital in a society with a median age of 17.6, an adult literacy rate of 36 percent, an unemployment rate of 40 percent, and where two-thirds live on under $2 a day. Surely, even a relatively modest investment in education and training would be beneficial.

It’s also indisputable that having a third of the economy based on illicit drugs — especially when the lion’s share of that goes to funding terrorists and thugs — is unproductive. Given the dismal history of counternarcotics campaigns, however, it strikes me that something along the lines of the “poppies for peace” program outlined by Peter van Ham and Jorrit Kamminga [PDF here] — employing people producing poppies for licit uses — would be much more productive than an attempt at eradication.

The instruments currently used by the international community in Afghanistan, however, are part of the problem. The system can be made effective and efficient by eliminating the tens of thousands of scattered efforts, which create waste and parallel structures, and instead unifying foreign aid behind the single instrument of the Afghan national budget. The government and its international partners should delineate a set of objectives to deliver a dividend to the population and establish clear rules for accountability and transparency, including the creation of joint decision-making committees that bring international figures together with Afghan civil society and business oversight. This kind of partnership will require a new design for the use of aid, by a group similar to that which designed the Marshall Plan.

In theory, a unified approach would seem sensible, avoiding duplication of effort, eliminating bureaucratic bloat, and establishing economies of scale. But what sense does it make to centralize massive funding into the hands of a state that the author admits is characterized by “corruption and bad governance”?

Beyond that, the Marshall Plan was applied to a radically different endeavor than faced here. In 1947, the United States wanted to get Western Europe back on its feet. The most modern, developed states in the history of the planet had been devastated by war and were in serious danger of falling into the Soviet orbit. Their infrastructure had been destroyed and in some cases they were cut off by the Iron Curtain from former food suppliers and major trading partners. The Marshall Plan, therefore, was simply a rebuilding effort.

Afghanistan has not been a modern state since the dawn of the very concept of modernity. Indeed, a large part of the problem is thinking of “Afghanistan” as a state at all; it’s a collection of city states and tribal lands which happen to share a border thanks to colonial mapmakers.

By all means, let’s continue to invest in Afghanistan’s people.  Ghani’s goal of a licit income of $4 a day is quite reasonable.  But the idea that Afghanistan is going to become a modern, developed state in the lifetime of anyone now living borders on absurd.