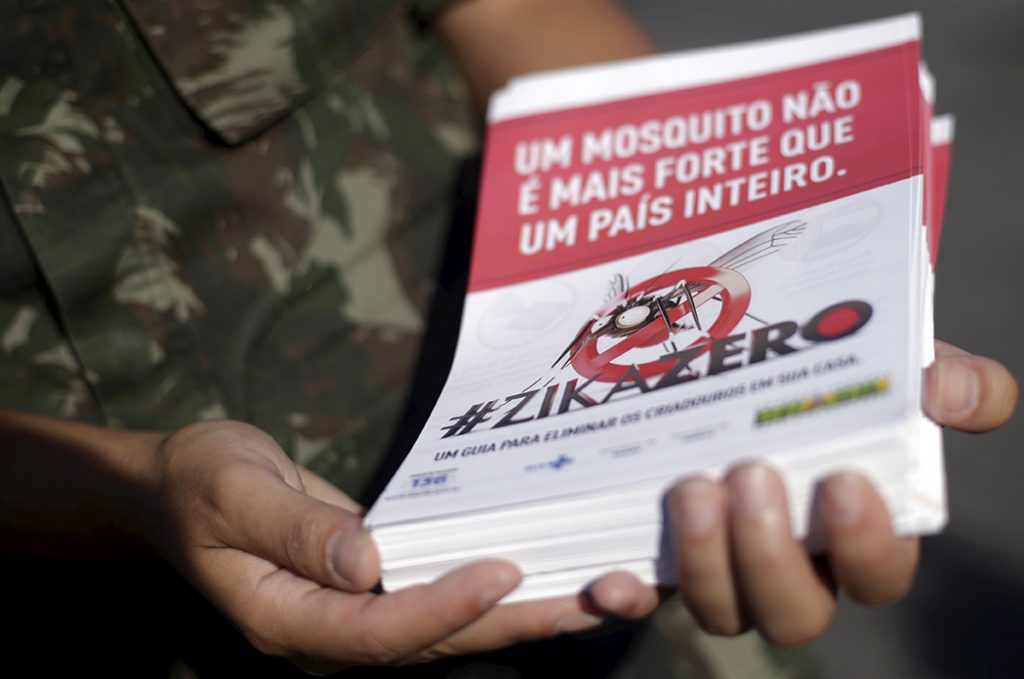 A Brazilian soldier shows a pamphlet to be distributed among the public following a ceremony to mark the graduation from training on how to combat the Aedes aegypti mosquito, which transmits the Zika virus, in Rio de Janeiro, Brazil, on February 12. The pamphlet reads, “A mosquito is not stronger then an entire country.” (Reuters/Ricardo Moraes)

There is never a good time for an epidemic, but Brazilian President Dilma Rousseff will agree that the outbreak of mosquito-borne Zika in her country could not have come at a worse time.

Rousseff, who is facing impeachment charges, has been the target of massive rallies in Brazil at which protesters have demanded her ouster. Brazil is facing one of its worst recessions ever and Rousseff has been accused of doing too little too late to address this severe economic downturn.

“Zika will be a problem for Rousseff because it will remind Brazilians of one more negative affliction facing their country. It is like the ten plagues,” said Peter Schechter, Director of the Atlantic Council’s Adrienne Arsht Latin America Center.

The Zika virus, which is transmitted by the Aedes aegypti mosquito, has been linked to a spike of microcephaly, a birth defect marked by an abnormally small head. The World Health Organization declared an international health emergency on February 1, and the US Centers for Disease Control and Prevention (CDC) has advised pregnant women or those considering becoming pregnant to avoid travel to places with Zika outbreaks.

This health crisis comes at a time when the Brazilian city of Rio de Janeiro is gearing up to host the 2016 Summer Olympic Games in August. More than 500,000 people, many of them Americans, are expected to travel to Brazil for the Games. Zika could put a damper on those plans. The US Olympic Committee has told US sports federations that athletes and staff concerned for their health should consider not traveling to Rio in August. The US Olympic Committee denied those reports, still at least one country, Kenya, could pull out of the Games altogether.

Zika could deal another economic blow to Brazil whose economy is already projected to shrink by 3.5 percent this year.

“This is only going to further add to the economic doom that pervades across Brazil—less from a Brazilian domestic perspective, but more from the perspective of a foreign investor who sees this virus as an another instance of a general sense of uncertainty in Brazil,” said Jason Marczak, Director of the Council’s Latin America Economic Growth Initiative.

Peter Schechter and Jason Marczak discussed the challenges that the Zika epidemic poses for Brazil and an embattled Rousseff in an interview with the New Atlanticist’s Ashish Kumar Sen. Here are excerpts from the interview.

Q: The Zika epidemic comes at a time when President Rousseff is facing calls for her impeachment and is grappling with a recession. Has this epidemic taken some of that political heat off of her?

Schechter: In no way has it taken the political heat off her. She continues to be very low in the polls and embodies a government that cannot get anything done because all of its congressional coalition partners are either bolting, hiding under the table or directly plotting against her. The heat is on her and the only reason we haven’t had it in the headlines is because it is summertime in Brazil. Congress, which is on vacation, resumes at the end of February. I fully expect the heat to be turned to a high boil and Zika will be simply one of a litany of problems that will land on her lap.

Zika will be a problem for Rousseff because it will remind Brazilians of one more negative affliction facing their country. It is like the ten plagues. But I don’t think that this either helps or massively hurts her. She has enough problems as it is.

Marczak: No President wants the distinction of having your unemployment rate be higher than your popularity rate, which is the position that she is in. This is the last thing that she wants. She is dealing with the worst economic downturn since the 1930s, a political crisis and corruption case that are never-ending, and now you throw on top of that a health crisis. She is already dealing with a very untenable economic situation and this is only further sapping confidence, especially from the international community. Brazilians still went out on the streets this past week with their shirts off celebrating Carnival. So the effect is really on international tourists. Thankfully for Brazil, because of the economic downturn, Brazilians who are traveling are staying domestic rather than going abroad, so while you have less international tourists there is at least somewhat of a bump from Brazilian tourists.

Q: What is your assessment of the Rousseff administration’s response to the Zika epidemic?

Schechter: The government has mobilized on a number of fronts both in terms of research as well as in terms of attacking the mosquito itself, and communications campaigns to warn people about what symptoms to look out for.

The city of Rio has a huge interest here because of the Olympics in August. This is a very difficult war to wage against a mosquito that has been at the center of the world’s attention first with malaria, dengue, chikungunya, and now Zika. We haven’t made much of a dent against this mosquito.

Marczak: Back in the late 1940s, Brazil almost eradicated the mosquito. They were so close, but Brazil specifically stopped some of the sanitation programs that had helped prevent the spread of the mosquito. The problem for the country is that no one knows what is going on or how the disease is transmitted. There is a general sense of fear and unknowing. And then there is an inconsistency in determining the extent of the problem because different states measure microcephaly in different ways. There are these different attempts to try to eradicate the disease—genetically modified mosquitoes, for example, which would help eliminate the mosquitoes that carry the virus. Some of these are cockamamie attempts.

Q: The US Olympic Committee told US sports federations that athletes and staff concerned for their health over the Zika virus should consider not going to the Rio 2016 Olympic Games in August. What is your assessment of the international reaction to Zika?

Schechter: These things tend to take on an ominousness at a distance that they perhaps don’t have up close. Carnival has gone off without a hitch. There were no less people in the streets. It is an important part of the discussion, but it is not taking on the same disproportionate hugeness that corruption scandals have taken on in Brazil.

Marczak: I see this as an issue far beyond Brazil. We talk about the future of Latin America. Is it going to be an integrated Latin America? This really is an opportunity for the region to come together and figure out how to tackle the virus and work together to try to eradicate the mosquito. It also gives Brazil an opportunity to do something it rarely does, which is to play a leadership role on a regional issue.

Q: The timing of this epidemic couldn’t be worse. Brazil will be hosting the Olympics this year. What’s at stake for Brazil if it is unable to bring this crisis under check quickly?

Schechter: I think nature will do a lot to mitigate the circumstance. It is my understanding that the mosquito reduces its presence massively during the winter months in Brazil. The international response has been confused because nobody quite knows what is happening; it has certainly been uncoordinated. There is no sign that there has been any coordination between the International Olympic Committee, which lives in the same country as the World Health Organization.

It has been a difficult and confused time. I am hopeful that with the increasingly cold temperatures and some progress made to try to figure out where the disease is going, the Olympics could proceed. It would be devastating for Brazil if these Olympics were marred by a preoccupation with the disease.

Marczak: I don’t want to undermine the severity of the health crisis, but I think that we also have to take into perspective the inherent nature of international community to overreact to the health crisis du jure. This is the reality of modern times. We live in a globalized world where a health crisis that starts in a market in China will quickly spread far beyond that. The answer is not overreaction.

At the Republican debate last week there was a question about whether the candidates would quarantine Americans who travel back from Brazil after attending the Olympics. That is just plain out silly. Rather than helping the situation it further invokes fear, which doesn’t solve any problems. What you really need is a coordinated response with all the health organizations figuring out how this disease is transmitted, and what are some short-term and long-term programs to deal with it.

The Brazilian economy is already projected to shrink by 3.5. percent this year. This is only going to further add to the economic doom that pervades across Brazil—less from a Brazilian domestic perspective, but more from the perspective of a foreign investor who sees this virus as an another instance of a general sense of uncertainty in Brazil.

Q: Are the Brazilians looking to the Olympics to help remedy some of the economic downturn in the country?

Schechter: The Olympics, unlike the World Cup, is not a Brazilian event. It is an event in Rio. The impact on the rest of the country is not enormous, but it is a reputational impact.