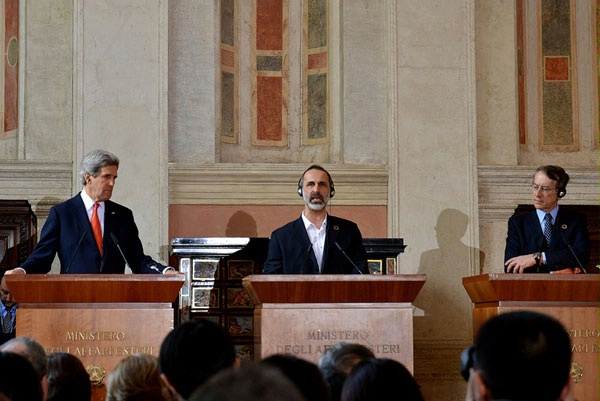 To most Americans, Syria looks like a mess best left to Syrians and their neighbors to sort out. Yet the conflict that President Bashar al-Assad unleashed against his people threatens to produce a large, ungovernable space, with refugees racing for the borders; terrorists setting up shop; chemical and biological weapons unguarded and available for seizure; and many of Syria’s 22.5 million people targeted for detention, torture, forced displacement and even murder because of sectarian identification.

Although there are no simple solutions to this sizable mess, something could be done, soon, to mitigate a bloodbath and perhaps avoid a Somalia-like failed state: The United States and its partners can support the mainstream Syrian opposition in establishing a legitimate, functioning government on liberated Syrian soil.

Syria’s descent into chaos began nearly two years ago. Millions of economically marginalized Syrians had long watched with sullen passivity as a young president promised reform while his avaricious relatives accumulated wealth under the protection of government security services. Peaceful protests broke out in 2011 after teenagers writing political graffiti were arrested, tortured and denied access to alarmed parents. When Assad responded by permitting police to shoot protesters, he tossed a lighted match on the dry tinder of economic grievance. The flames were fanned by social media, headlining the contempt the regime felt for ordinary Syrians.

That the family in charge came from Syria’s Arab Alawite minority — which accounts for just 12 percent of the population, while most of the aggrieved were Arab Sunni Muslims, who make up two-thirds of Syria’s population — eventually shifted the character of the conflict in ways that have yet to be fully appreciated in the United States. When Assad chose violence over conciliation, he deployed both official armed units and criminal gangs that were overwhelmingly Alawite to do his bidding. Most of Syria’s military has remained on the sidelines, disgorging defectors. By reacting as he did, Assad transformed peaceful protest into armed resistance and plunged Syria into a sectarian cauldron in which civilians are increasingly targeted for violence and outright killing based on their religion.

Assad’s mainstream opponents, armed and unarmed, still try to resist taking the regime’s sectarian bait. Yet regime tactics have given rise to a radical, jihadist presence alongside the mainstream armed opposition, one whose tactical proficiency and anti-Alawite sectarianism have alarmed all Syrian minorities.

By using largely Alawite forces to terrorize largely Sunni Arab population centers, Assad knowingly runs the risk of setting up Alawite noncombatants for reprisals. Nearly all of the Syrians killed, injured, incarcerated and tortured because of their sect have been Sunni Muslims. To some Syrians, Assad has implicated his own sect in acts that are unspeakable. In fact, very few Alawites have anything to do with the regime’s criminality. Yet Assad’s intent is to make them complicit, persuade them to fight for him and convince his countrymen, as he pumps mortar rounds, artillery shells and Scud missiles into residential neighborhoods, that he alone stands between them and foreign terrorists intent on slaughtering minorities. This takes cynicism to new depths.

It is urgent that this reckless regime be terminated and replaced with something dedicated to the rule of law, citizenship, civil society and minority protection. Syria’s mainstream opposition, already recognized by the United States and others as the legitimate representative of the Syrian people, is debating whether to set up a functioning government on Syrian soil — one that could serve as a credible, attractive and reassuring alternative to the Assad regime; one that could appeal to minorities as a coherent, decent government instead of a disjointed opposition; one that could form the core of an eventual government of national unity. Its members hesitate because they are unsure of U.S. support. Indeed, this uncertainty may have caused or contributed to Sunday’s announcement by the Syrian Opposition Coalition’s president that he is stepping down.

Such a government would need recognition, financial support, technical assistance and help with self-defense (well short of U.S. “boots on the ground,” something no one in the opposition wants). It is no wonder that Washington hesitates: The commitment of time and resources, even with partners doing most of the heavy lifting, would be considerable. And, yes, advanced, stand-off weaponry might have to be employed to dissuade the regime from terrorizing civilians under the new government’s jurisdiction. Tough decisions will be required.

Yet absent a nonsectarian government in Syria, one dedicated to protecting vulnerable populations and serving as an alternative to Assad, the likelihood of state failure and sectarian chaos in Syria will continue to grow. As hard as the challenges are now, they could soon become unmanageable. A credible alternative to Assad is desperately needed. It will not happen without U.S. encouragement and support.

Frederic C. Hof is a senior fellow of the Rafik Hariri Center for the Middle East at the Atlantic Council and the former special adviser for transition in Syria at the US Department of State. This piece first appeared in The Washington Post.