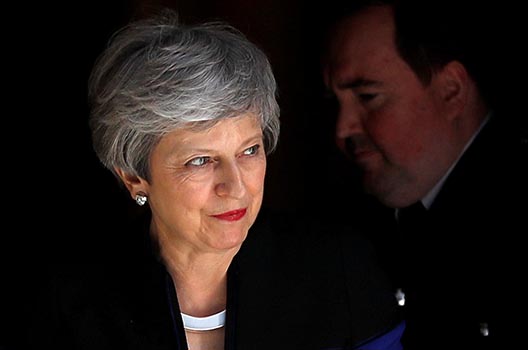 British Prime Minister Theresa May has effectively signed her own political death warrant. The question now is whether she has also signed the warrant for the death of Brexit.

After weeks of stagnation and accusations that Britain had a zombie government and parliament, suddenly everything is moving again at almost lightning speed.

On May 17, Opposition leader Jeremy Corbyn pulled the plug on talks between his own Labour party and May’s Conservatives. But while there were key points of difference—notably regarding Labour’s insistence that the United Kingdom should remain in a customs union (with a subsidiary objection that the Conservatives support of new free trade agreements would result in imports of chlorinated chicken from the United States)—it turned out that there were some surprising points in common. The most striking was that both May and Corbyn wanted to see the United Kingdom leave the European Union by July 31, and that they were prepared to join forces to ensure that there would be no risk to this being thwarted by the holding of a second referendum.

The day before, May finally succumbed to the inevitable, suffering further indignity as the inevitability of her departure was outlined in a terse press release issued after a meeting with the chief officials of the ruling Conservative Party’s all-important 1922 Committee—whose membership simply consists of all the party’s elected representatives to the House of Commons—in which she acknowledged she would be quitting her position after one last final effort to secure parliamentary approval for her Brexit bill.

It was a masterpiece of British understatement, a single sentence in a press release issued after their meeting by the 1922 Committee chairman, Sir Graham Brady. It read: “We have agreed that she and I will meet following the 2nd Reading of the Bill to agree a timetable for the election of a new leader of the Conservative and Unionist Party.”

In other words, no matter how the vote goes when May’s bill to implement the Withdrawal Agreement she signed with European Commission last November is introduced in June, she will then set in motion the process for choosing her successor.

For Brexit itself, the paradox is that by finally acknowledging that she will be going once a vote has been held on her deal, the prime minister seems to have finally killed off what little chance there still was of parliamentary approval for the Withdrawal Agreement itself, thus reducing the Brexit imbroglio to a stark binary choice: leave the European Union with no deal at all—or remain.

In effect, May has incentivized the critics and rivals in her own party to vote down the deal, so they can get on with the business of choosing a new leader, and that new leader will either be elected on a ‘No Deal’ platform, or will at least have to court an increasingly ‘No Deal’ Conservative Party membership.

Indeed, May’s rivals are already preparing themselves for the fight to succeed her, with Boris Johnson, who resigned his position as foreign secretary because he could not accept May’s deal, swiftly moving into pole position on May 16 when he announced that he would contest the leadership.

There had been some speculation that May had been hoping to secure approval for her bill on the basis that while many of her own MPs would vote against it, this would be offset by a few opposition Labour MPs voting in favor and the bulk of the Labour’s parliamentarians abstaining.

However, not only has Labour now abandoned the Brexit talks with the government, but the leaders of its negotiating team have said the party will vote against May’s deal while the party’s expert fence-sitting leader is being forced to come down from his precarious perch and start publicly supporting a second referendum—unless, by some miracle, he was able to secure a general election instead.

But neither the Conservatives nor Labour are in any shape for a general election. Current polls for both the European election to be held on May 23 and for a potential general election show both major parties hemorrhaging support. The European elections look increasingly likely to result in a massive win for the new Brexit Party headed by arch-Brexiteer Nigel Farage, with the pro-remain Liberal Democrats challenging Labour for second place, and the pro-remain Greens challenging the Conservatives for fourth place. While this would not necessarily be replicated in a general election, since European elections are held on a proportional representation basis which aids new parties while Westminster elections are on a first-past-the-post basis which favors the traditional major parties, the polls do demonstrate a massive loss of popular faith in Britain’s political elite.

Meanwhile, we are back at the point at which parliamentary arithmetic once again raises its ugly head. There is a minority government, there is no overall majority. Whatever happens in terms of a new Conservative leader and prime minister, their ability to promote a ‘No Deal’ agenda will remain limited. Whatever happens, the likelihood is that parliament will reject a ‘No Deal’ exit in practice, just as it has already done when parliament voted on March13 by 321 to 278 to reject the principle of leaving without a deal.

The big question now is whether there is a parliamentary majority for anything. If there is not, and that seems to be the case, then the prospect of a second referendum looks bound to grow.

And in this uncertain political climate, it appears to be a toss-up as to whether UK voters would opt to leave the European Union without a deal or, after three years of political chaos, choose to remain.