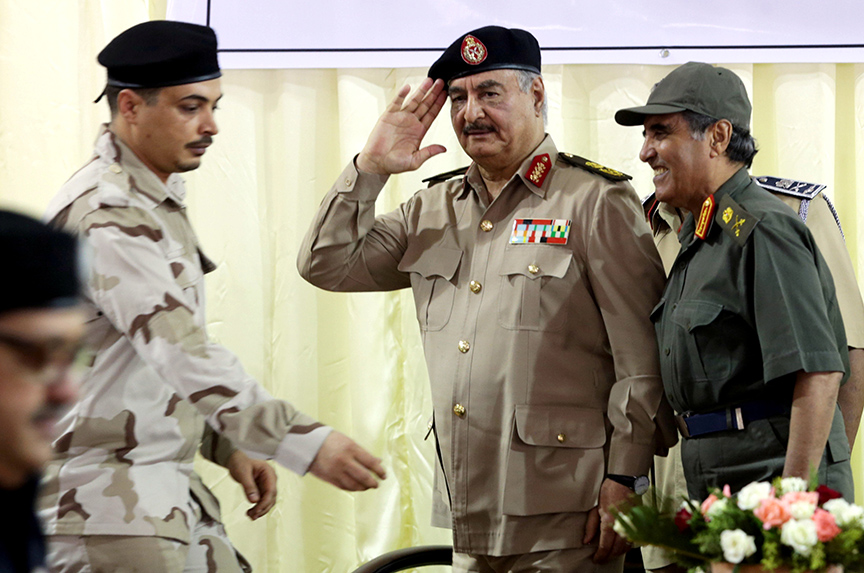 Reports that Libyan Gen. Khalifa Haftar is in a coma will deepen the chaos in a country that has been in flux for the past seven years. Haftar is a military strongman whose forces have fought Islamist militias, but has himself proven to be an obstacle in efforts to unite Libya.

Media organizations reported that Haftar had slipped into a coma after suffering a stroke. He was flown to Paris earlier in April after falling ill in Jordan.

If Haftar is incapacitated, or dead as some unconfirmed reports suggest, it could create a vacuum which would be hard to fill, said Karim Mezran, a resident senior fellow in the Atlantic Council’s Rafik Hariri Center for the Middle East.

“There are no figures of Haftar’s stature who can control special forces, tribal groups, and Salafists all at once,” Mezran said.

Haftar has close ties to the United States.

In the late 1980s, Haftar was captured by Chadian troops during Libya’s war with Chad. While in Chad, Haftar turned against Moammar Gadhafi and led a Central Intelligence Agency (CIA)-backed effort to oust the then-Libyan leader. When the plot failed, Haftar went to Virginia, where he lived for two decades becoming a naturalized US citizen.

In 2011, Gadhafi was overthrown and killed in the Arab Spring uprising. Haftar returned to Libya.

Since Gadhafi’s fall, Libya has been gripped by chaos marked by rival power centers, warring militias, and a human trafficking epidemic that poses a challenge to governments and communities across Europe and North America.

“Haftar is the one who has been capable of uniting a whole section of eastern Libyan society, armed forces, and tribal groups in an operation against Islamists in the eastern provinces,” said Mezran.

In this, Haftar has the support of Egypt and the United Arab Emirates.

“To the Egyptians and the Emiratis, Haftar represents a guarantee that the eastern part of Libya will not fall into the hands of the Islamists,” said Mezran.

The Libyan National Army, which Haftar leads, “is, in fact, a ragtag army composed of a mix of disparate troops whom Haftar has been able to keep together,” said Mezran.

Haftar’s forces have been accused of torture and executing prisoners. However, they have also been instrumental in kicking Islamist militias out of Benghazi—Libya’s eastern city where US Ambassador Chris Stevens was killed in an attack on a diplomatic compound on September 11, 2011.

It is no coincidence that Haftar was flown to Paris after falling ill.

While the United States has in recent years sought to keep its distance from Haftar, he has been embraced by Europe. France, in particular, has played a critical role in Libya. Last year, French President Emmanuel Macron brokered a meeting between Haftar and Fayez-al-Serraj, the prime minister in Libya’s United Nations-backed Government of National Accord (GNA). At a meeting in Paris, Serraj and Haftar agreed to hold elections, but nothing came of that agreement.

Haftar has refused to accept the legitimacy of Serraj’s internationally recognized government. His forces control large swathes of territory in the eastern part of Libya and have steadily gained ground. Last summer, backed by the United Arab Emirates and Egypt, Haftar’s forces claimed victory over armed rivals in the battle for Benghazi.

Mezran said if the power structure in eastern Libya collapses it could unleash a deadly cycle of violence similar to the kind that gripped the region between 2012 and 2014.

Another consequence of Haftar’s absence will be its impact on the United Nations-sponsored dialogue between Haftar and Serraj. “If Haftar disappears, will this process have a better or a worse chance? This is a big question,” said Mezran.

“Haftar never wanted a political solution. He was looking for a military solution—a moment where he could have staged a military coup and seized power,” he added.

In December of 2017, Haftar said he would no longer recognize the Libyan Political Agreement, which was signed in Skhirat, Morocco, in 2015. “The military institution will not submit to any party unless it has gained its legitimacy from the Libyan people,” Haftar said in a televised speech at the time.

Haftar rejected the Government of National Accord and Presidency Council headed by Serraj and said his own Libyan National Army (LNA) was now the “sole legitimate institution” in Libya.

While Haftar was an obstacle to the success of this diplomatic process, Mezran said a weak successor may not be capable of delivering on any agreement.

How should Serraj’s government prepare in the event of Haftar’s absence?

Mezran said the Serraj government should recognize Haftar’s successor, but only if he recognizes the legitimacy of the GNA.

As to who will succeed Haftar is unclear.

Major-General Abdul Razzak Al-Nazhuri, the governor of Cyrenaica province, is Haftar’s second in command in the LNA.

“But he is not Haftar. Not every component of the Libyan National Army likes him,” said Mezran.

The international community, Mezran said, should try and work with Haftar’s successor to comply with the Libya political agreement, recognize Serraj’s government, and start serious negotiations to unify the country.

“Haftar is a guy with a huge ego, but in the end, he is a Libyan patriot. He never wanted the division of the country,” said Mezran.

Image: Gen. Khalifa Haftar (center), the commander of the Libyan National Army, is reportedly in a coma after suffering a stroke. His illness is expected to deepen the chaos that has gripped Libya since the ouster of its longtime leader Moammar Gadhafi in 2011. (Reuters/Esam Omran Al-Fetori)