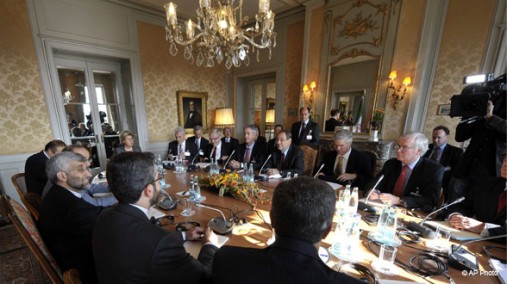 It is still early in the second term of the Obama administration, and as with the beginning of all presidential terms, hope springs eternal in political circles that longstanding obstacles to policy progress will be swept away. In that spirit, a host of commentators are calling for the United States and Iran to make a renewed effort to resolve the differences between them.

Calls for the two countries to engage in talks have become especially insistent given the concern that Iran continues to make progress in its apparent effort to acquire nuclear weapons. Because of the urgency that issue, the United States may be tempted to make it the sole focus of talks with Iran. But a singular focus on the nuclear issue may not serve American interests well.

Both countries will use high profile negotiations to rally world opinion to their side; favorable public opinion will, after all, make it easier for the recipient of that public opinion to achieve its goals. In order to successfully rally world opinion to its side, United States would do well to make negotiations touch on a multitude of subjects that will serve to cement Iran’s image as a rogue state in the eyes of the international community. In particular, the United States should highlight the many human rights abuses that go on regularly in Iran, and make the case that through oppression of its people, the Iranian regime should be a pariah in the international community.

This tactic has a historical parallel. During the Cold War, the United States was able to enhance its standing in the international community and its negotiating position by pointing out repeatedly in Soviet-American summits that the Soviet Union habitually violated the rights and freedoms of its citizens. This caused the bulk of world opinion to turn decisively against the Soviet Union, which doubtless served to weaken the Soviet negotiating position on other issues as well. Thus, in addition to promoting human rights—itself a worthy project—the United States was able to use human rights as a tool of realpolitik to further other interests as well.

Similarly, pointing out the depth and breadth of Iranian human rights abuses could put the Iranian regime on the defensive in any talks with the United States. Such discussions should highlight the stolen 2009 presidential election; the murder, harassment and imprisonment of members of the Green Movement, which is dedicated to reforming the Iranian political system; the commission of outrageous and barbaric punishments of accused criminals that are entirely out of proportion to the crimes they are alleged to have committed; and the imprisonment and killing of dissident online activists. Additionally, the United States can take Iran to task over efforts to hinder the education of Iranian women and efforts on the part of the regime to engage in massive amounts of Internet censorship that would serve to cut Iran off from the rest of the world.

Additionally, the United States can pressure Iran to stop the assistance that it gives the regime of Bashar al-Assad—assistance that involves the transfer of lethal aid. An ongoing humanitarian tragedy is occurring in Syria and Iran is actively helping that tragedy unfold. The United States can successfully condemn the Iranian regime in the court of world opinion by pointing out that Iran is allowing Syria to descend into chaos, and harming regional stability in the process. Just as human rights violations within Iran make the Iranian regime a pariah, Iran’s efforts to undermine regional stability put it out of step with the international community and make it easier for the United States to form an international coalition that can work to coerce Iran to change its behavior.