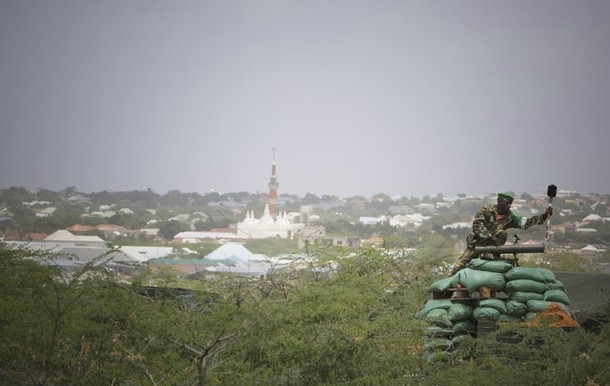 While billions of people around the world join in Christmas celebrations this weekend, there will be few outward signs of holiday cheer, religious or otherwise, in the onetime Somali capital of Mogadishu.

The last bishop of Mogadishu, the Italian Franciscan friar Pietro Salvatore Colombo, was gunned down during Mass in the city’s cathedral in 1989 just as the dictatorship of Muhammad Siyad Barre, the last entity that could plausibly claim to be a central government of Somalia, was beginning to crumble. The scene of the murder itself, a masterpiece of Norman Gothic revival modeled after the cathedral of Cefalù in Sicily, was sacked two years later during the chaos surrounding the regime’s final denouement. The last nun remaining in all of Somalia, Sister Leonella Sgorbati, was killed five years ago while caring for children in the only pediatric hospital still open in the entire country; her killers were militants belonging to al-Shabaab, the militant group linked with al-Qaeda. In 2008, the ruins of the pillaged Mogadishu cathedral were completely razed by the same extremists, seeking to erase all evidence of Christianity from what they hoped would be their new Islamist state.

Any Somali Christians who might be left keep a very low profile since nowadays even the president of the internationally-backed Transitional Federal Government (TFG) is an Islamist who, as The Economist has noted, “promotes a version of sharia law whereby every citizen of Somalia is born a Muslim and anyone who converts to another religion is guilty of apostasy, which is punishable by death.” In fact, except from a pair of somber services which will be conducted by military chaplains for the benefit of the Ugandan and Burundian troops who make up the African Union Mission in Somalia (AMISOM), there will be no formal observance of Christmas in Mogadishu this year.

The lack of festivities, however, does not mean that there is no reason for at least some rejoicing in this season. The year that is drawing to a close saw remarkable progress in the security situation in Mogadishu. After being long pinned down to a narrow strip of land at the city’s edge along the coast, AMISOM, strengthened by assistance from the United States, the European Union, and NATO as well as the United Nations Support Office for AMISOM (UNSOA), began a methodical push through Mogadishu in late 2010, establishing more than two dozen forward combat positions by the end of that year.

This year, the African Union forces began an offensive designed to cut off al-Shabaab’s access to the Bakara Market, the commercial heart of Mogadishu and, indeed, of most of southern and central Somalia. In heavy fighting AMISOM forced captured the former Ministry of Defense building, which the insurgents had been using as one of their main operational bases, as well as several other key edifices which control access routes to the market. At the same time, AMISOM commanders adapted their tactics to the necessity of fighting a counterinsurgency campaign in an urban setting, not only issuing rules of engagement that established no-fire zones for artillery and mortars within the city, but also limiting the use of indirect fire weapons in order to reduce harm to civilians.

More importantly, recognizing that insurgencies cannot be defeated by military means alone, the African Union force has made a concerted effort to win over the Somali public. The former commander of AMISOM, Major General Nathan Mugisha of Uganda, planned operations that had a heavy humanitarian component and, in fact, created safe havens that Somalis have flocked to, drawn by slowly improving security as well as access to medical care and clean water. In contrast, as I testified before the Senate Foreign Relations Committee this past summer, the policies pursued by al-Shabaab exacerbated the consequences of severe drought in areas controlled by the extremists to the point where it became a full-blown famine. Given the traditional hostility of Somalis to foreign interlopers of any kind, it was quite telling when I was in Mogadishu earlier this month to see children running alongside the armored personnel carriers in my convoy and waving cheerfully at my AMISOM escorts.

Of course the peacekeepers still face some serious challenges.

First, AMISOM is woefully understrength. While the arrival earlier this week of the first of some 900 soldiers from Djibouti is a welcome addition to the nearly 10,000 Ugandans and Burundians, the force is still short of the 12,000 peacekeepers authorized by the United Nations Security Council. Moreover, as I argued in testimony before the House Africa Subcommittee earlier this year, it is beyond delusional to think that a force that size could succeed where the infinitely more robust and better trained and armed UNITAF and UNOSOM II forces, with their 37,000 and 28,000 personnel respectively, failed so miserably just a decade and a half ago against a far less capable opposition than the current Islamist insurgents. Without significant beefing up, the territory secured by the peacekeepers will not increase much beyond what they currently hold, which is somewhat less than the entirety of Mogadishu itself.

Second, AMISOM has no air capabilities, not even helicopters to evacuate soldiers wounded in combat.

Third, the force has no maritime capabilities. As the current force commander, Major General Fred Mugisha, told me, even when the peacekeepers receive actionable intelligence that, for example, al-Shabaab is about to receive a shipment of arms or even foreign fighters from abroad—both have a history of coming by sea from al-Qaeda in the Arabian Peninsula and other such groups in nearby Yemen—they have no means to intercept or otherwise interdict the deadly flow.

While al-Shabaab has been weakened by a combination of the famine and its own ineptitude as well as the efforts of AMISOM, it is still too soon to count it out. As heavy fighting in Mogadishu’s Dayniile district earlier this week underscored, the group is still capable of going on the offensive. Moreover, there is evidence that it has increased, rather than lessened, its ties to foreign extremist networks. And it is increasingly shifting to vehicle borne improvised explosive devices (VBIEDs) and other asymmetric tactics, as I had an opportunity to see during my recent visit to Somalia.

In the end, as I argued in a study for the current issue of the Journal of the Middle East and Africa, the biggest challenge confronting AMISOM and, indeed, the international community, is not military, but political. There has yet to be any evidence that the bickering politicians of the Somali TFG have any inclination to even begin rising to the occasion.

On Wednesday of this week, members of the country’s parliament, who have been squabbling over the attempt by one faction to dismiss the speaker of the legislature, wrestled with and threw chairs at each other with such force that they literally drew blood. Meanwhile the TFG cabinet is led by a Harvard-educated academic so out of touch with reality that last week—at the very moment when the UN was launching a campaign to raise $1.5 billion to feed his starving countrymen—he gave an interview to The Telegraph in which he denied there was even a famine. Despite receiving copious amounts of Western aid for precisely this purpose, Abdiweli Mohammed Ali has not paid some of its military and police personnel for months, with result being many whom I encountered have quit their units and hired themselves out—in full uniform—as security officers or even fighters in private militias.

With “leaders” like these as local partners, it is a wonder that the peacekeepers have managed to make any progress: many a counterinsurgency campaign has gone awry by being shackled to far less self-destructive regimes. That the African Union forces have accomplished what they have this year and thus opened up, however briefly, a window of hope, however narrow, for the people of Mogadishu is itself a remarkable achievement worth celebrating in this festal season even if there is still precious little “good will towards men”—to say nothing of “peace on earth”—to be found in poor Mogadishu.