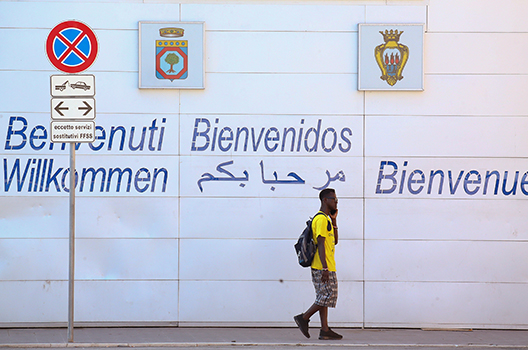 A few miles from NATO’s headquarters in Brussels last summer, four-year-old Mohammed from northern Iraq cheered for Belgium during the World Cup soccer semifinal against France. Every time a Belgian player got close to the goal, Mohammed excitedly waved the Belgian flag. Sixty days before, his two-year-old sister, Mawda, was shot dead by Belgian forces as his family, along with other refugees, tried to cross over to France. Now, finally granted asylum in Belgium after the tragedy, Mohammed is growing up as a Belgian.

With the defeat of the Islamic State (ISIS) other Iraqi children will hopefully no longer have to undertake the treacherous journey Mohammed and his family were forced to make. Since ISIS’ defeat in Iraq in 2017 and in Syria this year, the flow of migrants from the Middle East slowed. According to the International Organization for Migration (IOM), 4.1 million refugees (of a total of nearly six million displaced Iraqis) had, in fact, returned to Iraq as of October 2018.

NATO is an integral part of the Global Coalition to Defeat ISIS. “ISIS does not control any territory anymore, and that is, of course, very much because of the efforts of the global coalition and that’s a huge achievement, a significant achievement,” NATO Secretary General Jens Stoltenberg said at a press conference in Brussels on April 1, 2019.

NATO was established in 1949, after World War II, to serve as an insurance against global devastation and to oppose both militant nationalism and national militarism. It’s role and relevance has only expanded over the years.

As people continue to flee conflicts and look for new places to settle, as host countries grapple to accommodate a massive influx of refugees, and new conflicts erupt over strained resources, NATO’s role has evolved from ensuring state security to assuring the security of people. Toward this end, the important role that the Alliance plays in preventing statelessness and building stability in crisis-prone areas makes a strong NATO all the more necessary and pertinent today.

Not Just a Cold War Alliance

The world today is facing an unprecedented migrant crisis with 68.5 million forcibly displaced people worldwide, of which 25.4 million are refugees, according to the UN Refugee Agency. NATO has operations in many of the countries from which people are fleeing conflict, civil war, and unrest. NATO’s presence is crucial to restoring stability to these regions and strengthening governance.

NATO has played a critical role in the past. In Sudan, for example, when pro-government Arab militia carried out ethnic cleansing of non-Arabs forcing thousands to flee, NATO helped the African Union (AU) expand its peacekeeping and humanitarian mission by coordinating the airlift of more than 30,000 AU troops into the region between June 2005 and December 2007.

NATO has also stepped up in the aftermath of natural disasters. In October 2005, when a 7.6-magnitude earthquake struck Pakistan killing more than 80,000 people and leaving four million homeless, NATO brought in tons of food and relief supplies and airlifted medical units and engineers into the region.

One of the Alliance’s most significant, challenging, and longest missions has been in Afghanistan. Over the past eighteen years, NATO missions in Afghanistan have provided security, helped build the capacity of Afghan troops, and contributed to reconstruction and development work. NATO’s International Security Assistance Force (ISAF) mission in Afghanistan had at its height 130,000 troops from fifty partner nations. ISAF ended in 2014 when Afghan forces stepped up to take responsibility for security in the country. It was followed by Resolute Support Mission (RSM), which provides training, advice, and assistance to Afghan security forces.

Over the last few decades, conflict has forced millions of Afghans to flee. Yet those numbers could have been much higher had it not been for NATO’s peacekeeping and rebuilding efforts in Afghanistan.

US President Donald J. Trump has said he wants to reduce the US troop presence in Afghanistan. Such a move would create insecurity and cause many more Afghans to flee their country. There are currently 2.5 million registered Afghan refugees in the world. More than 115,000 Afghans have been internally displaced in the last year alone. What’s worse is that under the current EU asylum policy, Syrian refugees are given priority over Afghans. This means Afghan refugees are discriminated against when it comes to housing, medical facilities, compensation, and even their asylum approvals. As a result, many Afghans have been deported back to a country they struggled to escape.

Expansion Not Retreat the Way Ahead

In 2018, Trump threatened to withdraw the United States from NATO if US allies did not meet their commitment to spend 2 percent of their gross domestic product on defense. On a more positive note, Trump’s offer to make Brazil a major non-NATO “ally” is a reasonable step. NATO partners (such as Australia and New Zealand) enhance cooperation with the Alliance in areas of mutual interest, including emerging security challenges, but they are not obliged to participate in military operations. Colombia became the first Latin American country to become a NATO global partner in 2017. A partnership with Brazil and other Latin American countries could spur a combined international effort to combat organized crime and drug cartels in the region that have led to the death of thousands and forced many to flee out of fear.

A NATO partnership in Latin America with regional actors such as Brazil and Colombia can also create inroads for aid and humanitarian work to help Venezuelans who are in dire need. This could reduce the exodus of people from Venezuela who are desperate for food, water, and medicines and alleviate the burden on the region. The number of refugees and migrants from Venezuela currently stands at 3.4 million, according to the UN High Commissioner for Refugees and the International Organization for Migration. As much as 80 percent of this number are hosted in Latin American and Caribbean countries.

New investments in NATO that focus on rebuilding broken states and stabilizing conflict areas, modelled on NATO’s current peacekeeping and capacity-building missions in places like Kosovo and Iraq, is certainly a better approach to reducing the influx of refugees and migrants instead of inhumane measures of detention, deportation, and family separations.

Whether it is terrorists in Afghanistan or drug cartels in Latin America, NATO’s ability to adapt to new emergencies in different geographies only proves that an international allied effort is needed now as much, if not more than ever. Because if anything, the tragedy of the 1998 Kosovo war followed by the NATO bombings should serve as a reminder of the magnitude of humanitarian disaster that a delayed allied operation can lead to.

Priyali Sur is a development specialist, writer and filmmaker focusing on refugee rights and gender issues. She is also the founder of The Azadi Project that provides livelihoods to refugee women at camps and shelters through digital skills training. She was a 2017 Millennium Leadership Fellow with the Atlantic Council. Follow her on Twitter @priyalisur.