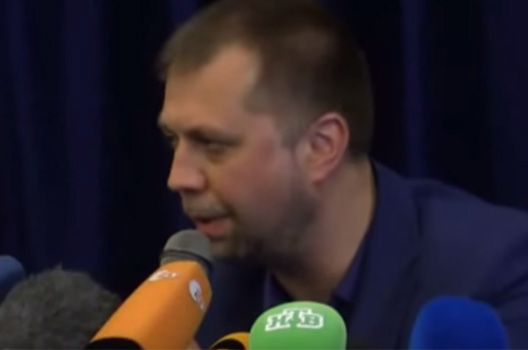 As leaders of the secessionist uprising in Ukraine’s Donetsk province go public this month, they turn out to be from Moscow, not Donetsk. Alexander Borodai, named last week as the “prime minister” of the Donetsk People’s Republic, is not only Muscovite, he’s been famous for years at the extreme-right fringe of Russian politics. He has argued publicly that Russia must dismantle Ukraine and absorb its people to boost Russia’s stagnant population en route to restoring a Russian Orthodox empire over as much as a sixth of the world.

So for Borodai, it is inconsequential that he is an outsider helping to foment insurgencies in Crimea and eastern Ukraine. He happily confirmed to reporters at a press conference last week his Russian citizenship, Moscow home address and Russianizing mission. He’s a “political consultant” who specializes in “resolving” ethnic conflicts, he explained, and his most recent assignment was to help in Russia’s seizure of power in Crimea.

“When I finished the work in Crimea I automatically … came here to work in southeast Ukraine,” Borodai said, according to Agence France-Presse. He plans to stay in Donetsk, he said, “for as long as is necessary.”

“To use the language of business, this has all been a non-stop project for me,” Borodai said, according to the Donetsk news website Ostrov. And the team with which he worked in Crimea and Donetsk “is, in general, one cohort of people.” Borodai confirmed that he worked in Crimea alongside Igor Girkin, the Russian army colonel who has been leading the secessionists’ armed militias. Girkin also turned out recently to live in Moscow.

The Russian financial daily Vedomosti and Ukrainian news media have said Borodai has connections to Russia’s Federal Security Service (or FSB, formerly the KGB), something Borodai has denied – at least sometimes. Asked at the May 17 press conference if he had connections to Russian intelligence or the Kremlin, Borodai replied, “Do you understand what sort of a question you’re posing? Even if there were [a connection], do you think I’d answer?”

The connection that fuels Borodai, and Girkin, may be with a Russian nationalist billionaire named Konstantin Malofeev, according to reports this week by Vedomosti, news website Slon and other Russian media. Borodai has worked for a Malofeev investment firm called Marshall Capital, Vedomosti reported May 19. Girkin is known to be an enthusiast of re-enacting historic military battles in Tsarist period costumes — an activity that he shares with Malofeev, according to Oleg Kashin, the author of the Slon article.

Is Malofeev the conduit providing the money to run the Donetsk secessionist campaign? That is the allegation of Russian anti-corruption campaigner and lawyer Alexei Navalny.

Malofeev, who also lives in Moscow, is a religious man, “one of several prominent Orthodox business and political leaders who are enjoying increasing influence” under Putin, the Financial Times reported in September. Malofeev was under pressure from Russian authorities who raided his offices and home in 2012 as part of what they said was an investment fraud case. But Malofeev’s relations with the government seemed to have improved last year, the Financial Times said.

Borodai shares with Malofeev a commitment to the greatness of Russia – and presses for its once-imperial restoration. For years, Borodai edited Zavtra, Russia’s most extreme right-wing newspaper, and since 1996 has written 156 articles for the paper, extolling the virtues of tsarism, Russian superiority and orthodoxy. Borodai also has been a frequent commentator on Den’ (“Day”) TV, a channel that espouses an expansion of Russia to its former imperial borders to rule a sixth of the world’s territory and lead a bloc of Orthodox nations.

In a nearly fourteen-minute Den’ video from February 21, entitled “How to divide Ukraine,” Borodai explains that Ukraine is alienated from Russia largely by elite Ukrainian business oligarchs who pursue their own interests rather than Russian greatness. Russia, having lost 5 million people since 1991, must slowly absorb Ukraine and its 50 million people, who are “similar to us in mentality” and can help Moscow build a greater Russia, he says.

And so back to that question at the press conference: Just who is paying his per diem as he pursues this project these days? “I am a Russian citizen,” he told the reporters, “but I am a private individual so you cannot accuse the Russian government of having a hand in what’s going on in the Donetsk People’s Republic because of my presence here.”

Image: Aleksandr Borodai, a Russian nationalist militant from Moscow, speaks to reporters last week as the "prime minister" of the secessionist republic he wants to establish in Ukraine's Donetsk province.