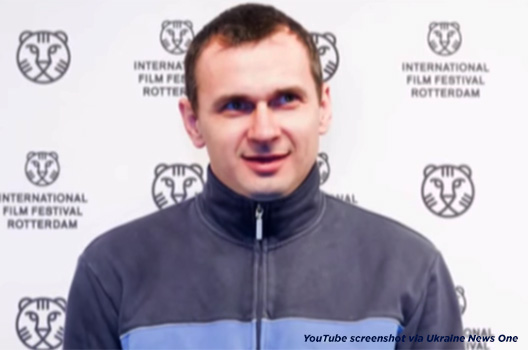 Ukrainian film director Oleg Sentsov, a native of Crimea, won wide acclaim a couple of years back with a sensitive docu-drama about a teenager caught between his success in the virtual world of video games and his struggle in the real world around him. The film was featured in film festivals in Rotterdam, Wiesbaden and Odessa.

When Russian troops began occupying Crimea at the end of February, Sentsov, a 38-year-old single father of two, stood up publicly for Ukraine. He carried food to Ukrainian soldiers besieged within their bases by Russian troops and organized convoys of cars, flying Ukrainian flags, to protest Russia’s takeover.

On the night of May 11, Russian security officers went to his apartment in the Crimean capital, Simferopol. They arrested him and Russia now says that Sentsov is a neo-fascist extremist who was plotting with three other men to blow up Russian offices, power and rail lines, and historic monuments. The Russian government is holding Sentsov at Moscow’s Lefortovo Prison, the former KGB prison whose inmates have included Aleksandr Solzhenitsyn and Natan Sharansky.

While Sentsov has not been officially charged with any crime, Russia’s state-controlled media have developed the accusations against him.  On May 30, two television stations, Channel One (Perviy Kanal) and Life News, broadcast news segments citing Russia’s Federal Security Service (FSB) that presented Sentsov as the mastermind and organizer of a series of bomb attacks that were plotted by a Ukrainian far-right-wing group, Right Sector (Praviy Sektor). The reports used dramatic images and video of an alleged collaborator of Sentsov being arrested with explosives in a backpack. (The stations do not say whether FSB supplied the images, which identical, to both channels.)

Sentsov’s lawyer, Dmitry Dinze, and Sentsov’s supporters, say his arrest is clearly political – that a pro-democratic filmmaker was not secretly a neo-fascist bomber. Aside from Dinze and a representative of Russia’s Public Oversight Commission, a state body overseeing rights of incarcerated detainees, no one has been allowed to see him. Dinze (who was the defense lawyer in the trial of the feminist, anti-Putin, punk rock group Pussy Riot) said he is required after each of his visits to Sentsov to sign a document promising not to discuss the case with anyone. Doing so would give Russian authorities the right to remove him from the case.

Dinze has told the Russian news website RBK that Russian officers mistreated Sentsov after arresting him in Simferopol: “They put a plastic bag over his head to smother him to the point on unconsciousness, they threatened to rape him and kill him – and during all this, forcing him to admit that he organized explosions, planned to set buildings on fire, kept weapons and explosives.”

Since then, Dinze says, he has seen signs of physical abuse on his client’s body. A representative of the Public Oversight Commission has denied that any of the detainees had been physically harmed.

Members of the European Film Academy, chaired by Polish director Agnieszka Holland, have written to President Vladimir Putin and other Russian officials, asking them “to ensure the safety of Oleg Sentsov; to make public the whereabouts of the detained; to have the detained charged with a recognisable offence or released; to instigate a full, prompt and impartial investigation into the apparently arbitrary detention by the FSB in order to bring all those responsible to justice.” Filmmakers such as Spain’s Pedro Almodovar, Germany’s Wim Wenders, British directors Stephen Daldry and Mike Leigh are among the signatories of the open letter.

The Academy has not received a response.

Human rights activist Oleksandra Dvoretska, in an interview said that Sentsov’s sensitivity to injustice and his inclination to speak up fueled his pro-Ukrainian demonstrations. “He could not just live quietly in a Russian Crimea,” she said “but he is not a violent person and these accusations of terrorism are just ridiculous, this is not something that he would ever resort to.”

After more than a month in Russian detention, Sentsov’s state of health, and the conditions of his confinement are little known. Russia has refused to let Ukrainian consular officials visit him, a violation not only of Sentsov’s human rights but of consular norms, said Ukraine’s Foreign Ministry has said.

Sentsov’s case is reminiscent of several cases related to Chechnya, where activists were arrested, charged with terrorism, convicted in closed-door trials after prosecutors reported that they had signed admissions of guilt, and then sent off to serve prison terms. Several Chechen nationals, accused of plotting an assassination attempt against the Kremlin-appointed leader of Chechnya, Ramzan Kadyrov, were imprisoned in this manner in May 2008.

Crimea is changing, says Volodymyr Prytula, a Ukrainian journalist with Radio Liberty based in Simferopol. An atmosphere of fear and menace is in the air, it is widely believed that thousands of FSB officers have arrived on the peninsula. Their job, he says, is eradicate dissent and enforce the Russian order. Sentsov was one of the first to fall victim to that enforcement. Many are bound to follow, Prytula said in a phone interview. A sign of the influx of Russian security personnel is that “the beaches in Crimea are empty, yet all the hotels are full,” he said. “There’s a very concerted campaign underway to scare and cow everyone into silence and obedience. Many people have been arrested, others have been threatened and harassed. Anything remotely pro-Ukrainian is in danger.”