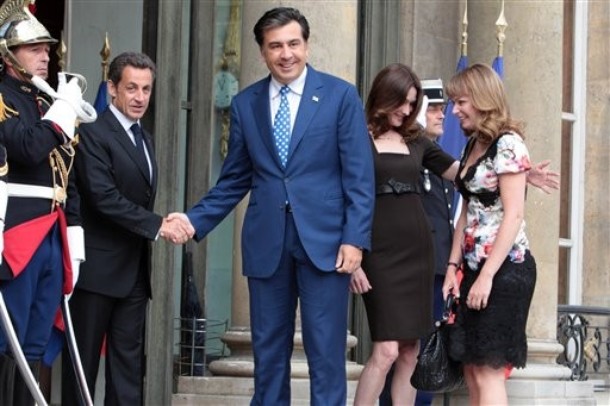 As if driven to Georgia by Zephyrus, ancient god of the westerly wind, US Secretary of State Hillary Clinton, French Foreign Minister Bernard Kouchner and European Union High Representative Catherine Ashton arrived here in the turn of two weeks.  Their visits and encouraging words indicate that a new westerly wind is blowing. Before long, we shall see whether it is a true Zephyr—that gentle, fecund wind known to the ancients—or just a light and changeable summer breeze.

“The US is steadfast in its commitment to Georgia’s sovereignty and territorial integrity,” Clinton said, referring several times to Russian invasion and occupation of Georgian territories.  “The US does not recognize spheres of influence.”

Washington has not abandoned its policy of “resetting” US-Russian relations.  Rather, Clinton averred, “We can walk and chew gum at the same time.”

Kouchner’s message matched Clinton’s.  “France,” he said, “has not forgotten the commitments it has undertaken, in particular the Medvedev-Sarkozy agreement…Russia must leave the territory of Georgia and France must apply maximum strength to achieve it.”

It will take time, Kouchner stressed.  “We try to achieve success in the framework of Geneva discussions and we try to talk as much as possible with Russia.”

Likewise, Ashton emphasized the importance of talks with Russia, but she also launched discussions on an EU-Georgia Association Agreement that will be, she said, “a foundation to bring Georgia closer to the European Union.”  The EU Association agreement will establish a framework for cooperation on political matters, trade, justice, democratic development and security.

The European foreign policy chief also joined the European Union Monitoring Mission (EUMM) in Odzisi, the last Georgian-controlled village on the road to Akhalgori, which lies just east of South Ossetia.  Like EUMM officers, she was able only to peer through binoculars at Russian-occupied territory.  Later, she visited the refugee village of Tserovani, affording her a look at the human side of Russia’s invasion and subsequent ethnic cleansing.

The westerly wind has shifted, but why?

Internationally, NATO’s need for supply routes to Afghanistan that bypass Pakistan has rekindled interest in the South Caucasus East-West Corridor.  Georgia’s port of Poti and the railroad to Baku have become western strategic assets.

This contributes to the perceived safety of the East-West Corridor, which has led to renewed interest in big energy projects such as the Nabucco natural gas pipeline and the Azerbaijan-Georgia-Romania Interconnector liquid natural gas train.

Of course, if the west were entirely confident in Russia’s professed common interest with NATO in Afghanistan, or in Russia as a reliable energy supplier, these Georgian projects would be less attractive.  But, though they will not soon admit it, western countries are beginning to shed their illusions about Russia.

In contrast, Georgia is looking better.  In particular, the cathartic effect of the May 30 local elections cannot be overstated.  Commenting on the first democratic contest since the August 2008 invasion, a joint OSCE and Council of Europe statement said, “Municipal elections in Georgia marked evident progress towards meeting international standards.”  Naturally, the groups noted that “significant shortcomings remain,” however, they also praised election authorities for their preparations and their efforts to handle problems that arose on election day.

More important, the Georgian people demonstrated that politics has migrated from the streets to the Parliament and the polls.

Georgia still has plenty to do—but so does the west.  To continue Clinton’s metaphor, the test of the west’s ability to “walk and chew gum at the same time” will come when Moscow objects to and hinders the effort.
If the new westerly wind is fecund and sustained, the EU-Georgia Association Agreement negotiations will progress smartly.  The European Parliament will quickly ratify the June 17 visa facilitation agreement.  America and Georgia will proceed apace on a free trade agreement and a US visa facilitation agreement similar to that with the EU will be concluded.

Having lent political support to Georgia’s Action Plan for Engagement, the EU and the US must now provide political, financial and technical support to realize its seven instruments.

Finally, it is time for the west to lift its unacknowledged arms embargo on Georgia.  Georgia must acquire the equipment it needs to sustain its sizeable commitment to the war in Afghanistan.  Moreover, Georgia must acquire the equipment and associated training that it needs for its legitimate self-defense.  Some may wince, but self-defense is a right inherent in the Georgian sovereignty that the west so earnestly proclaims.

As summer turns to autumn, these will be some of the indicators of whether we felt a true Zephyr back in early July or just a variable summer breeze, easily overtaken by the cold wind of Boreas, ancient god of the north wind.