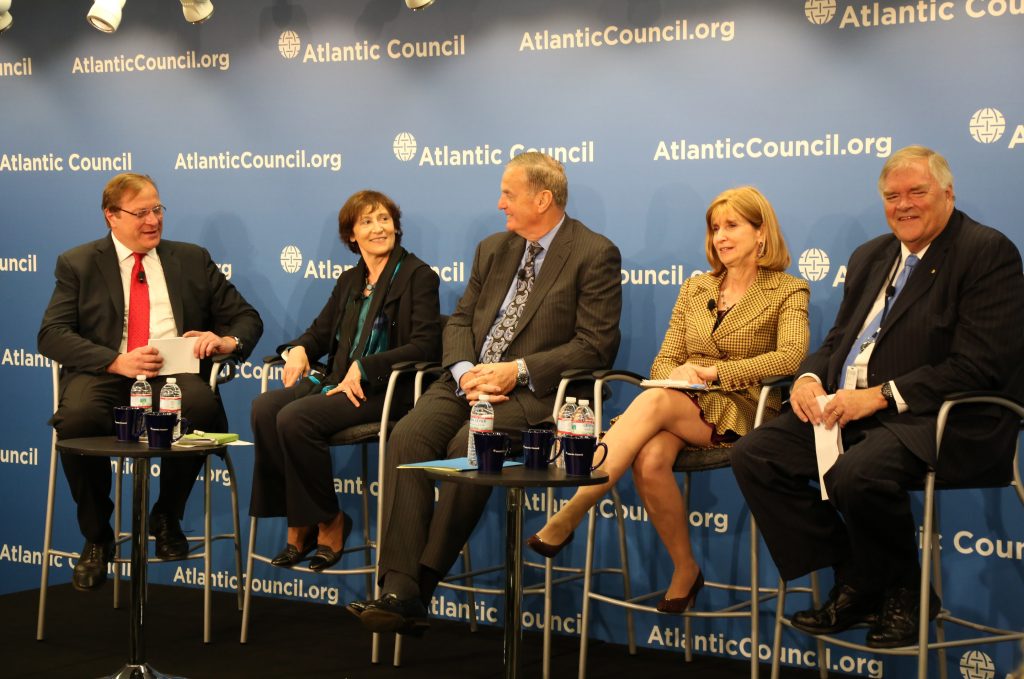 “If we do not do this … the world wouldn’t stay the same,” said Caroline Atkinson, Deputy National Security Advisor for International Economic Affairs at the White House.

Noting that 95 percent of the world’s consumers are outside the United States, she added: “They’re going to go on doing their consuming and trade without the rules and standards and norms that we have based on our values. But if we’re there helping to set the level playing field, then we are showing leadership.”

The Obama administration has launched a full-court press to win support in Congress for Trade Promotion Authority (TPA). This fast-track legislation is key to negotiating two important free-trade agreements: the Trans-Pacific Partnership (TPP), which includes the United States and 11 other countries, and the Transatlantic Trade and Investment Partnership (TTIP), which links the United States and the 28-member European Union.

TPA would allow the President to submit trade deals to Congress for up-or-down votes without amendments. The White House effort received a shot in the arm April 22 when the Senate Finance Committee in a 20-6 vote passed a bill to renew TPA.

The full Senate will debate the legislation next week. There, it faces stiff opposition mostly from Democrats, including Obama ally and Senate Minority Leader Harry Reid (D-NV).

“This is the time to move,” Atkinson said in her remarks as part of a panel hosted by the Atlantic Council’s Global Business and Economics Program. “This is a tremendous window of opportunity.”

US President Barack Obama is personally invested in pushing his trade agenda. Atkinson said he’s been “very clear arguing why this is a good deal for America.”

Paula J. Dobriansky, former Under Secretary of State for Democracy and Global Affairs, acknowledged the difficulties of pushing through trade agreements, but said it is doable.

The effort requires patience, a good executive-legislative relationship, and involvement of the NGO and business community, said Dobrianksy, a Senior Fellow at Harvard’s Belfer Center for Sciences and International Affairs.

Meanwhile, US and EU officials are in their ninth round of negotiations on TTIP in New York this week and US Trade Representative Michael Froman traveled to Japan over the weekend to discuss TPP.

TPP will provide not just market access but an opportunity to spread US values and standards on labor rights, the environment, and the protection of intellectual property, Atkinson said.

One prominent TPP critic—Sen. Elizabeth Warren (D-MA)—says the accord would benefit big businesses and hurt US workers. Obama says Warren is wrong.

Atkinson acknowledged concerns about globalization and stagnant wages as being “very real,” but said this was partly why Washington must take the lead in ensuring a level playing field on global trade.

“This is your one chance to get into other folks’ situation as they are into yours. And it is the only chance really,” said Beazley, whose country has FTAs with both the United States and China.

“If this falls apart, it doesn’t mean trade agreements will go away… It will re-emerge, probably about four or five years from now, on the initiative of the Chinese and their idea of a free-trade agreement for the Asia-Pacific region,” he added.

Beazley said the TPP was not directed against China, which has been excluded from TPP talks.

“This is not ganging up on the Chinese, this is putting in place something that makes a difference,” he said.

Panelists at the discussion, moderated by Atlantic Council President and CEO Frederick Kempe, emphasized the link between trade and national security.

“Trade and one’s economic standing is so integral and interwoven with one’s military standing,” said Dobriansky, an Atlantic Council board member. She added that bolstering economies will generate resources to invest in national security, and will also help build greater domestic consensus on foreign policy.

Dobriansky acknowledged that there are “direct connections” between TTIP and strengthening NATO. “With regard to NATO, one of the mandates is we want to see greater burden sharing and toward that end, if you bolster economies you are going to have resources to be devoted in the national security area” that could strengthen ties within the alliance, she said.

The United States has an opportunity to work with its friends and allies to “adopt a spirit of conflict prevention,” said Jones, a former National Security Advisor to Obama. “If you get to that point, the investments that you make will be a lot cheaper and you will really strike a blow against radicalism.”

The Obama administration, which was initially cool to China’s proposed Asian Investment Infrastructure Bank (AIIB), has in recent weeks warmed to the idea as its allies, including Britain, have rushed to join the bank. The United States has not joined AIIB.

Christine Lagarde, Managing Director of the International Monetary Fund, came out in strong support of the AIIB in an April 9 address at the Atlantic Council.

And Beazley said: “When there are rising powers on the globe you have to make way for them and see what they have to offer.”

“We need a decent discourse with the Chinese, and if the Americans are in it the chances are it will be a much better discourse than otherwise,” he added.