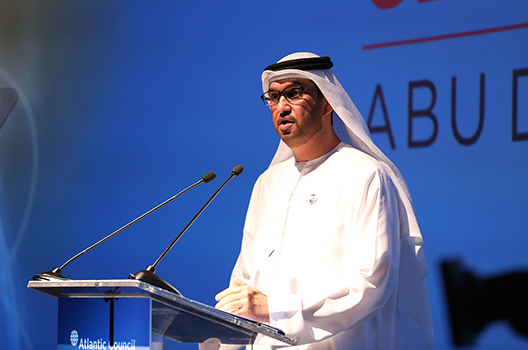 “These two offshore blocks, covering 8,000 square kilometers, represent the beginning of a new wave of exploration that will leverage our resources and further enhance Abu Dhabi’s position as an essential energy provider to the world,” Al Jaber said.

Al Jaber made the announcement in the opening session of the Atlantic Council’s 2019 Global Energy Forum in Abu Dhabi, which brings energy leaders together to set the global energy agenda for the year and anticipate and respond to dramatic changes in the world of energy.

According to Al Jaber, the decision to open the new offshore blocs was part of ADNOC’s “Oil and Gas 4.0” strategy, which aims to use innovative technologies and international partnerships to position the UAE as a key energy exporter. “As we prepare to cater for the world’s future energy needs, we are reinventing our approach to partnership,” Al Jaber said. “We are engaging strategic partners. Partners who will actually put skin in the game—bring new technologies and open up new growth market opportunities for ADNOC,” such as Eni and PTTEP.

“By embracing rather than resisting disruptive innovation,” Al Jaber said, “we will be a leader not a follower, more able to withstand unpredictable market headwinds and be a reliable partner for long term sustainable growth.”

Suhail Al Mazrouel, the UAE’s minister of energy and industry, hailed ADNOC’s success and explained that the UAE’s regulators “are convinced in the end to let the private sector lead in giving solutions and making energy more reliable, [while] we will focus more on the environmental side and making sure that the old forms of energy in the future are cleaner.”

The UAE’s commitment to international partnership and embrace of new innovation means that it was a natural fit for the Atlantic Council’s Global Energy Forum, Atlantic Council President and CEO Frederick Kempe said. “There is no better place in the world for this conversation than Abu Dhabi,” Kempe explained. “It lies at the crossroads of so many key energy trends, trade flows, and technologies. There are indeed few places that have such a balanced foundation in the energy sources that have dominated the 20th century and the new energy sources that will come to dominate the 21st century… there are few places in the world with such a far-sighted commitment to driving innovation across all of these energy sources.”

Atlantic Council Executive Chairman Emeritus retired Marine Corps Gen. James L. Jones, Jr. also highlighted the importance energy innovation is playing both for energy markets and for geopolitics. “Energy, just like the world of defense and security, is increasingly leveraging new technologies, including artificial intelligence, big data, block chain, 5G, and beyond and these technologies are not just unlocking new opportunities for producers and consumers, but also play a tremendous role in the global fight against climate change,” Jones said.

Jones read out a message from US Deputy Secretary of Energy Dan Brouillette, who highlighted the importance innovation has played in dramatic shifts in US energy supplies in recent years. “After a long battle in the US between regulation and innovation, innovation finally prevailed,” Brouillette’s message read. “Innovation has spurred a technology revolution leading to astonishing progress due to a cascade of technological breakthroughs. The United States [now] uses energy more cleanly and more efficiently, obtains it from a wider range of sources, and produces it in more affordably and in greater abundance than anyone predicted.”

But former US Secretary of Energy and President and CEO of the Energy Futures Initiative Ernest Moniz said he still thinks many energy companies and energy producing countries have much to do to truly embrace the promise of new technologies. “I think we are still slow on the uptake and are barely scratching the surface,” Moniz said. “What we term platform technologies—that is, not energy technology specifically, but big-data technologies and AI, 3D printing, and all of those technologies that are racing ahead—we need to get on top of in terms of being able to help our supply chains and our energy businesses moving forward.”

The ability of energy producers to quickly embrace new technologies will be especially critical to helping address the growing threat of climate change, according to Moniz. “Innovation in technology, in policy, and in business models is absolutely critical and we need a large dose of humility in thinking about the pathways to low carbon after five or ten years because there are so many factors, political as well as technological, that our focus should be flexibility and optionality for all of us to meet a low-carbon goal in the best way that we can,” Moniz said.

Brouillette detailed how the United States plans to utilize its new energy abundance to affect change in the global energy landscape. “By exporting its energy, the United States is using its abundant supply as a tool of liberation, not subjugation,” Brouillette wrote. In an apparent rebuke of Russia and China’s use of energy politics to gain influence in neighboring countries, Brouillette said the United States is “liberating allies from dependence on any nation that wields its energy supply as a political weapon. We believe all nations have the right to chart their own energy future and achieve energy security without being held financially hostage by other countries. And across the globe, the US is promoting energy security among its friends, working with them to repel the malign influence of those seeking to undermine free markets and energy independence.”

Moniz agreed that “energy security is not an individual country’s field of play; it is a collective responsibility because the insecurity of allies and friends in the energy arena affects. . . our foreign policy in very, very strong ways.”

Kempe hoped that the Global Energy Forum could help provide the international cooperation and engagement needed to protect and cultivate a stable global energy market, which he argued will be key to protecting “a global order that is inclusive, prosperous and peaceful at time when so many forces are pulling in the opposite direction.”