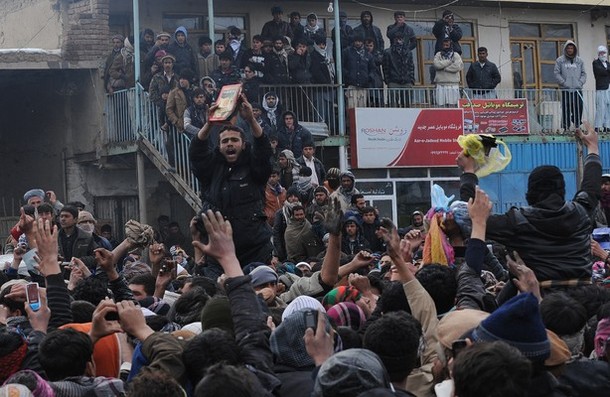 At least nine people have been killed and dozens wounded so far in a series of riots across Afghanistan reacting to news that some Islamic religious materials were burned along with the trash by American troops. President Obama this morning added his “deep regret” and “sincere apologies” to a long list by other US and NATO officials. He added that he would “hold accountable those responsible.”

General John Allen, the commander of the NATO mission in Afghanistan, had almost immediately after the incident issued a statement offering “the noble people of Afghanistan”  his “sincere apologies for any offense this may have caused.”

Yet, despite this groveling, three days of rioting have ensued. And experts worry that things will only get worse, as some members of parliament have declared “jihad against Americans is an obligation” and many expect that conservative mullahs will issue similar calls at Friday prayer.

Martine van Bijlert, director of the Afghanistan Analysts Network, explains that, “The demonstrations are a combination of religious outrage, pent-up frustration, and groups wanting to stir trouble. It is difficult to predict how bad things will get; this will depend largely on who manages to control – or hijack – the expressions of anger.”

While applauding the swiftness of contrition in statements by Allen and others, she warns “they are unlikely to placate those who were determined from the outset to make as much noise as possible, or those who feel they have already heard so many apologies in the past.” She also notes “the bewilderment felt by many Afghans (and foreigners) that after ten years of efforts in Afghanistan there was apparently still no understanding of how inflammatory mistakes like that are.”

Under the circumstances, apologies and other attempts by Western leaders to ameliorate the anger are absolutely appropriate. There’s no question that the burning of Islamic religious materials  is a blunder that undermines the decade-long mission.

At the same time, can we at least acknowledge that “those responsible” for this wave of murder and mayhem are the religious zealots and extremists stoking the outrage, not some American soldiers who made a mistake? That killing human beings is infinitely more outrageous than burning some pieces of bound paper?

Of course, this isn’t the first time since American troops have been in Afghanistan that violent protests have erupted over various perceived sleights to Islam and its prophet. Just last year, angry mobs murdered twelve innocents at the UN compound in Mazar-i-Sharif because a self-styled pastor burned a Koran  in Gainesville, Florida-some 8000 miles away. Back in 2005, seventeen people were killed in rioting over a report–later debunked–that American soldiers had flushed a Koran down a toilet at a  Guantanamo Bay, Cuba prison.  Afghanistan was also a principle site of protest in 2006-and subsequent flareups of the controversy-over the printing of some cartoons making sport of the Muslim prophet Muhammed in the Danish Jyllands-Posten and various other European newspapers.

From a public policy standpoint, then, NATO, the US Government, and other outsiders in Afghanistan are absolutely right to bend over backwards to avoid inflaming the sentiments which lead to destruction and loss of life.

At the same time, however, it’s reasonable to wonder what we have gotten out of more than a decade of investment-including 1901 US and 2901 total NATO Coalition deaths-in an effort to forge, as President Obama put it in hisspeech at West Point, a “partnership with Afghanistan grounded in mutual respect – to isolate those who destroy; to strengthen those who build; to hasten the day when our troops will leave; and to forge a lasting friendship in which America is your partner, and never your patron.”

Aside from hastening the day when our troops leave, none of those goals seem any closer than they were in 2001.

James Joyner is managing editor of the Atlantic Council