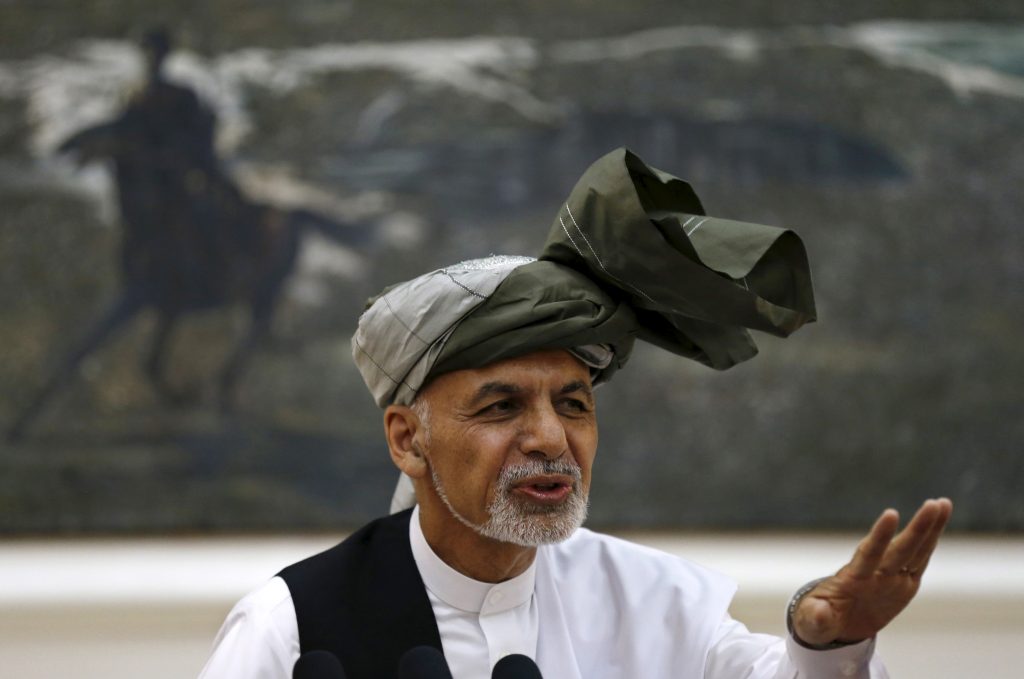 Afghan President Ashraf Ghani demanded Pakistan crack down on the Taliban after the militant group claimed responsibility for carrying out attacks in Kabul Aug. 10. "We hoped for peace, but war is declared against us from Pakistani territory; this in fact puts into a display a clear hostility against a neighboring country," he said. (Reuters/Mohammad Ismail)

Afghan President Ashraf Ghani is right, Pakistan can do more to disrupt terrorist networks that plan and carry out attacks across the border in Afghanistan, says Atlantic Council Senior Fellow James B. Cunningham.

A broad spectrum of terrorist and criminal groups—most notably the Taliban and the Haqqani Network—are based in safe havens in the mountainous tribal regions of Pakistan that abut Afghanistan. Opinions vary as to the degree of support these groups receive from the Pakistani state, particularly its military and intelligence service—the Inter-Services Intelligence (ISIS) agency.

“There is a great deal that Pakistani authorities can do to disrupt Taliban activities. They can limit their freedom of movement, and curtail their ability to plan and execute suicide bombings across the border in Afghanistan,” Cunningham, a Senior Fellow at the Atlantic Council and the Khalilzad Chair on Afghanistan, said in an interview.

Since coming to office in September of 2014, Ghani has invested considerable political capital in his outreach to Pakistan with the hope that Islamabad will use its leverage over the Taliban to make peace in Afghanistan.

That effort appeared to be in danger following deadly terrorist attacks in Kabul August 10.

Ghani lashed out at Pakistan accusing it of not doing enough to deal with the terrorists. “We hoped for peace, but war is declared against us from Pakistani territory; this in fact puts into a display a clear hostility against a neighboring country,” he said.

“We made it very clear to the Pakistani side that a new window of opportunity has opened and that it depends on the capacity and the will of the Pakistani leadership to change that window into a door and then to an alley and even a highway, or to shut it all together,” he said.

“We have waited this long for Pakistan to demonstrate its will through action. However, Pakistan still remains a venue and grounds for gatherings from which mercenaries send us messages of war,” he added.

The terrorist attacks were just the latest obstacle to the peace process.

In July, the Taliban confirmed reports that its reclusive one-eyed leader, Mullah Omar, had died. According to some reports, Omar had died in a hospital in Karachi, Pakistan, two years ago.

Confirmation of Omar’s death was followed by a messy succession that saw the elevation of Omar’s deputy, Mullah Akhtar Mohammad Mansour, to the leadership position. Not everyone was happy with the decision of the Taliban leadership council that is based in Quetta, Pakistan.

Senior commanders, including the influential Mullah Qayum Zakir, and Omar’s son walked out of a meeting of the council as Mansour’s appointment became clear.

Prospects for peace have been further complicated by the appointment of Sirajuddin Haqqani, the leader of another Pakistan-based terrorist network, as Mansour’s deputy. The Haqqani Network, which unlike the Afghan Taliban is designated a foreign terrorist organization by the United States, has been responsible for killing US soldiers in Afghanistan.

Could the Taliban’s new leaders be asserting themselves by ordering spectacular attacks in the Afghan capital?

“The only person who can answer that question is Mansour and they usually don’t explain their actions and certainly are not credible or truthful in doing so,” said Cunningham, who served as the US Ambassador to Afghanistan from August 2012 to December 2014.

James B. Cunningham spoke in an interview with the New Atlanticist’s Ashish Kumar Sen. Here are excerpts from our interview.

Q: What do the Taliban attacks in Kabul and President Ghani’s denunciation of Pakistan’s support for the terrorists mean for peace process?

Cunningham: First of all, these are horrible and despicable attacks. They are particularly brutal because the vast majority of those who have been killed or have been wounded are civilian bystanders—women and children, people waiting to go to work, people trying to get into the airport. It just goes to show how brutal and uncaring the Taliban are about their fellow Afghans and fellow Muslims.

Hardly any foreigners have been killed in these attacks. Unfortunately, one NATO soldier, an American, was killed in one of the attacks, but the attacks have all been directed against Afghans going about their normal business. That, obviously, doesn’t bode well for the peace process.

The real question is, why is this happening and does it have some planned impact, or is it basically a coincidence of timing? We don’t know the answer to that question.

President Ghani has invested quite a bit of his political capital in trying  a new way of dealing with the government in Islamabad. It is still to be seen whether that approach can bear fruit, but as somebody who spent three and a half years in the American Embassy in Kabul watching Taliban and Haqqani terrorists coming across the border with Pakistan to kill American soldiers and civilians, I have some sympathy for President Ghani’s view that Pakistan has a responsibility to promote peace and do everything it can to prevent the Taliban and Haqqani terrorists from arming and preparing themselves in Pakistan to kill people in Afghanistan.

Q: What level of control does Pakistan—the ISI and elements within the Pakistani military—have over the Taliban?

Cunningham: This gets discussed in Afghanistan all the time—“How much control do Pakistani authorities, the ISI, have over the Taliban?” Depending on whom you are speaking to the answer ranges from “complete control” to “no control.” That’s a question that cant really be answered with certainty, except that the answer is somewhere in the middle.

More certainly, without regard to the question of control, there is a great deal that Pakistani authorities can do to disrupt Taliban activities. They can limit their freedom of movement, and curtail their ability to plan and execute suicide bombings across the border in Afghanistan. Sometimes they have done that, but on a day-to-day basis there are clearly things that they can do to show that they are doing everything they can to make it much more difficult for the Taliban to conduct these terror activities.

The fact that Siraj Haqqani has now formally become deputy to Mullah Mansour raises a lot of questions about what the Haqqani operations are going to be like in the future, their relationship with the Taliban itself, and what that means for the continuation of terror attacks.

Q: What has Pakistan done to reign in these elements?

Cunningham: Pakistan is conducting a large counterterror operation in Waziristan, which is to be commended. They have adopted a very clear new line with regard to President Ghani, his government, and Afghanistan repeatedly affirming in public, including very recently, that Pakistan regards the enemies of Afghanistan as its own enemies and will deal with them. They have agreed that there should be no distinction between extremists on either side of the border.  Pakistan has also helped broker the recent first talks between the Afghan government and Taliban representatives, and that is important.  I hope they will continue to support talks if the possibility exists.

The conceptual framework has considerably improved, as has the expressed intent to act on that framework. But action has been uncertain at best. It is safe to say that Afghan observers are looking to see that besides rhetoric action is also taken.

The Afghan people, the Afghan government, and international observers need to see that Pakistan is doing what it can. There is a need to build confidence between Pakistanis and Afghans that they will work together, and with Americans and others, to deal effectively with terrorist operations emanating from Pakistan.

Q: In the attacks in Kabul do you see an attempt by the Taliban’s new leadership—led by Mullah Mansour—to assert its authority over the group?

Cunningham: There are a lot of hypotheses. The only person who can answer that question is Mansour and they usually don’t explain their actions and certainly are not credible or truthful in doing so.

You can conceive of a situation in which there is military conflict underway and negotiations are about ending that conflict. Hopefully at some early point you get to a situation where the killing stops and the focus is on the negotiations. It is impossible to defend the slaughter of innocent civilians.

Mansour  did say the Murree talks were authorized. That caused a lot of contention within the Taliban, but whatever their political problems, resorting to these kinds of attacks is not a way to achieving an opening for peace discussions. It does demonstrate the nature of the Taliban.

Q: Is there a disconnect between Taliban commanders on the field and the leadership in Quetta?

Cunningham: We know that there have been, and continue to be, differences and splits in the leadership and at least some of the on-the-ground commanders and foot soldiers. One of the things we have seen quite clearly is that a difference of opinion has developed over the past years between those who are inclined to realize that what they are doing on the ground is not going to succeed and they are interested in a political settlement,  and those who are inclined to continue this very, very unfortunate conflict. That tension will continue to exist if indeed there is a real component of the Taliban that has now decided that it wants to pursue peace discussions.

Q: Where is the greater support for peace—among the commanders on the ground or the leadership in Quetta?

Cunningham: It is split in all directions. Part of what has happened over the years is that a large part of the Taliban has become a criminal enterprise, as is the case with the Haqqani Network. There are some ideological and mistaken religious streams within the Taliban, but a large part of the operation has become dedicated to earning money. Within that constellation I am sure there are different views to what the relative merits to peace and conflict are.

Q: What can the Afghan government do at this stage to salvage the peace negotiations with the Taliban?

Cunningham: The only thing that they can do is to make clear that they are interested in opening further the door that was apparently opened in Murree while at the same time making clear to the Taliban that their will to withstand these kinds of attacks will remain intact and that the only way out of this for the Taliban is through peace talks.