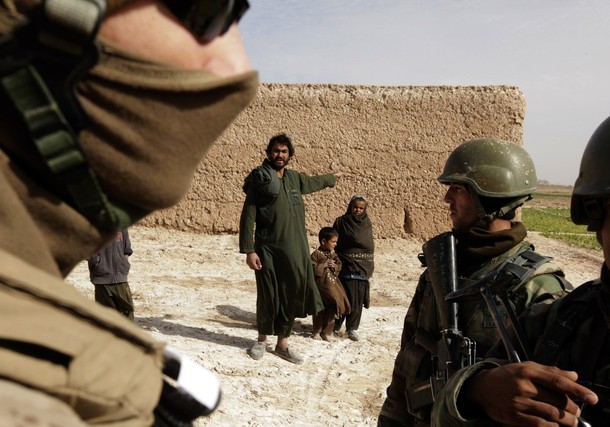 "The Endless Game" cartoon in the Financial Times showed U.S. President Barack Obama and a Taliban insurgent batting back and forth a coffin-shaped projectile over the smoking ruin of a building.

Another in the International Herald Tribune has U.S. Army Gen. Stanley McChrystal boarding a U.S. transport as an Afghan soldier waves goodbye. Atop a nearby mountain, one Taliban fighter says to another, "THE PULLOUT HAS BEGUN!"

The two newspapers are the world’s most read English-language dailies by government leaders, business executives and media throughout the world.

Perception is all too often reality. Add to the Afghan debacle syndrome that 31 out of 50 U.S. states are seen as insolvent. Some local governments are readying bankruptcy proceedings. State governments can only default; California is on the verge of taking up the option. State and local governments have unfunded retirement obligations of at least $2 trillion. But the United States still spends more on defense (Iraq and Afghanistan included) than the rest of the world put together.

Nobel Prize winner in economics Paul Krugman writes, "We are now, I fear, in the early stages of a third depression. It will probably look more like the Long Depression than the much more severe Great Depression. But the cost — to the world economy and, above all, to the millions of lives blighted by the absence of jobs — will nonetheless be immense."

Clearly, Obama has to show the country light at the end of the Afghan tunnel before November’s mid-term elections. Public opinion support has already dropped to less than 50 percent.

Joint Chiefs of Staff Chairman Adm. Mike Mullen flew off to Afghanistan for the nth time to reassure Afghan President Hamid Karzai that nothing had changed and that four-star Gen. David Petraeus, the hero of the Iraqi surge, would soon be working his military magic against the ragtag Taliban ragamuffins.

At the same time, Pakistani army chief Gen. Ashfaq Parvez Kayani and intelligence chief Ahmed Shuja Pasha flew in ostensibly to brief Karzai on their campaign to wipe out Taliban’s privileged sanctuaries in the Federally Administered Tribal Areas. More important was the information they could now convey on the chances of a negotiated settlement with Taliban’s main force.

Pakistan’s decision-makers know that FATA cannot be flushed clean of Taliban sanctuaries. Insurgency groups suddenly vanish to pop back up where exhausted Pakistani troops have moved on. And Pakistani intelligence agents are in touch with some of the guerrilla formations that are allied with Taliban chief Mullah Omar, but not under his orders.

No amount of war plans for Afghanistan can work as long as both Karzai and Pakistani leaders believe that negotiations with Taliban — or certain guerrilla factions — are unavoidable.

The McChrystal war plan, endorsed by Petraeus in 2009, isn’t working. McChrystal’s last classified assessment of the war, was given to Petraeus in early June. The reality is that a "mission accomplished" report from Petraeus to Obama could take anywhere from five to 10 more years. But no one is prepared to stick around that long.

The 3,500-strong Dutch contingent, one of only four NATO members, besides the United States, authorized to engage in kinetic operations (Canada, Britain, France are the other three), is going home Aug. 15. Growing Dutch opposition toppled the government and a new one could only be cobbled on a platform of withdrawal from Afghanistan. The Canadian Parliament ordered its Afghan contingent home by 2011.

The future of NATO is at stake in the Afghan conflict. A perceived U.S. defeat in Afghanistan would make the 28-nation mutual defense treaty irrelevant. It may become irrelevant anyway. Defense budgets are being squeezed from year to year, but 20 NATO members responded to an impassioned appeal for more troops from its Secretary-General Anders Fogh Rasmussen, a former Danish prime minister. About 5,000 more were pledged — but for non-kinetic duties.

Petraeus has an encyclopedic knowledge of insurgencies throughout the ages. He is particularly knowledgeable about the French Indochina war, the French Algerian war and the U.S. Vietnam war. He sees many similarities among the three. In each case, the home front collapsed. The U.S. Congress betrayed America’s South Vietnamese allies, by pulling the rug of military aid right from under them, which handed South Vietnam to North Vietnam.

As the victor of the so far successful surge in Iraq, Petraeus knows the Afghan conditions are totally different. And that the July 2011 time frame for the beginning of a U.S. troop withdrawal, as pledged by Obama, is unrealistic. This, in turn, revives fears the U.S. home front support will collapse a la Vietnam as we talk-fight-talk-fight with Taliban.

In a war where insurgents and farmers are often interchangeable, progress is hard to measure. Last February, in a highly publicized assault on Marja in bitterly contested Helmand province, U.S. and Afghan troops "liberated" a town of 80,000. Many Taliban fighters feigned to withdraw by hiding weapons and resurfacing as innocent civilians. Locals were afraid to turn them in to newly arrived Afghan authorities who, in turn, weren’t willing to risk Taliban reprisals.

Marja became what McChrystal called "a bleeding ulcer." Thus, a much larger operation against Kandahar, a city of about 1 million that was the Taliban’s religious capital before 9/11, was postponed.

Today’s Afghan bottom line question is whether Taliban’s leaders would be willing to guarantee that Osama bin Laden and his Taliban cohorts would never be allowed back. And that any breach would automatically unleash U.S. aerial reprisals. The alternative is to fight on and persevere until Taliban concede defeat and Afghanistan is turned in to a viable, self-sustaining (minerals) democratic state. And that would take us through to 2020.

Now in its ninth year, there is neither stomach nor stamina in the Western alliance for another five years, let alone 10.

Arnaud de Borchgrave, a member of the Atlantic Council, is a senior fellow at CSIS and  Editor-at-Large at UPI. This article was syndicated by UPI. Photo credit: Getty Images.