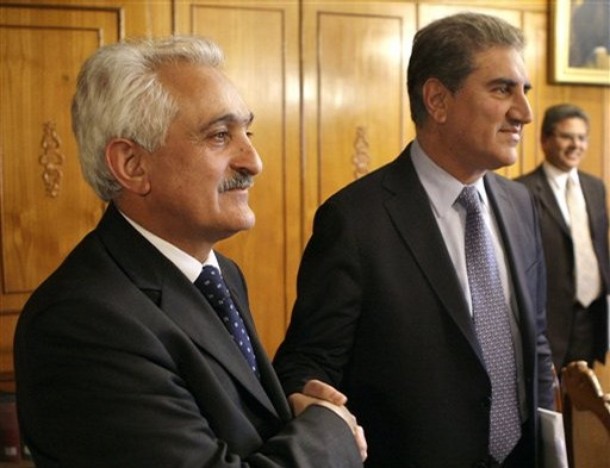 The foreign ministers of Afghanistan and Pakistan have just declared a “new environment” of trust between their two countries, Paul Eckert reports for Reuters.

The minister, Shah Mehmood Qureshi, and Afghan Foreign Minister Rangeen Dadfar Spanta met in Washington ahead of talks with U.S. Secretary of State Hillary Clinton as part of a review of U.S. policy in Afghanistan and Pakistan. “There is a new environment between Afghanistan and Pakistan,” said Qureshi. “The trust level, the confidence between the two countries, has increased manifold,” he added.

Spanta said relations between the neighboring states, which in the past had deteriorated to mutual blame and public bickering over responsibility for border incursions by militants, had “remarkably improved.”

The two spoke to reporters after meeting at a hotel. “The Afghanistan government has confidence in the leadership in Pakistan,” Spanta said after receiving an explanation and assurances from Qureshi about a new Pakistani policy for countering an insurgency in the Swat region in northwest Pakistan.

Given that just this morning I wrote of a trust deficit between Pakistan and Afghanistan, I can’t help but be amused at the announcement. Not to mention skeptical.

Eckert mentions that “Qureshi is also scheduled to meet Senator John Kerry, chairman of the Senate Foreign Relations Committee” and that “Kerry and Senator Chuck Hagel will release a report on Wednesday calling for $4 billion to $5 billion dollars of immediate financial aid to help Pakistan avert financial meltdown.” He’s referring to the Atlantic Council’s Needed: A Comprehensive U.S. Policy Towards Pakistan, the first project of our new South Asia Center that will be unveiled at 11:30 tomorrow morning.