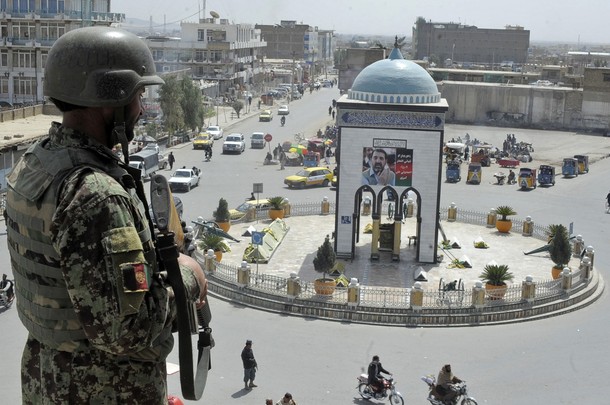 With Nawruz celebrations winding down in Afghanistan, Americans and Afghans are looking for change in policy during the new year. President Karzai recently said “Afghanistan is ready right now to take all security responsibilities completely…to speed up this process, authority should be given to Afghans.” On this side of the Hindu Kush, James Joyner, writing in the National Interest and replayed in this blog, wants the same result but for different reasons.

The bottom line is that we are no closer to “getting Afghanistan right” than we were when Obama took office, and there’s little appetite among the American public, American military, or American allies to stick it out.

Advocates for continuing the fight despite these obstacles argue that the Taliban may come back if Americans leave now. And it well might. But that would be true in 2014, 2016 or 2025.

How many more Americans must die on this impossible slog?

Joyner’s view increasingly reflects American public opinion, where a plurality now disapprove of the way President Obama is handling Afghanistan and 54 percent think US forces should be withdrawn regardless of Afghan readiness, according to a Washington Post-ABC News poll.

Perhaps more disconcerting, 55 percent of Americans think Afghans oppose what the United States is trying to do there. This perception is bitter given the billions of taxpayer dollars spent in Afghanistan every year and the individual gratitude I experienced while deployed there. It is unfortunate that Americans do not know that Afghans often thank coalition forces for their hard work and sacrifices that deployment creates. This certainly varies by province, but the Asia Foundation found that nearly half of Afghans (46 percent) in 2011 say that things in the country are moving in the right direction. This optimism is attributed to reconstruction efforts predominately funded by the United States.

The difference in Americans’ and Afghans’ views are shaped by headlines, but we should not overlook conditions on the ground. While several high-profile incidents highlight the negatives in Afghanistan, the important story of the Enteqal, or transition process, is overlooked. To date, Afghans are now responsible for security for more than 50 percent of the population and the third tranche of transition areas should be announced in the next month. This process will continue over the next year that will enable transition from NATO to the Afghan Army and Police.

Security conditions remain very good in areas that have transitioned thus far from Kabul in the east to Herat in the west; from Mazar-e Sharif in the north to Lashkar Gah in the south; and later this year, Afghan security forces are expected to assume the security lead for two- thirds, or possibly more, of the Afghan people. As the potential unifying influence in Afghanistan, the Afghan forces are better than we thought, and they’re better than they thought they would be. As they move to the fore, they are gaining more and more confidence, and they are gaining more and more capability.

Transition was by no means pre-ordained when NATO and Afghanistan decided on the current policy at the Lisbon summit in fall 2010. At that time, the Afghan Army and Police were struggling with attrition, low pay, and poor equipment. Since NATO assumed responsibility for training and equipping the Afghan security forces, the force has changed—illiteracy has been greatly reduced, attrition has slowed, and combat effectiveness is increasing. Afghans continue to meet their recruiting objectives and the size of the Army and Police exceed the current goals. Today, Afghans are in the fight alongside coalition forces and sustain casualties at a higher rate than American forces. In short, Afghans are fighting and dying for their country.

As we enter the eleventh fighting season since 2001, strategic patience is eroding rapidly in Kabul and in Washington. As policymakers assess progress, it is important to remember that it is the Afghans’ war and not the Afghan War. Success will be based on whether Karzai can reinforce Afghan identity and Afghans can provide for their own security. As eleven years suggest, external actors can only have marginal effect on the country’s stability. Only Afghans can reclaim their sovereignty and provide for their own security. Let us ensure that NATO does not get in the way of the Afghans efforts by overstaying its purpose or applying Western timetables to an Afghan problem.