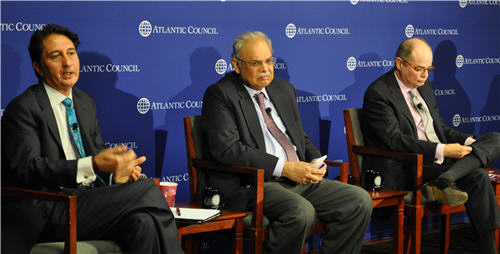 While NATO is far from achieving the objectives in Afghanistan it set out more than a decade ago, more progress has been made than is widely understood. So say distinguished diplomats from the United States, Afghanistan, and Pakistan.

Atlantic Council distinguished fellow Franklin Kramer hosted James Dobbins, former US ambassador to the European Union; Ambassador Riaz Mohammad Khan, former Pakistan ambassador to China; and Ambassador Said Jawad, former Afghan ambassador to the United States in a panel discussion titled “Afghanistan: Back to the Future?” on the fourth anniversary of the launch of the Council’s South Asia Center.

Dobbins, who was US representative to Afghanistan in the wake of the 9-11 attacks and now directs the RAND International Security and Defense Policy Center, said that “three fundamental errors” on the part of the United States hampered the mission. First, in contravention of his own advice, the Bush administration failed to provide a robust peacekeeping force after the Taliban government was toppled. This, despite the fact that Afghanistan had no army or police force to speak of. This allowed the insurgency to get off the ground. Second, also against his advice, the administration failed to keep the initial coalition together, rebuffing offers of further help from Pakistan and Iran.

Third–and he admits he didn’t see this coming, either–the administration was slow to move on reconciliation. He believes much of the Taliban rank and file and some of the leadership could have been brought into the new system and been allies rather than foes. Instead, they were rounded up and sent to Bagram or Guantanamo, sending “a very bad signal.”

Despite these failures and the long insurgency that has followed, polls show that Afghans themselves are much more optimistic about their future than the publics of NATO countries. He cited surveys showing 52 percent believing the country moving in the right direction and 53 percent saying the country is more prosperous than it was five years ago. While the West compares Afghanistan to an ideal vision, Dobbins believes Afghans are more realistic, comparing it to any Afghanistan they’ve ever known. Thus, while 99 percent believe the government is corrupt, a majority nonetheless believes the government is better than any predecessor in memory. Americans, Dobbins lamented, seem not to be able to hold these views in their heads at one time.

Further, Dobbins points to an about-to-be-released RAND study comparing Afghanistan with 19 other post-conflict reconstruction cases. The results show that, while Afghanistan may not be anywhere near meeting Western targets, it nonetheless, with the glaring exception of the “peace test”–the other post-conflict cases stayed post-conflict rather than descending back into war–at or exceeding what should be realistic expectations. It’s in the middle of the pack in terms of democratization, second in improvement of government effectiveness, second in improvement of GDP, and first in human development. All indicators, incidentally, are natural, external measures (UN, World Bank, Freedom House, etc.).

For Dobbins, the biggest concern isn’t the security transition from ISAF to Afghan forces that’s scheduled for 2014 but rather the political transition from Hamid Karzai, who is not running for re-election, to some unknown. His fear is that the contest will put dozens of tiny factions against one another and then pit two candidates in the run-off who each had less than 10 percent support in the first round. The result could be a president with no real support base.

Khan, meanwhile, was much more optimistic. He repeatedly dismissed as absurd the notion that the Taliban could ever seize control of the Afghan government again, saying they simply don’t have the support in an Afghanistan that has changed for the better over the last decade. The people will simply not tolerate a return to fundamentalist oppression in Khan’s view.

In terms of Pakistan’s role in ensuring the stability of Afghanistan, he Khan was circumspect. First, he sought to dismiss the notion that his government secretly supported the Afghan Taliban as a buffer against India. He declared that no serious Pakistani official thought of the Taliban as an asset. At the same time, however, they could not treat them with the same level of hostility and aggression as they have al Qaeda.

Further, while he agreed with Dobbins that reconciliation was key to Afghan political unity, he disavowed any Pakistani role in the process. He argued that for Pakistan to even show that it was enthusiastic about the idea would be to invite suspicion as to motive.

Jawad, who served as Afghan ambassador to the United States from December 2003 to September 2010 but is now a strategic consultant and lobbyist for Afghan causes in DC, argued that the key is economics. As much as the transformation in the political, social, and military arenas matter, none will be possible without a successful transition from a society dependent on foreign aid to one with a robust private sector economy.

Under questioning from Kramer, Jawad urged outside forces, including the NATO countries currently thinking about transitioning their forces out of Afghanistan, to invest in the country’s infrastructure, especially power grids, pipelines, and railiroads that can power the country and facilitate trade with the region.

Dobbins, while acknowledging that grandstanding by Karzai as well as public fatigue makes it harder, argued for a continued US security presence well beyond 2014. His argument was that, while he agreed with Khan that the Taliban was unlikely to retake power, it’s not worth even a small (he placed it at 5 percent) risk given that it could be made even smaller with an investment of $4 billion a year.

In the Q&A, Atlantic Council senior advisor Harlan Ullman argued that the progress that has been made is unsustainable by the Afghans. Specifically, he pointed to the complete lack of logistical capability, to include even such rudimentary things as aircraft and a viable intelligence cadre, in the Afghan army. Additionally, he wondered how it is that Afghanistan would pay the very high cost of simply paying the salaries of the forces that do exist. Jawad allowed as that the hope was that NATO, and especially the United States, would continue to fill those gaps indefinitely.

While Dobbins and Jawad also hoped for a robust role for India in the future of Afghanistan, Khan was clear that Pakistan was more than a little uneasy at that prospect. While there would be no objection from Islamabad in India’s supplying monetary assistance and being a trading partner, it would view Indian forces in Afghanistan, even as trainers, less than favorably.

Prefacing his question, Ullman pointed to the Council’s March 2008 issue brief “Saving Afghanistan: An Appeal and Plan for Urgent Action,” to  which he was a key contributor. It began, “Make no mistake, the international community is not winning in Afghanistan.” Almost five years later, with the mission winding down, that’s still true.

While Dobbins is absolutely right that American expectations were always absurdly unrealistic, the fact of the matter is that wars are fought to achieve political objectives. The American public simply would not have agreed to invest a dozen years, tens of billions of dollars, and 2174 dead troops (and counting) to build an Afghanistan that remains a huge political, economic, and stability question mark.