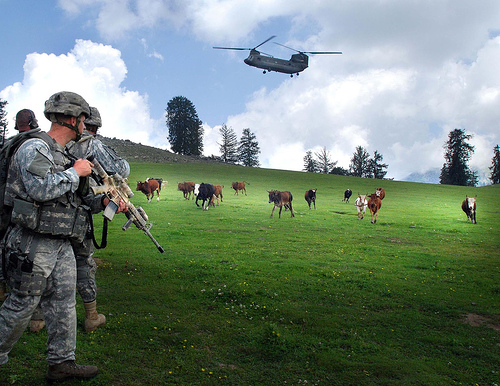 It is now a deeply entrenched conventional wisdom that the decision to “abandon” Afghanistan after the Cold War was a tragic mistake. In the oft-told story, our “abandonment” led to civil war, state collapse, the rise of the Taliban, and inevitably terrorist attacks on American soil. This narrative is now reinforced by dire warnings about the risks to Pakistan from instability in Afghanistan. Taken all together, critics of the Afghan commitment now find themselves facing a nearly unshakable consensus in continuing and deepen our involvement in Afghanistan.

The problem with the consensus is that virtually every part of it is wrong. Abandonment did not cause the collapse of the state. Failed states are not always a threat to U.S. national security. And Pakistan’s problems have little to do with the situation across the border.

First, the collapse of the Afghan state after the Soviet withdrawal had little to do with Western abandonment. Afghanistan has always been beset by powerful centrifugal forces. The country is poor, the terrain rough, the population divided into several ethnic groups. Because of this, the country has rarely been unified even nominally and has never really had a strong central government. The dominant historical political system in Afghan is warlordism. This is not a consequence of Western involvement or lack thereof. It is a function of geography, economics, and demography.

Second, there is no straight-line between state failure and threats to the United States. Indeed, the problem with Afghanistan was not that it failed but rather that it “unfailed” and becameruled by the Taliban. Congo/Zaire is a failed state. Somalia is a failed state. There are many parts of the globe that are essentially ungoverned. Clearly criminality, human rights abuses, and other global ills flourish in these spaces. But the notion that any and all ungoverned space represents a core national security threat to the United States is simply unsustainable.

Third, the problem was the Taliban regime was not that it existed. It was that it was allowed to fester without any significant response or intervention. We largely sought to ignore the regime — refusing to recognize it despite its control of 90% of Afghan territory. Aside from occasional tut-tutting about human rights violations and destruction of cultural sites, the only real interaction the United States sought with the regime was in trying to control drugs. Counter-drug initiatives are not a sound foundation for a productive relationship for reasons too numerous to enumerate here. Had we recognized the Taliban and sought to engage the regime, it is possible that we could have managed to communicate red lines to them over a period of years. Their failure to turn over bin Laden immediately after 9/11 does not necessarily imply an absolute inability to drive a wedge between the Taliban and al Qaeda over time.

Fourth, we are now told that defeating the Taliban in Afghanistan is imperative in order to help stabilize Pakistan. But, most observers seem to think that Pakistan is in worse shape now — with the Taliban out of power and American forces in Afghanistan —  than it was when the Taliban was dominant in Afghanistan. For five years from 1996 to 2001, the Taliban ruled Afghanistan and the Islamist threat to Pakistan then was unquestionably lower. This is not surprising actually. Insurgencies are at their most dangerous — in terms of threat of contagion — when they are fighting for power. The number of insurgencies that actually manage to sponsor insurgencies elsewhere after taking power is surprising low. The domino theory is as dubious in the case of Islamist movements as it was in the case of Communist expansion.

There is a notion that “everything changed on 9/11.”  We are backing away as a nation from that concept in the case of torture. Perhaps we should also come to realize that our pre-9/11 assessment of the strategic value and importance of Afghanistan was closer to the mark that our current obsession with it. We clearly made some mistakes in dealing with the Taliban regime. But addressing those mistakes through better intelligence, use of special forces raids, and, yes, diplomacy is likely a better solution than trying to build and sustain a reliable, pro-Western government in Kabul with control over the entire country.

Dr. Bernard I. Finel, an Atlantic Council contributing editor, is a senior fellow at the American Security Project. This essay was originally published at ASP’s FlashPoint blog. US Army photo used under Creative Commons license.