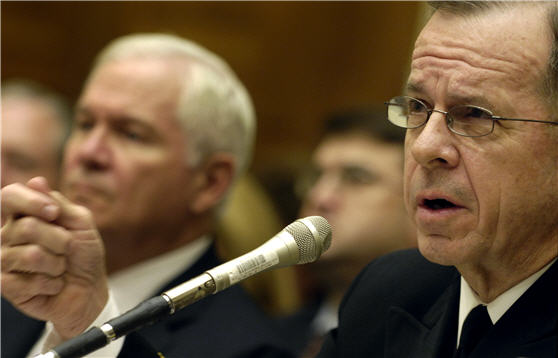 Bob Woodward’s recent Washington Post series making public the discord between the Bush White House and the heads of the American military services will provide a ready excuse for European heads of state, already facing increasing skepticism at home, to absolve themselves of responsibility for failure in that vital region.

This is not, of course, to place the blame at Woodward’s feet. The American public has every right to know what their leaders are up to, especially on such a weighty matter that has enduring national and international political and economic consequences.

Nonetheless, on both sides of the Atlantic and no doubt in the capitols and ministries of defense and foreign affairs all around the world, the fundamental question being asked is, Why did the U.S. president forego (some might argue summarily dismiss) the counsel of his most senior military advisors both at the Pentagon and on the ground in Iraq in favor of the advice of a retired general in the employ of the American Enterprise Institute, arguably one of the most partisan think tanks in Washington?  Was the surge, regardless of its short-term or long-term success, a political move or one based on well-established military strategy and planning?

These are important questions that will undoubtedly be explored at length in the weeks and months ahead.   They are, however, a distraction that will only cloud a more important strategic issue.  And those U.S. pundits, officials and political activists who become singularly focused on these questions will miss the larger security implications of Woodward’s outing of the internal debate:  long-term force generation within the Alliance.

Since NATO agreed to invoke Article V after the attacks of September 2001, the U.S. has implored Alliance members to fulfill their obligations to provide ground troops in Afghanistan and for those members already contributing forces to remove the so-called “caveats” which prevent their troops from engaging in the full-spectrum of operations deemed necessary to succeed on the ground.  Convincing NATO members to fill the Combined Joint Statement of Requirements (CJSOR), the document that sets the minimum military requirements that the Alliance agrees is needed to fulfill military tasks, has not been easy.   With respect to Afghanistan, NATO members have been slow to fill shortfalls in maneuver forces and the ground troops needed to secure the Afghan/Pakistan border.  Consequently, it should not come as a surprise that the combined U.S. and NATO effort to provide a safe and secure environment in Afghanistan has not yet succeeded.

As noted by the most recent German Marshall Fund Transatlantic Trends report, European views of U.S. leadership remain low with 59% viewing U.S. leadership in world affairs as “undesirable.”  This, of course, means that the next administration will have many fences to mend—especially those all-important transatlantic fences.  Its first year will likely be engaged in confidence building measures among allies that until recently has not been required by an incoming administration.

This will be yet another year lost for the Coalition as the Taliban and al Qaeda insurgents gain more military strength and sharpen their propaganda and intimidation skills.

Meanwhile, the Pentagon and military leaders at all levels, will have to work diligently to persuade their counterparts that when it comes to the Alliance’s global operations, domestic U.S. politics will not trump the collective military counsel the Alliance depends on.  The recent testimony of the Secretary of Defense and Chairman of the Joint Chiefs of Staff before Congress may have satisfied some domestic consumers who fully understand the nature of the civilian-military relationship, but Europeans who have listened to the U.S. repeatedly chide them about contributing more troops to the war in Afghanistan may not be easily convinced.

Throughout NATO capitols, national leaders have had to grapple with the din of domestic constituencies that view the U.S. decision to invade Iraq as a unilateral action contrary to their national and NATO interests.  These constituencies have viewed the U.S.’s willingness to “go it alone” as an indication that they are not truly partners in the Alliance but instead red-headed stepchildren to be called upon only when the U.S. is in extremis.  Needless to say, the U.S. has faced an ever-increasing credibility issue that has manifested itself in the form of a lack of collective political will within the Alliance and the very tangible and dangerous unwillingness, perhaps subconscious unwillingness, among members to commit those national forces and resources required to meet the security, economic and political changes faced by the Afghan Government.

In any event, over the course of the next few months, the transatlantic community will need to come to grips with the realities on the ground in Afghanistan in much the same fashion that Admiral Michael Mullen, chairman of the U.S. Joints Chiefs of Staff, has done so recently.  A good start might be to look anew at the opportunity that new U.S. leadership will bring and refocus on the Afghan mission.

James Easaw is a senior fellow at the Atlantic Council.  The views expressed here are solely his own, not those of any U.S. government agency. Defense Department photo.