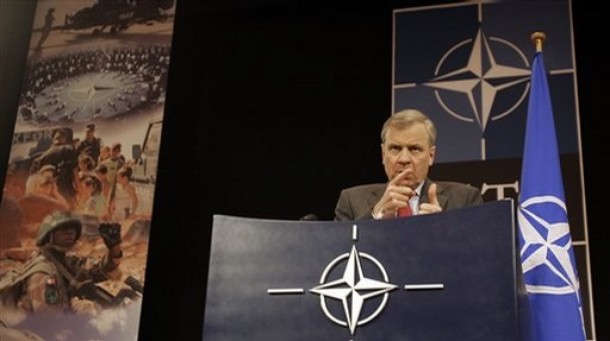 Ivo Daalder, the US Ambassador to NATO, says that we are "seeing the corner and can peek around it in Afghanistan" and that a province-by-province handover of security responsibilities to the host government will "start in the first half of 2011."  But the final handover is not expected until "the end of 2014" and NATO forces will remain in an advisory capacity indefinitely.  "The process will take years," he emphasized.

His formal remarks, at a breakfast meeting with a small number of journalists and think tankers hosted by New America Foundation’s Steve Clemons and Talking Points Memo editor Josh Marshall, were in stark contrast to assessments earlier this week from unnamed intelligence officials in the Washington Post  that the Taliban has been unphazed by the recent military surge.   Reportedly, this assessment is "consistent across the main spy agencies responsible for analyzing the conflict, including the CIA and the Defense Intelligence Agency."

But Daalder was adamant that the surge was working, using the standards that President Obama set forth in his West Point speech outlining the new strategy:  "Target the Taliban.  Train the Afghans.  Transfer responsibility."

Having, for the first time in the nearly decade-long struggle, properly resourced the training mission, Daalder declared, we are finally making tremendous progress.  He pointed particularly to Kandahar province, where the ratio of 10 NATO soldiers for 1 Afghan soldier was now close to 1 to 1.

Because of this progress, we’ll be able to achieve our declared goal of beginning the transfer of primary responsibility in single provinces to the Afghans, with NATO forces remaining in an advisory and support role, starting "in the first half of 2011."   Doing the math, that means within the next eight months.   And, he declared, the last province will be handed off by "the end of 2014."

He repeatedly emphasized that "this doesn’t mean NATO will be gone" and that "the process will take years."   So, those looking to be done with the Afghan mission by a date certain should not get their hopes up.

Aside from some hearty skepticism about what it is that we can see around Daalder’s proverbial corner, it’s interesting, indeed, that a senior administration official went on the record with such a vigorous defense of not only the importance of the Afghan mission but making a commitment to stay the course years into the future, given how controversial that view is not only within the public at large but, especially, the president’s base.  And we’re two working days away from an election in which, unless the pollsters suffer an embarrassment not seen since Dewey turned out not to have defeated Truman at all, the president’s party is expected to get trounced in both Houses of Congress and in gubernatorial races around the country.

Interestingly, too, the ambassador appears to be headed to the Lisbon Summit, a mere two weeks away, with unusual confidence in the steadiness of the Alliance.   Despite widespread notions that the war has irreparably damaged not only NATO’s cohesion but its willingness to engage in out of area operations, he sees just the opposite:  Afghanistan proved that the Allies will indeed fight, even when it’s politically unpopular.  And, despite heated political rhetoric in some capitals to the contrary, he was as confident as any knowledgeable observer on the subject I’ve spoken to that the European Allies will, in the main, be there with us until a successful conclusion to the mission.