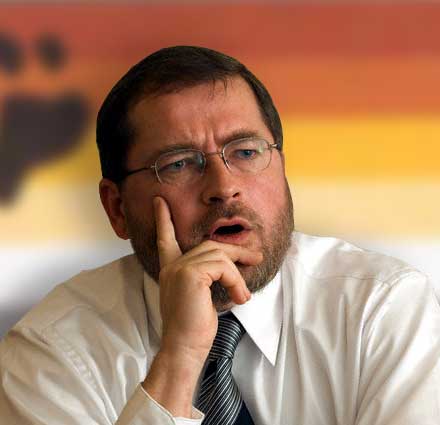 The center-left New America Foundation has enlisted an unlikely ally, conservative tax foe Grover Norquist, to help build a coalition against the war in Afghanistan.

At first blush, this would seem unnecessary.  A CNN poll released January 3 found a whopping 66 percent of Americans opposed the war, with only 35 percent supporting it.  And opposition is even stronger within President Obama’s base, with 80 percent of self-described Liberals and 74 percent of Democrats opposing.

But Democratic strategists fear, not without reason, that it would be political suicide for the president to call for a quick end to the war, as Republican critics would hammer him as weak — and worse.  And, the same CNN poll shows, slim majorities of both Republicans and self-identified supporters of the Tea Party (52 percent each) supported the war.  Self-identified Conservatives are on the fence, with 49 percent favoring and 49 percent opposing the war.

Norquist, who talked to a group of us at a dinner hosted by NAF’s Steve Clemons, believes fiscal conservatives, desperate to slash the massive budget deficit, yearn to join together with the center-left and end the war.

His ammunition:   A new poll commissioned by the Clemons’ Afghanistan Study Group showing that, when informed that the war in Afghanistan was costing American taxpayers $117 billion a year, 71 percent of conservatives and 67 percent of Tea Partiers said they were "very worried" or "somewhat worried" about the financial burden of the war.  In that context, 57 percent of conservatives and 55 percent of Tea Party supporters agreed, "The United States can dramatically lower the number of troops and money spent in Afghanistan without putting America at risk."

Now, as I told Clemons and Norquist during the Q&A session, I think the poll is a publicity stunt of dubious probative value. (I may have used more colorful language.)  The truth of the matter is that most Americans have only the vaguest notions of how much our government spends and therefore have no context whatsoever against which to judge numbers.  "$119 billion" is a scary number to bandy about but it’s a tiny fraction of a $3.69 trillion budget.   One could imagine that, if people were told that the Department of Labor spends $117.5 billion a year, they’d wonder whether we couldn’t get by without that, too.  Much less $915.5 billion for Health and Human Services.   I’m guessing NAF won’t be polling on that, though.

Whether we’re getting good value for our investment in Afghanistan isn’t a matter of uninformed reaction to big numbers but rather an assessment of costs and benefits.  Indeed, Norquist readily acknowledges this, saying we need to have "a conversation" "about the vast expenditures of cash, the vast expenditures of other people lives, and the opportunity cost." He insists that, while everyone, himself included, agreed that we needed to go to war to "hit back at those who hit us on 9/11," we’ve not really had an honest dialog about the years-long rebuilding effort that followed toppling the Taliban.

While we’ve certainly talked about it — rather a lot in fact — over the years, it’s mostly been at the level of platitude.   We’ve got to "finish the job" and "achieve victory," however that’s defined.  And, Norquist’s least favorite, "we have to support the troops."    The heated political environment, in which openly talking about ending the mission short of achieving our lofty goals would bring catcalls of "surrender" and "appeasement" and "betrayal," makes an adult conversation difficult.

So, Norquist is trying to use the cost issue as a means of getting around this dilemma.  But, while fiscal issues are his bread and butter, it’s not what’s driving his opposition to the war.

Further, he argues that Republican icon Ronald Reagan would never have gotten us into this position.   He reminded the audience that Reagan’s reaction to the 1983 bombing of the Marine barracks in Lebanon, which killed 241 Americans, "was not to stay, it was to leave.   Ronald Reagan didn’t decide to fix Lebanon. I think that’s helpful in getting the conversation going on the right."

Norquist is confident that the result of that conversation will go his way.  I’m not so sure.

First, the politics mitigate against it.   We’re gearing up for a presidential election in which the Republican candidates will vie amongst themselves to demonstrate that they’re the "toughest," with no serious contender likely to come out against the war.   It’s hard to imagine President Obama switching course in that environment.

Second, whatever private misgivings he might have about the war, this president has committed himself.   The decision, taken after months of painful deliberation, to double down on the effort with the Afghan Surge truly made this "Obama’s War."  And firing two commanders and then putting the most charismatic and famous general in a couple generations in charge reinforced that.

Beyond all that, while domestic politics is always a major consideration, war is the ultimate exercise in foreign policy.    The United States has cajoled its allies to go along with us on this, pledging to see it through until at least the end of 2014.   We’ve made that promise to Hamid Karzai and others in Afghanistan, who have literally put their lives on the line in relying on it.  And we made it again in Lisbon with our partners in NATO.

And, of course, there’s the matter of uncertainty.   While Afghanistan may well devolve into a civil war when we leave, whether that’s in six months or six years, no president wants to be the one left holding the bag when it happens.   Especially not with the regional repercussions it might bring.  And definitely not in an election year.

So, the fact that we’re spending $119 billion a year to win a war in a country with a $14 billion GDP, that we set a record with 499 Americans killed in action last year, and possibly limiting our ability to respond to other crises as a bonus in exchange for a very uncertain outcome is quite likely something that we’re just going to live with for the foreseeable future.