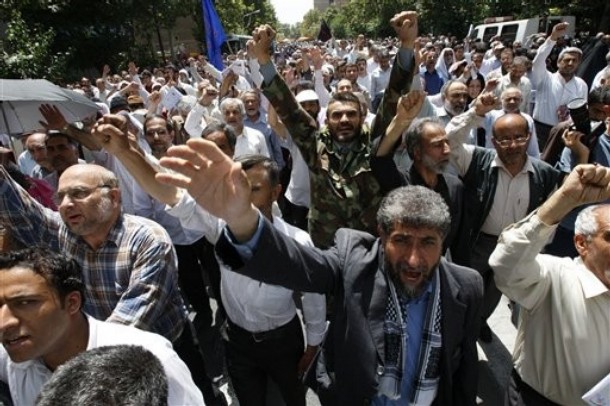 There is no better illustration of the futility of the $1 trillion Iraq war than news photos of a long line of gasoline tankers lined up bumper to bumper as they leave Iraq to enter Iran.

The Iraq Study Group, led by Lee Hamilton, the prominent Democrat who heads the Woodrow Wilson International Center, and James Baker, whose Institute for Public Policy is at Houston’s Rice University, warned in 2006 that Iran, now rid of erstwhile enemy Saddam Hussein, was already wielding more influence in Iraq than the United States.

The only sanction that would seriously undermine the mullah’s military regime is a severe shortage of gasoline. Iran is awash in oil but lacks refining capacity and has to import 60 percent of its gasoline. A lack of governance in Baghdad has allowed Iran to strike a sub-rosa deal for gasoline imports.

Iraqi Prime Minister Nouri al-Maliki’s coalition government narrowly lost last March’s national elections (89 to 91 seats, both rivals short of the 163 seats needed to govern alone). Endless palavers since then have failed to produce a new coalition. With suicide bombers trying to reignite a bloody trail of sectarian violence, Joe Biden flew into Baghdad over the Fourth of July weekend for his fifth visit since becoming U.S. vice president. He urged Iraq’s political leaders to form an all-party coalition ASAP.

On his first night there, sirens wailed and over an extensive loudspeaker system a voice shouted, "Duck and Cover." Five mortar rounds exploded in the Green Zone, a large maximum-security area in the heart of Baghdad that houses the $700 million, 100-acre U.S. Embassy, now the world’s largest.

There was a time when the late dictator Saddam Hussein (executed Dec. 30, 2006) was the most effective barrier to Iran’s regional ambitions. In 1980, he launched an invasion of Iran which led to a Mexican standoff that lasted 8 years and cost 1 million dead on both sides. Iranian teenagers were pressed into service as "suicide volunteers" with a golden key around their necks — for the gates of paradise that would allow them to meet up with 72 virgins.

Until now those advocating military action against Iran’s nuclear installations were found mostly in Israel and among the "neocon" lobby in Congress, and its sympathizers in think tanks and the media. In recent weeks, the ranks of those who now concede the inevitability of a military showdown with Iran’s theocracy-cum-military regime have widened to include normally less bellicose politicians and their military friends.

Three former CENTCOM commanders have said on different occasions we should learn to live with an Iranian bomb, much the way the United States adjusted to Russian leader Joseph Stalin breaking America’s atomic and then nuclear monopoly. Later China’s Mao Zedong boasted that in a nuclear war hundreds of millions of people would die and China would emerge victorious as it would still have several hundred million survivors. That was just as much of an existential threat for the United States as Iran is to Israel.

Chairman of the Joint Chiefs of Staff Adm. Mike Mullen also expressed reservations from time to time. The Joint Chiefs and former CENTCOM commanders know better than most experts that Iran has formidable asymmetrical retaliatory capabilities, from the narrow Straits of Hormuz that still handles 25 percent of the world’s oil traffic; to Bahrain (U.S. Fifth Fleet headquarters where the population is two-thirds Shiite and the royal family Sunni); to Dubai, where some 400,000 Iranians reside, many of them "sleeper agents" or favorable to Tehran; to Qatar, now the world’s richest country with per capita income at $78,000, which supplies the United States with the world’s longest runway and sub-headquarters for CENTCOM, and whose LNG facilities are within short missile range of Iran’s coastal batteries; to Saudi Arabia’s Ras Tanura, the world’s largest oil terminal, and Abqaiq, nerve center of Saudi’s eastern oilfields) all are vulnerable to Iranian sabotage or hundreds of Iranian missiles on the eastern side of the Gulf, from southern Iraq down to the Strait of Hormuz.

Officially, all the Arab rulers of the Persian Gulf and other Arab leaders are strenuously opposed to any Israeli or U.S. airstrikes against Iran’s nuclear facilities. But that opposition is eroding rapidly.

Speaking at the Aspen Institute in Colorado last week, United Arab Emirates Ambassador to the United States Yousef al-Otaiba said publicly — before denying it — "I think despite the large amount of trade we do with Iran, which is close to $12 billion, there will be consequences, there will be a backlash and there will be problems with people protesting and rioting and very unhappy that there is an outside force attacking a Muslim country; that is going to happen no matter what."

A former Arab leader, in close touch with current leaders, speaking privately not for attribution, told this reporter July 6, "All the Middle Eastern and gulf leaders now want Iran taken out of the nuclear arms business and they all know sanctions won’t work."

"Sanctions can be effective only if coupled with open preparation for the military option as a last resort … publicly playing down potential military options has weakened our leverage with Tehran, making a peaceful resolution less likely."

The temptation for Obama to double down on Iran will grow rapidly as he concludes that Afghanistan will remain a festering sore as far as anyone can peer into a murky future, hardly a recipe for success at the polls in November. With a war in Afghanistan, which is bound to get worse, and a military theater in Iraq replete with sectarian violence, the bombing of Iran may give Obama a three-front war — and a chance to retain both houses of Congress.

Arnaud de Borchgrave, a member of the Atlantic Council, is a senior fellow at CSIS and Editor-at-Large at UPI. This article was syndicated by UPI. Photo credit: AP Photo.