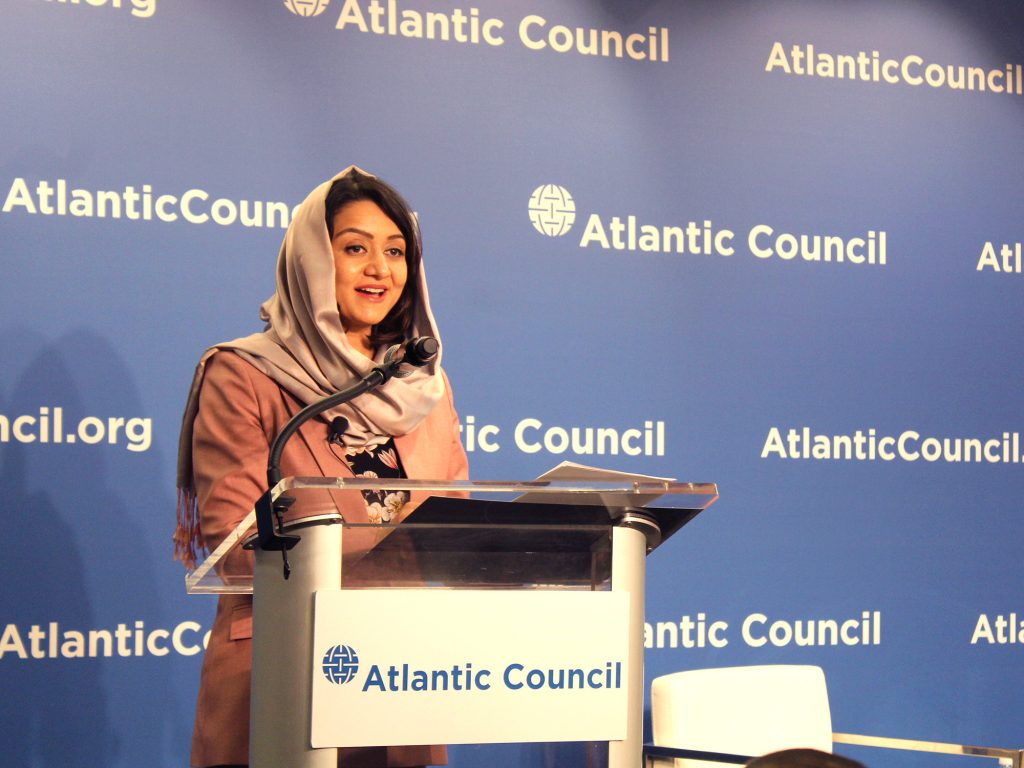 Afghanistan’s presidential election on September 28 was “a critical moment” for the country, as voters went to the polls not only to select a new leader, but also to choose “democracy over the other possibilities,” according to Roya Rahmani, Afghanistan’s ambassador to the United States. Speaking on October 16 at the Atlantic Council, Rahmani said that the election was “about moving forward and not backward.”

In Afghanistan’s fourth election since the US invasion in 2001, and after eighteen years of war, nearly three million Afghan citizens took to the polls on election day despite continued attacks from the Taliban. Incumbent candidate, Ashraf Ghani, and three-time presidential candidate, Abdullah Abdullah, both claimed victory before the election commission had even counted votes. The contesting claims of victory will surely draw scrutiny on the electoral process, which this year included the use of biometric voter verification, voter registration, and voter lists to prevent widespread ballot stuffing that has plagued previous elections in Afghanistan.

The two leading candidates and the Afghan people will have to wait for the final results of the election, however. The networks that transfer the biometric data from the polling have slowed the official tally, Rahmani explained, and though the independent election commission has taken steps to speed up the process, official results are likely to be delayed by a least a few days.

Despite international press coverage about the election’s low turnout, Rahmani remained unconcerned, arguing that “this election again happened when people went to the polls knowing that they were a direct target of the Taliban.” Despite these threats, the September 28 contest saw the lowest number of casualties from violent attacks for any election day since the US invasion in 2001—some eighty-five people killed and another 373 wounded. Rahami credited the Afghan National Security Forces for being largely successful in protecting voters. “The 70,000 that were dispatched went into the election with complete preparedness,” she explained.

The US-Afghan relationship has been strained since the United States began negotiating a peace settlement with the Taliban in February. According to US President Donald J. Trump, continued attacks, and the death of a US solider, dashed hopes for a successful agreement in September. Talks resumed just last week, but the Afghan government continues to be barred out of the negotiations at the behest of Taliban, leaving them without a hand in their own future, and possibly exacerbating the low election turnout. Rahmani explained, as “the campaign season started later than the usual, and that was because of a lot of the uncertainties…during the talks, and people were wondering what’s going on, how the election is going to take place, whether it’s going to take place or not.”

Rahmani hopes that Afghanistan’s partners, allies, and people will be patient with their electoral process, as voters “demonstrated our resolve [for] democracy, [our support] for a system of [a] republic, and we hope that our partners could also trust in it as much as we do.” However, given that the Afghan government has been left out of the negotiations, Rahmani said that she is “concerned not necessarily about the decisions [that will] be made,” in the current negotiating process, but rather “how these decisions [will] be made.” She explained that “more than anything, Afghans want an end to the conflict by a political settlement. We are tired of violence. Today more than ever, our citizens know that the military cannot provide a full solution to the challenges we face.”

Despite the continued violence and slow results, Rahmani remains optimistic. “For the first time in a very long time, I see the path to peace and prosperity clearly visible before me. Though we still have a long road to travel, today we have much to celebrate.”