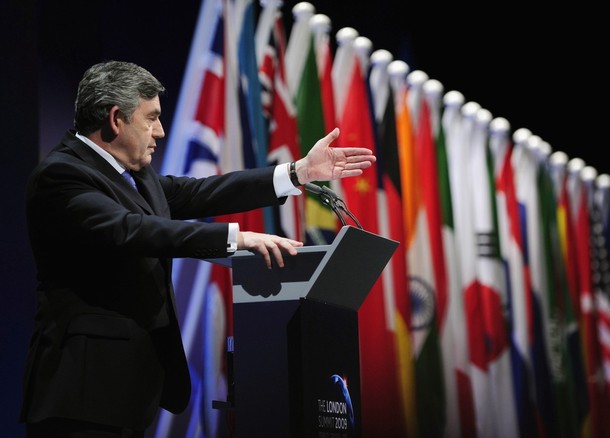 Now that the dust has settled from the London G20 meeting earlier this month, what did it add up to? The media was not kind to British PM Gordon Brown’s boast that, “I think the New World Order is emerging.”

The Financial Times was a bit more modest, editorializing that the G20 represented laying the “first bricks of a new world order.”  President Obama was still more modest saying, “I guess we did OK.”

Is the global economic crisis accelerating moves toward a New World Order? Unclear. But at a minimum it is updating the international system to adapt to new realities – at least in the economic realm. Examples:

Beyond process there were substantive measures: trebling IMF resources to $750 billion, with another $250 billion from regional development banks for trade financing is real money that is much needed. Progress was made toward putting in place new regulatory and transparency measures aimed to preventing another financial meltdown. Lending its voice to resisting protectionism was also useful (though given that 17 of the 20 have nonetheless adopted trade restrictions, one may be excused for wondering if they are serious.)

More broadly, the whole agenda of new regulatory, accounting and transparency measures was not set by the Usual Suspects (G-7), but by consensus of actors including the BRICs (Brazil, Russia, India, China) as well Saudi Arabia, and Turkey and Mexico. No accident that the world’s new creditors, Gulf states and East Asia are at the High Table.

This may not seem like a political earthquake. But the ground is slowly shifting. The emergence of the G20 is providing a glimpse of a 21st century the promises to be very different from its predecessor. We are witnessing the Rise of the Rest.

Consider that even two decades after the end of the Cold War global institutions have been remarkably inert. The U.N, Security Council still has the same five permanent members. Efforts to reform it have gone nowhere. The UN Security Council, the G-7, the G-77, the Non-Aligned Movement (non-aligned against what?) all appear outmoded relics. The whole notion of North-South is ripped to shreds by the economic successes of India, China, Brazil and others. Yet they all demonstrate a powerful tendency toward political inertia that seems inherent in international institutions.

It took the shock of the worst global financial and economic crisis since the 1930s to allow the current G20 to take shape – and to spur reform of national and global financial rules. But it would be wise to keep expectations of the G20 low: one good rule of thumb is that substantive results from international meetings tend to be in inverse proportion to the number of participants. That said, even discounting some of the general rhetoric about global cooperation, the meeting suggests that the G20 is emerging as a significant forum, perhaps eclipsing the outmoded G8 as the High Table for global economic consensus.

It is uncertain how far this systemic shift may go. If the G20 is institutionalized, as appears to be the case, it raises the obvious question, why continue a separate G-8? And like the commitment to scrap the idea of automatically appointing a Frenchman to run the IMF and an American the World Bank, to the degree that changes in global institutions accommodate new realities, they will come at the expense of the West, particularly, at Europe’s expense. Such moves, like reapportioning voting shares in the World Bank and IMF are unlikely to go down easy.

Nor should a High Table with new players be expected to necessarily be more effective. The recent G20 meeting evidenced the sort of pushes, pulls and tensions that are almost inevitable as adjustments play out. We saw a coalition of the BRICs plus Mexico raising questions about the dollar as a reserve currency. We are likely to see various sub-groups (perhaps the G-7) lobbying to shape outcomes at the G20 as well as a other rule-setting forums.

The larger question is: will such efforts at political inclusion now be a trend that spills over into political and security fora? Certainly, the inability to effect reform at the UN, particularly of the Security Council suggests it would be a tall order. Given that G20 actors include major players who are not democracies with various regional interests, one suspects replicating a G20-type group in areas beyond trade and finance will be rather problematic.

It will likely be a far messier process of trying to manage political, security and environmental aspects of global governance. But with actors representing 80% of the global economy and some 60% of the world’s population, it will arguably reflect a consensus widely perceived as more legitimate, however difficult it may be to reach such agreements. The upcoming UN climate change meeting next December, and the NPT Review conference in 2010 may prove important tests of the new inclusionary politics.

Robert Manning is a Senior Advisor to the Atlantic Council.  The views expressed here are solely his own, not those of any U.S. government agency.   Photo: Reuters Pictures.