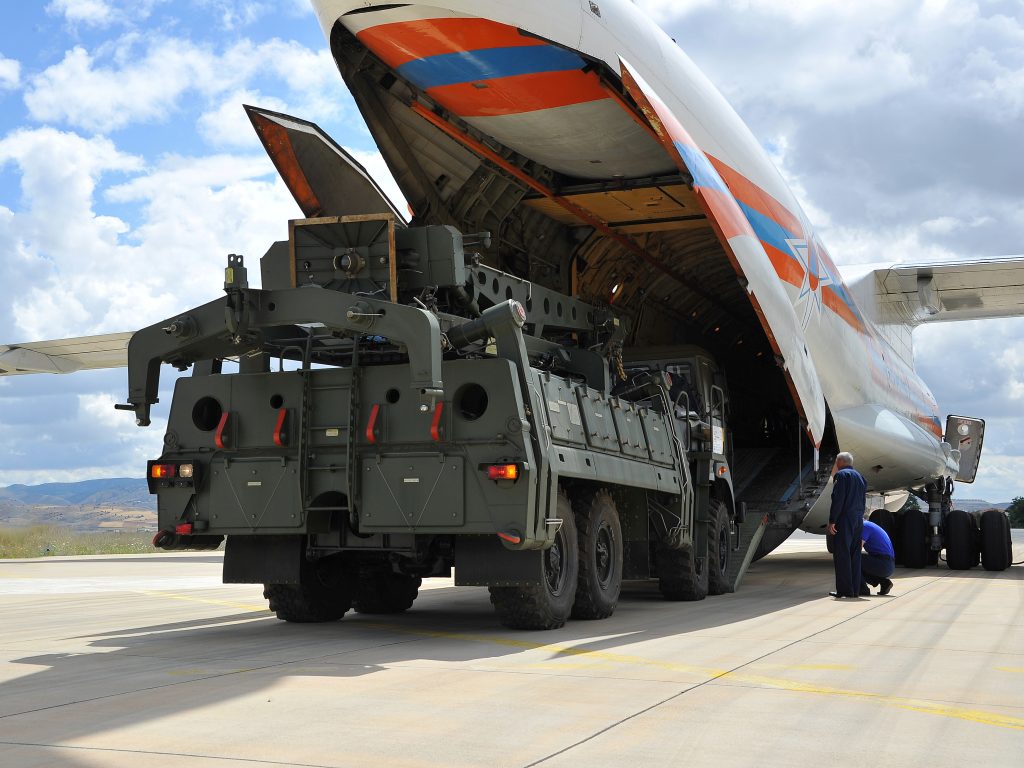 The delivery of a Russian air defense system to Turkey has jeopardized the defense relationship between the United States and one of its most important NATO and regional allies.

The first components of the Russian-built S-400 air defense system arrived in Ankara on July 12, according to the Turkish ministry of defense, beginning the fulfillment of an agreement Turkey signed with Russia in December 2017.

US officials have opposed the deal over fears that Turkey’s use of the system would expose NATO’s defense network and new F-35 aircraft to Russian software from the S-400, potentially providing information from both to Moscow. “NATO will not allow any electronic connectivity between their networks and any Turkish device that is on the same network connected to the S-400,” according to Patrick O’Reilly, a nonresident senior fellow in the Atlantic Council’s Scowcroft Center for Strategy and Security. Turkish authorities have also stated that Turkey is not considering plugging in the S-400 into the NATO system.

The Trump administration and the US Congress have explicitly told Ankara that the United States would cancel Turkish participation in the F-35 aircraft project if the S-400 purchase was completed. US Vice President Mike Pence warned on April 3 that “if Turkey completes its purchase of the Russian S-400 missile system, Turkey risks expulsion from the joint F-35 program, which will harm not just Turkey’s defense capacity, but it may cripple many of the Turkish component manufacturers that supply that program.”

Turkey had been a Level III partner in the F-35 development program, investing more than $1 billion and manufacturing key components of the fighter. The first F-35 fighter for Turkey was completed in June 2018, and some Turkish pilots and maintenance staff are already training in the United States.

On June 6, US Acting Secretary of Defense Patrick Shanahan informed Turkish Defense Minister Hulusi Akar in a letter that the official procurement of the S-400 would trigger “a plan to discontinue Turkey’s participation in the F-35 program.” While Shanahan noted “our valued relationship,” he promised that “Turkey will not receive the F-35 if Turkey takes delivery of the S-400.”

This promise was echoed by Congressional leaders, such as US Senator Chis Van Hollen (D-MD) who tweeted on July 12 that “Turkey has made a very bad choice.” In an April op-ed in the New York Times, US Senators Jim Inhofe (R-OK), Jack Reed (D-RI), Jim Risch (R-ID), and Bob Menendez (D-NJ) promised that “by the end of the year, Turkey will have either the F-35 advanced fighter aircraft on its soil or a Russian S-400 surface-to-air missile defense system. It will not have both.”

The senators further warned that the United States would subsequently impose sanctions on Turkey for the purchase under the Countering America’s Adversaries Through Sanctions Act (CAATSA). If imposed, potential CAATSA sanctions have “the potential to do material harm to the Turkish economy,” according to William Wechsler, director of Middle East Programs at the Atlantic Council.

Ankara has claimed that it has no other choice but to purchase the S-400 system. Speaking at the NATO Engages event in July 2018, Turkish Foreign Minister Mevlüt Çavuşoğlu argued that Turkey’s current defenses are inadequate and previous attempts to purchase missile systems through NATO allies had been rebuffed. “NATO is able to cover only 30 percent of my airspace,” he said. “Who is going to protect my nation, my people, from the missiles coming from Syria or any other countries?”

The United States attempted to reach a compromise with Ankara by offering to sell it a Patriot missile system, but disagreements over technology sharing and price increases, as well as skepticism that the US Congress would allow the system to actually be delivered, caused Turkey to reject the proposal in March.

Despite the strong reaction from Washington, “there is still time for [Turkish President Recep Tayyip] Erdoğan to backtrack,” according to Christopher Skaluba, director of the Transatlantic Security Initiative in the Atlantic Council’s Scowcroft Center for Strategy and Security. “The system still needs to be fully delivered and assembled, training needs to be done for Turkish soldiers, and it needs to be integrated into Turkish air defenses,” he explained.

There is a potential compromise that would allow Turkey to keep the S-400, Matthew Bryza, a former US ambassador to Azerbaijan and a nonresident senior fellow in the Atlantic Council’s Global Energy Center said. There could be an agreement “to make sure the missile system’s radars are not functioning whenever an F-35 is flying…accomplished in a verifiable way by setting up a data link between Washington and Ankara.” Further assurance could be given if “an intelligence-sharing cell was established in Ankara that could be staffed twenty-four-seven by a US and a Turkish military officer.”

So far, however, compromise has been elusive. In April, Çavuşoğlu insisted that the S-400 was a “done deal,” and dismissed US threats about retaliation. The foreign minister said that US President Donald J. Trump had assured Erdoğan that the disagreement would be resolved and that the F-35 program would not be threatened. Bryza warned, however, that “if President Trump fails to deliver on these apparent pledges, President Erdoğan will likely feel duped and tension in US-Turkey relations will intensify.”

Wechsler explained that the lack of compromise between the United States and Turkey is due to “perceptions within Turkey’s leadership that the United States has across multiple administrations been a destabilizing force in the region and within Turkey itself, and also that Turkey is so important due to its geography, demographics, military, and economy that US concerns can be disregarded, and US threats can be safely dismissed.”

All of the potential outcomes of this open discord between the United States and Turkey “represent undeniable victories for Russian foreign policy,” Wechsler said, as Moscow has successfully driven a wedge between key NATO allies. “We are not going to kick the Turks out of NATO,” Skaluba cautioned, as it “would be self-defeating to do so and hand Putin a major win.” But the use of the system means “the Turks will need to be limited in certain ways operationally, and the details of how that might play out will be a matter of serious discussion inside the Alliance.” O’Reilly said that Ankaras could be “insulated from the rest of NATO from now on due to cyber and intelligence vulnerabilities they would introduce to the NATO missile defense and command and control networks.” He added that “Turkey hosts a critical US X-band missile defense radar, and the S-400 purchase will greatly complicate NATO’s ability to share data from that radar with the Turkish military.”

Bryza is confident that eventually Ankara and Washington will work the issue out. “Ankara will realize Turkey’s security is more likely to be safeguarded through active membership in NATO and a close alliance with the United States rather than choosing Russia as an alternative,” he argued. Skaluba agreed, noting that while the S-400 system is viewed as incredibly important by the Turkish military, “it is difficult to fathom that they’d give up the F-35 for this.”