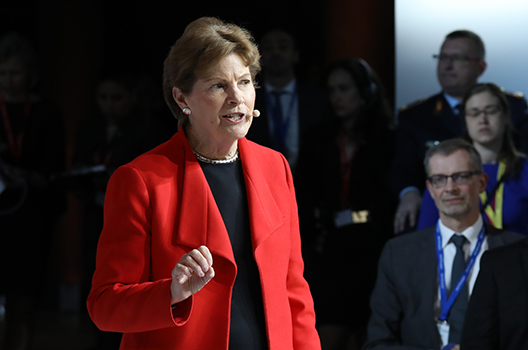 Following the first ever speech by a NATO Secretary General to the United States Congress, Washington has made it clear that US support for the transatlantic alliance remains steadfast.

“The response to the secretary general’s speech was very strong [and] bipartisan,” US Senator Jeanne Shaheen (D-NH) said at the NATO Engages event in Washington shortly after NATO Secretary Jens Stoltenberg’s address to Congress on April 3. “It was not like the usual addresses we see in Congress where the Democrats stand up on one thing and the Republicans stand up on another,” she explained.  “Everyone stood up an applauded.”

Congressman Mike Turner (R-OH) agreed with Shaheen, saying that “it was an extraordinary speech,” which demonstrated that “we are at a great point for the Alliance.” He particularly appreciated that the secretary general “credited the Trump administration’s focus on the 2% [goal] as actually having an effect.”

Stoltenberg reported to Congress that all NATO allies are taking tangible steps to increase their defense spending, following a contentious NATO Summit in July 2018, which saw US President Donald Trump heavily criticize NATO allies for not contributing enough to NATO. “Before they were cutting billions,” Stoltenberg told Congress. “Now they are adding billions.” NATO Deputy Secretary General Rose Gottemoeller also echoed Stoltenberg’s praise, saying that “President Trump has been an important catalyst to push, especially on the burden sharing front but also to push on other areas as well,” such as building specific new capabilities to fill shortfalls in the Alliance’s forces.

The Trump administration’s criticism of NATO allies on burden-sharing, trade, and energy, has led a renewed focus in the US Congress to show support for the transatlantic alliance. “We have had more votes in support of NATO in the last two years than we have had at any time since the fall of the Berlin Wall,” Shaheen said. “Congress is not often accused of being subtle,” Congressman Gerry Connolly (D-VA) added, but the reception Stoltenberg received showed “many layers of significant communication on a bipartisan basis by the United States Congress” to NATO allies.

“The message should be clear to everyone,” Shaheen argued. “NATO is supported in the United States and [members of Congress] reflect the views of our constituents.”

Speaking at a NATO Engages session with NBC Chief Foreign Affairs Correspondent Andrea Mitchell after his address to Congress, Stoltenberg said the message was received. “Support for NATO is rock solid in the United States,” he explained, noting that despite criticisms, Trump “has expressed support for NATO again and again.”

Stoltenberg conceded that “despite the great historic success of NATO and…that we have been able to preserve peace and stability for seventy years, there are questions being asked about the strength of our partnership both in Europe and North America.” But he pushed back on any suggestion that current disagreements within the Alliance means that the United States is pulling back from its commitments to defend its allies. “I think the strongest expression of the US security guarantee is the presence of American soldiers in Europe,” he said. “They are increasing their presence in Europe with new forces, more prepositioned equipment, [and] more exercises.”

The secretary general also reminded the audience that NATO remains in the United States’ interest, as European allies provide the United States with key capabilities in areas such as surveillance and cybersecurity, as well as providing Washington with a platform to project power globally. “The US Africa Command is not in Africa; it is in Stuttgart, Germany,” Stoltenberg said. “US soldiers who have been taking part in operations in the Middle East…are airlifted out of those battlefields into [US baes in Germany] Ramstein and Landstuhl and there, their lives are saved,” he added.

Amid the celebrations of the Alliance’s seventieth birthday, Stoltenberg argued that the way to strengthen NATO amidst all of the talk of division, is simply to change the rhetoric surrounding the transatlantic relationship. “Just start to speak more nicely about the Alliance,” he said. “That will actually improve a lot.”