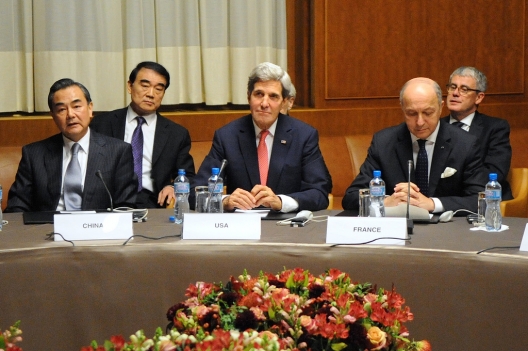 But Still Only a First Step

The announcement early Sunday morning in Geneva of an initial agreement between the P5+1 world powers and Iran represents a significant achievement in long-standing efforts to halt the latter’s nuclear program.

Much ink has already been spilled debating the merits of this package of confidence-building measures (CBMs), but there are three key aspects which warrant further review: how the Geneva deal is a bigger and better deal for both sides than previous CBM proposals; the significance of continued enrichment at the previously secret Fordow facility; and the looming challenges in negotiating a final, comprehensive agreement.

First, this initial agreement is a marked improvement over previous iterations discussed as recently as this spring. The CBM offer tabled by the P5+1—the five permanent members of the UN Security Council (UNSC) plus Germany—in Almaty at the beginning of this year has long been forgotten. But, as reported at that time, the P5+1 made three fundamental asks of Iran: a halt to 20 percent enrichment, neutralizing Iran’s existing 20 percent enriched uranium stocks (through shipment to a third country, conversion to oxide, and/or dilution to 5 percent enriched uranium), and putting the Fordow facility into a state of reduced readiness and halting all enrichment there. In exchange, the P5+1 would agree to no further UNSC sanctions, no additional European Union (EU) sanctions, and a suspension of EU/US sanctions on the trade of gold, precious metals, and petrochemicals by Iran.

However, the Geneva agreement is considerably more expansive in scope. The P5+1 have also secured an agreement by Iran to cap the size and sophistication of its enrichment capability at the Natanz facility and a binding pledge from Iran to suspend fuel production and related activity at the Arak heavy reactor facility under construction. These concessions help extend Iran’s so-called breakout timeline—how quickly Iran could move to produce sufficient highly enriched uranium for a first nuclear weapon.  It also helps ensure that Iran does not trigger a regional crisis by introducing fuel into the Arak reactor, which could risk an early military strike. Iran also benefits from the agreement’s expanded terms; not only does it secure the sanctions relief outlined in the Almaty proposal, but it also gains access to a small portion of its currency reserves frozen in overseas accounts and the establishment of a special financial channel for humanitarian trade. This allows President Hassan Rouhani to demonstrate to his domestic rivals that diplomacy can translate into real results for Iran while enabling the P5+1 to quickly shut off this access if the agreement flounders.

However, one major concession to Iran was to allow continued enrichment at the Fordow facility in return for greater international oversight. A key demand of the P5+1, going back to the revelation in September 2009 that Iran was secretly constructing a small enrichment facility buried deep underground on a military base, was for Iran to immediately halt all construction and forego enrichment operations at the Fordow facility. Fordow has assumed an outsize significance relative to its size for several reasons. The facility was constructed in secret, raising questions over its genuine purpose. The facility, housing only sixteen cascades, or approximately three thousand centrifuges, is too small to reliably produce fuel for a legitimate civilian nuclear program, but is ideally sized to produce covert high enriched uranium for a nuclear weapons program. Finally, its location deep underground provides the facility greater protection against a military strike and potentially provides Iran a “zone of immunity” to proceed with an eventual breakout.

For over the past year, Iran has unilaterally chosen to limit operations at Fordow, enriching 20 percent uranium only at four cascades while another twelve installed cascades remained dormant. Nevertheless, the P5+1 continued to emphasize shutting down all enrichment at Fordow. But the interim agreement concluded in Geneva allows for continued enrichment at Fordow, albeit only at a 5 percent level. So what happened? Iran likely strongly resisted any efforts to shut down Fordow, viewing it as an effort to roll back what it sees as the irreversible progress of its nuclear program. P5+1 negotiators certainly pushed hard, but in the end likely judged that the benefits of enhanced access to Fordow through daily International Atomic Energy Agency (IAEA) monitoring and the gains it achieved on capping Natanz and halting all Arak-related activity were sufficient for an interim agreement. The ultimate status of Fordow, however, will be one of the key sticking points in any comprehensive agreement and Iran may argue that its continued operation during a CBM phase establishes a precedent for its permanent acceptance.

As difficult as it was to reach this interim agreement, the really hard part is yet to come. Negotiations on an end state are designed to occur over the next year, although in reality both sides may have much less time. The initial set of confidence building measures only last for six months, and while they can be renewed by mutual consent, both sides may need to demonstrate real progress in the negotiations on an end state to withstand domestic opponents set on torpedoing diplomacy.

Three key issues are likely to dominate the agenda in future negotiations.

The first is the size of Iran’s enrichment program in an end state. P5+1 negotiators are unlikely to accept a program larger than Iran’s current enrichment capability at approximately ten thousand operating centrifuges. They will likely demand a significant reduction, especially as Iran cannot point to any legitimate civilian requirements for nuclear fuel at the present time. Iran will likely insist on a much larger enrichment program, for example by pointing out that it should retain a backup fuel source for its Bushehr power plant in the event the current Russian fuel supply is halted. The annual fuel requirements for a Bushehr-sized reactor significantly exceed ten thousand operating centrifuges. Accordingly, a comprehensive agreement may well require both sides to reach an implicit consensus on what the actual purpose of Iran’s enrichment program is. For the P5+1, the only legitimate purpose is the facilitation of Iran’s civilian nuclear program. For the Iranians, however, a permanent domestic enrichment program represents a basic expression of their national right to enrich, a demonstration of Iran’s irreversible technological progress, and/or a hedge should it desire an eventual nuclear weapons capability down the road.

The second issue is the final disposition of the Arak facility. The P5+1 secured an important concession from Iran to halt all activity related to the Arak heavy reactor, including the production and testing of fuel assemblies. However, the CBM agreement says nothing on Arak’s final status in an end state. It is important to note that the international concerns over this facility do not revolve around the fact that Iran is constructing a reactor, but that it is to be moderated by heavy water, which facilitates the production of spent fuel more optimal for reprocessing into weapons grade plutonium. Accordingly, a final end state agreement could permit Iran to move forward with this facility but take measures to minimize its potential for plutonium production. One solution would be to convert Arak to a light water reactor, which significantly reduces its capability for plutonium production.

Finally, the length of the comprehensive agreement will be a contentious subject. As the Geneva text highlights, the duration of this agreement is to be defined. The text also notes that, once the agreement has reached its end date, “the Iranian nuclear program will be treated in the same manner as that of any non-nuclear weapon state party to the NPT.” That means, once the comprehensive agreement has expired, Iran will no longer be bound by any limits to its enrichment program so long as it abides by IAEA safeguards demonstrating that the program remains peaceful in nature. Accordingly, Iran would be free to construct a large-scale enrichment infrastructure giving it the option of a rapid breakout. Moreover, if Iran so wished, it could restart construction of a heavy water reactor, again so long as it abides by minimal IAEA transparency standards.

For this reason, it is in the interest of the P5+1 to make this comprehensive agreement last as long as possible, on the order of twenty or even thirty years. Iran will push for a shorter time frame. The final length of any end state agreement, and whether Iran’s regime can evolve in a more positive direction before the agreement expires, will be key in determining the ultimate success of a diplomatic solution to Iran’s nuclear program.

Jofi Joseph worked on US policy toward Iran’s nuclear program and participated in P5+1 negotiations with Iran as a director for nonproliferation on the White House national security staff from 2011 to 2013.