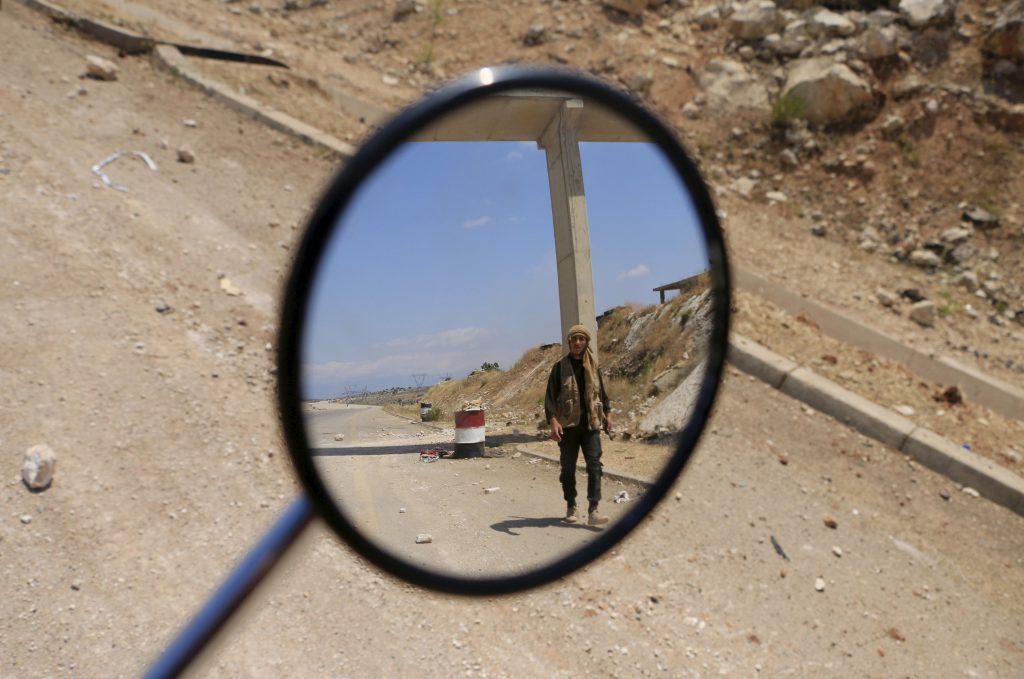 A Jund al-Aqsa fighter, part of a coalition of rebel groups called Jaish al-Fateh, is seen in a mirror as he walks near Psoncol town on a highway that connects Aleppo to Latakia, in the Idlib countryside, June 6. (Reuters/Mohamad Bayoush)

By deciding to quit frontline positions against the Islamic State of Iraq and al-Sham (ISIS) in northern Syria, al Qaeda-affiliate Nusra Front has made a US-Turkish agreement on establishing a safe zone in northern Syria more likely, says the Atlantic Council’s Faysal Itani.

If Nusra Front had stayed on in the region north of Aleppo it would have made it impossible for the United States to use airstrikes to create an ISIS-free zone as per an agreement with Turkey because “this would have been a safe zone for Nusra Front as well,” said Itani, a Resident Fellow in the Atlantic Council’s Rafik Hariri Center for the Middle East.

Faysal Itani spoke in an interview with the New Atlanticist’s Ashish Kumar Sen. Here are excerpts from our interview.

Q: What is the significance of Nusra Front’s statement? While it claims opposition to the US-Turkish plan to set up a safe zone, by leaving positions in northern Syria isn’t it clearing the way for the coalition to create such a zone?

Itani: It is less a question of active opposition to the safe zone as an unwillingness to participate in it, and the recognition that sabotaging it would be too costly. Opposition would put them into conflict with local groups who are on board and will enjoy US and Turkish protection. The idea of ceding the territory and exiting the landscape is not about them attempting to stop it, it is about them getting out of the way.

Q: What does Nusra Front stand to gain from giving up its frontline positions?

Itani: The Turks understand that for [the safe zone] to have any sort of utility we cannot have al Qaeda, a US-designated terrorist organization, on the ground in the areas we are trying to turn into a safe zone mostly because the Americans are a big part of this project.

Ahrar al-Sham is one of the most more powerful factions in northern Syria, if not the single-most powerful one, and it has very frequently acted as the check on Nusra Front. The Turks enjoy strong influence over Ahrar al-Sham. I can imagine a conversation taking place between Ahrar al-Sham and Nusra Front in which it was explained to the latter that it has to get out of northern Aleppo.

Northern Aleppo is not the only place Nusra Front is fighting, so its ability to be sure that neither the regime nor ISIS are going to make gains in northern Aleppo because of this safe zone allows Nusra Front to divert energies elsewhere to equally important frontlines, especially in Idlib province. In that sense Nusra Front can turn a bad situation into something good, but I don’t see Nusra Front portraying it this way. Instead, it is claiming to take a stand on principle, based on its refusal to support the coalition.

Q: On the other hand, Nusra Front has abducted US-trained rebels in Syria. Is it complicating the US-Turkish plan to create a safe zone north of Aleppo?

Itani: You need to distinguish, as Nusra Front does, between a group of people that have been trained and deployed by the United States to fight ISIS on the one hand, and the rebels who are fighting both ISIS and the regime and may receive some US support. One is a US project that is exclusively focused on ISIS. The other is some sort of convergence of interests and cooperation between the United States and local rebel groups that are fighting the regime and ISIS.

I can say with a pretty high degree of certainty that any attempt to build a US-led and US-trained force that fights ISIS exclusively will more or less be seriously compromised and resisted by a wide range of local rebel groups, not only Nusra Front.

Q: In which case, is it better to leave the fighting to rebel groups on the ground?

Itani: There are plenty of actors in northern Syria. At the end of the day, it comes down to whom the United States is willing to work with. I imagine there will not be a perfect overlap between that set and who the Turks identify as people they are willing to work with.

One of the main questions is, is the United States willing to work with Ahrar al-Sham, which is  a Salafi militant organization? I think not, but there certainly have been some influential voices arguing for it. Ahrar al-Sham itself has been arguing for it.

Q: Are the United States and Turkey in agreement on what role rebel groups based north of Aleppo, particularly the Nusra Front, al-Jabha al-Shamia, and Ahrar al-Sham, will play in a safe zone inside Syria?

Itani: I think Nusra Front will be a bit easier to agree on because it is not a Turkish allied group. I don’t think that, aside from certain Free Syrian Army brigades, the United States has the stomach for supporting other insurgents on the Islamist spectrum. That doesn’t mean that the United States is conditioning agreeing to a safe zone on Turkish withdrawal of support for these groups. The United States and Turkey can agree to disagree, within limits. However, I think Nusra Front falls outside those limits.

Interestingly, a US coalition airstrike [August 11] in Atmeh (in northern Syria) targeted Jaish e-Sunna, a group that is part of the Jaish al-Fateh coalition [a jihadist-led alliance that includes Nusra Front].  It is not clear to me why that group was targeted.

Q: What is the US view of Jaish al-Sunna?

Itani: It is not a US-designated terrorist organization. The group has put out a statement saying so. It’s not clear why the United States targeted it.

Q: And how does the US view Ahrar al-Sham, which is considered one of the more effective rebel groups in Syria?

Itani: It doesn’t  want to touch them, but they are not being treated as enemies. We do have contact with them and they are not a US-designated terrorist organization, but I would imagine supporting Ahrar al-Sham is not President Obama’s cup of tea.

Q: Where do you stand on Ahrar al-Sham?

Q: If Nusra Front were to leave frontline positions against ISIS, are other rebel groups in a position to hold the line against ISIS?

Itani: Probably, especially with the US Air Force and the Turkish air force overhead.

Q: How has Nusra Front fared in the war on ISIS?

Itani: Sometimes well, but they have also had disastrous setbacks such as last year they lost the remainder of Deir ez-Zour and Raqqa and they had to pull back west.

Q: How should the United States navigate this complicated battlefield on which some groups it doesn’t consider favorable are fighting ISIS and stand to gain from the US-led coalition’s operations?

Itani: Trying to decide who it is you can and can’t tolerate is part of the equation. Most importantly, you have to think on a micro level. You have to know what is this particular group’s standing, what does it want? It requires a lot more rigor than saying we don’t want to get involved in other people’s civil wars, we only want people who will fight ISIS, etc.

If we are worried about the secondary order effects of our air campaign and the possibility that it might benefit people we might not like, the best solution to this problem is to shape things in a way where the people we like benefit more and are better positioned to push back against the inevitable showdown they will face with their own competitors.

Q: Has the battlefield become messy beyond a point where it is difficult to weed out groups we can’t work with from those we can?

Itani: To the extent that you dedicate intelligence assets to it and you work with your regional allies, you can find out quite a lot. Everything? No. Truth is the first casualty of war.

We know quite a bit about the south because between us and the Jordanians we have an effective intelligence outreach and cooperation program with the southern insurgency [in Syria]. The north is less healthy because there are more Islamists and more extremists.

If we manage to convince the Turks that we will meet them halfway on their interests in Syria perhaps rather than have them as a facilitator or ignore jihadi groups they can be part of the pushback against them.

Q: Iran plans to present a Syria peace plan to the United Nations and there are also reports that Iran, along with Turkey, played a role in brokering a ceasefire in Zabadani. Is Iran taking a new approach to Syria?

Itani: The Zabadani ceasefire happened only because [Iranian-backed] Hezbollah was not able to take Zabadani and in the meanwhile the rebels were able to put very heavy pressure on Shia areas in Idlib. This was a tactical ceasefire because of a military stalemate that the Iranians didn’t foresee.

On Iran’s diplomatic marathon, I expect nothing. I don’t think this is a diplomatic question for the Iranians. The Iranians are fighting in Syria because they have a strategic asset called Hezbollah there and they need to preserve their posture. The only way they can preserve their posture is by having a regime that is friendly to Iran and friendly to Hezbollah. That is the Assad regime. Can there be another regime in Syria like that, but not Assad? I think that is very unlikely.