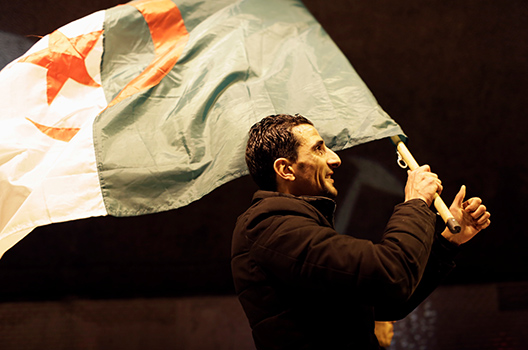 The continued protests and potential leadership change in Algeria do not constitute a “big popular revolt against the regime,” according to Karim Mezran, a resident senior fellow in the Atlantic Council’s Rafik Hariri Center for the Middle East, but rather “a de facto demand of change of personnel.” Algerian President Abdelaziz Bouteflika announced on March 11 that he would not be running for a fifth term as president, but also said that elections slated for April will be delayed.

Bouteflika has ruled the North African country since 1999 and the eighty-two-year-old has had few public appearances since a suffering a stroke in 2013. Frustrations with Bouteflika’s rule and economic conditions have spurred mass demonstrations in Algeria since the end of February.

Bouteflika’s March 11 statement claimed that he never intended to run for a fifth term, saying that he sees his “final duty to the Algerian people [as] contributing to the founding of a new republic as the framework for a new Algerian system.” Protestors took to the streets in the capital Algiers again on March 12, celebrating the promise of Bouteflika to not run again, but hesitant about the delaying of future elections, which could actually extend the rule of the incumbent president.

Atlantic Council Senior Fellow Karim Mezran discussed the latest developments in Algeria and the prospects for new leadership with the New Atlanticist’s David A. Wemer. Here are excerpts from the interview:

Q: President Bouteflika announced on March 11 that he would not seek a fifth term as president. What drove him to this decision?

Mezran: The pressure was coming from the street, from the massive demonstrations. But also, the military did not want to continue this level of confrontation that could lead the demonstrations to go out of hand. All it takes is for someone to shoot a demonstrator or a policeman, and it will get out of hand and the army would have to intervene. So pressure from inside [the regime] and then outside forced Bouteflika to give up running again.

But this does not mean that Bouteflika is out. He is still the president. Elections have been postponed. They are going to organize a national conference that is supposed to prepare for elections, to supposedly bring Algerians together. This is an attempt by the people around Bouteflika—Bouteflika is clearly incapacitated—to try to resist and stay in power or at least [maintain] the possibility to negotiate with other groups of the elite. It is just the first step. This is by no means the demise of the system or the collapse of the pouvoir [the Algerian elite]. It is nothing like that. It is just a change of personnel, so far.

Q: Bouteflika said in his announcement that he wants to see “a founding of a new republic.” How serious is this statement?

Mezran: It is lip service. There is no intention whatsoever from the elite to reform the state. They can’t, which leaves us with the bigger question: what could change? We don’t know because the system in Algeria is so opaque that it is hard to understand what it would take for the demonstrations to cease.

Q: Given the fact that Bouteflika has been medically incapacitated, why have the elites not changed leaders earlier, or given a signal about succession?

Mezran: So far the elites haven’t been able to find the right person [to succeed] because I think that the Bouteflika clan felt so strong that they did not have to negotiate with any other group. That is why  no alternative to Bouteflika was proposed. The other factions said they didn’t want anyone from Bouteflika’s entourage as the successor, but this led to a standoff. Now that the demonstrations have put down the ambitions of the Bouteflika clan, they might be more amenable to negotiations. We will see that unfolding in the next couple of weeks.

The idea that thanks to the demonstrations a more democratic system will be realized is pure fantasy. Yes, there could be a national conference, apparently inclusive. There could be a new constitution, or even new elections. But this is all a smoke screen. It is an intra-elite business. The elites will most probably appoint a deputy to Bouteflika so that once he dies, [the deputy] will become president, without any turmoil. But if [the elites] don’t get along, then it is going to be a different ballgame.

Q: Protests have been ongoing for weeks. What has been driving them? Opposition to Bouteflika’s attempt at a fifth term or something more?

Mezran: I think there is more. I think the people are really angry and frustrated by the de-facto paralysis of the political system. The issue of Bouteflika’s candidacy is in reality just the cherry on top of the cake. Most of the demonstrators would like to see a major change in the system. Nevertheless, I believe that other forces may have played a role in supporting the demonstrations. There are parts of the elites who unleashed the street to hit—as a last resort—the Bouteflika faction in power. The organization [of the demonstrations] is much more than a simple: “everyone go to the streets.” I don’t believe that there is a demonstrator’s elite, I think that it is part of the military and security establishment who are organizing them and who may be the ones who call the demonstrations back now that Bouteflika is officially out because they are also afraid that it could get out of hand. Once you incite the street, as Egypt [during the Arab Spring protests in 2011] teaches us, you know how it begins, but not how it ends.

Let’s not put too much faith or hope on these demonstrations. We are not seeing a big popular revolt against the regime. We are seeing a de facto demand of change of personnel. Which doesn’t mean it can’t become a revolution, but I think that would be very hard [to do].

Q: So far there has not been evidence of much crackdown by the military or security services against the demonstrations. Why is this?

Mezran: The Algerians learned. They didn’t previously have good police trained in crowd control. In the recent years, they have built such a force. Today, they could send such a force to face the demonstrations and not the army, as happened in the infamous 1988 protests. In that occasion, the intervention of the army to suppress popular protests ended up in a bloodbath with more than 800 people killed. So in today’s case, the security forces were shooting tear gas, but no real live ammunition.  The result was that whoever was behind the demonstrations obtained the result of creating pressure against Bouteflika and his clan but kept the situation relatively calm.

[The demonstrations] were peaceful; and for sure these are not the kind of demonstrations that could unravel the system, so far. But as I said before, it can easily go out of hand.

Q: What role might Algeria’s neighbors or European countries play in the developments in Algeria?

Mezran: With Algeria, I think everybody is aware that extreme caution needs to be used. Algeria is a very strong country and it might react very negatively to foreign interference. I think what is happening today is really an internal matter. Yes, the French or the Italians might take a position, but these are minimal. I personally don’t see anyone putting their fingers into Algeria.

Image: A man carries a national flag as he celebrates on the streets after President Abdelaziz Bouteflika announced he will not run for a fifth term, in Algiers, Algeria March 11, 2019. (REUTERS/Ramzi Boudina)