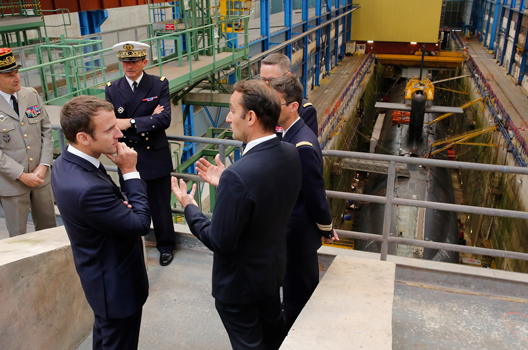 French President Emmanuel Macron listens to explanations in front of a nuclear submarine as part of his visit to the Ile Longue Defence unit, submarine navy base, in Crozon, near Brest, western France, July 4, 2017. (REUTERS/Stephane Mahe)

Lingering uncertainty regarding US support for NATO and burden-sharing among allies has raised questions as to the future of the NATO nuclear-sharing arrangement. While US President Donald J. Trump’s reaffirmation of the US commitment to Article 5, NATO’s mutual defense clause, may have temporarily placated allies, intense feelings of insecurity among the European allies remain. German Chancellor Angela Merkel, taking an unusually strong stance, gave voice to these sentiments: “The time in which [Europe] can rely fully on others—they are somewhat over.” With these remarks, Merkel offered her answer to a question that has been asked repeatedly since Trump was elected president of the United States: Can Europe count on its ally across the Atlantic to come to its defense when needed?

Of those who say “no,” some go so far as to call for a review of the European nuclear posture, which is rooted in the NATO nuclear-sharing arrangement and links European security to the US arsenal. Fearful that Trump might close the nuclear umbrella covering Europe, a small group of academics and politicians has revived the debate surrounding a European nuclear deterrent— otherwise referred to as “Eurodeterrent.” Shortly after the 2016 US presidential elections, Roderich Kiesewetter, a member of the German Bundestag, proposed that the United Kingdom and France place their nuclear weapons under joint European Union (EU) command, thereby renouncing sole control over them. Jaroslaw Kaczynski, a former prime minister of Poland and current chair of the Law and Justice Party, went one step further. In an interview with the Frankfurter Allgemeine Zeitung, a conservative German newspaper, he contended that the EU should become a nuclear superpower. Others, such as Thorsten Benner, head of the Global Public Policy Institute in Berlin, argue that Germany should acquire nuclear capabilities of its own.

To be clear, a scenario in which the United States withdraws its nuclear weapons from Europe is highly unlikely. Trump’s protectionist and isolationist policies may have widened the diplomatic rift between the two continents but the Alliance itself is not in any tangible danger. After all, Trump has endorsed Article 5—albeit much too late and in a less-than-ideal fashion. Beyond that, the Trump administration contains strong supporters of NATO. US Secretary of State Rex Tillerson, US Secretary of Defense James Mattis and US National Security Advisor H.R. McMaster, all of whom understand the value of the Alliance, including its nuclear-sharing arrangement, are there to guide Trump through his developing relationship with other NATO nations.

However, we live in a time defined by uncertainty. Ideas once held as indisputable truths—be it the viability of the Alliance or the European project itself—are now being challenged by a myriad of internal and external forces, including the United States. This means that non-nuclear European states must remain mindful of a reality in which they may not be able to rely on the NATO nuclear deterrent. Given a resurgent Russia and the shifting security landscape at large, Europe cannot afford to be without a plan.

Yet, it is important to frame this conversation in a cautious and nuanced way. With the suggestion that Germany build the bomb and Europe undergo nuclear rearmament, the current debate has taken an alarming turn. Should the worst come to pass and the United States closes the nuclear umbrella covering Europe by refusing to defend its allies with nuclear capabilities, European leaders should not have to choose between deterring nuclear-armed adversaries and NATO’s shared values of restraint, rule of law, and weapons of mass destruction (WMD) non-proliferation. A European nuclear deterrent is reconcilable with European commitments to international law (most importantly with the Treaty on the Non-Proliferation of Nuclear Weapons).

In this alternative future, France, one of two nuclear-weapon states (NWS) in Europe, would replace the United States as the supplier in the nuclear-sharing arrangement. Depending on whether this arrangement would be sustained under the EU Common Security and Defense Policy or within NATO, the United Kingdom, which plans to leave the European Union, could opt in as well. France would pledge to use its warheads to defend its European allies against a nuclear strike. However, it would retain ultimate command over its own weapon systems.

Some, such as social scientist Maximilian Terhalle, are worried that France’s arsenal, comprising almost 300 warheads, is too small to deter Russia—and justifiably so. Nonetheless, nuclear deterrence is not a numbers game. Deterrence is psychological and exists in the mind of the adversary. To be deterred, Russia must believe that a nuclear attack will be retaliated against and will come at an unacceptable strategic and human cost. Hence, France and the countries under its umbrella should focus on developing survivable delivery capabilities that can penetrate Russia’s sophisticated anti-access/area denial (A2AD) network, such as air-launched cruise missiles (ALCMs). Effectiveness, reliability, and readiness should be prioritized.

With this arrangement, the destabilizing effects of a sudden loss of deterrence would be negated while complying with international law. Since a scenario in which France assumes the role of the nuclear supplier does not have to involve a transfer of command or weapons, the provisions of the Non-Proliferation Treaty (NPT) would not be violated. Said plan would also disincentivize individual member states from turning nuclear by calming fears of vulnerability and serving as an insurance policy. Additionally, since the United States would be removing its weapons from military bases across Europe, the total number of warheads stationed on the continent would decrease, underlining Europe’s commitment to eventual disarmament.

That is not to say that this program would not face enormous hurdles. The European public takes a strong stance against nuclear weapons; many are critical of US warheads currently positioned in Europe. Moreover, even under the leadership of French President Emmanuel Macron, it would be difficult to secure the approval of the French parliament. To this day, France has refused to commit any of its nuclear capabilities to the Alliance, citing concerns over sovereignty. Perhaps the greatest challenge would be convincing Russia and other hostile NWSs of the credibility of France’s commitment.

Other issues European decision-makers would have to grapple with before this arrangement could take shape include bolstering the agreement against regime changes and reaching a consensus on the question of a no-first-use policy—the promise to refrain from using nuclear weapons unless fired upon first. Furthermore, European leaders would have to decide who would finance the much-needed modernization of the French arsenal. They would also have to determine whether it is necessary to build tactical warheads to counter limited nuclear strikes, the cornerstone of Russia’s “escalate to de-escalate” doctrine, in a proportionate manner.

For now, Europe should focus on preserving the status quo, doing its part to strengthen the transatlantic alliance, and keeping the door open for the United States. Staying under the US nuclear umbrella and within the NATO nuclear-sharing arrangement is preferable to any other option. Nonetheless, European leaders should not make the mistake of dismissing this scenario and should be prepared to respond if, and when, the time comes.

Alexandra Marksteiner is an intern at the Atlantic Council’s Transatlantic Security Initiative. You can follow her on Twitter @AlexMarksteiner.