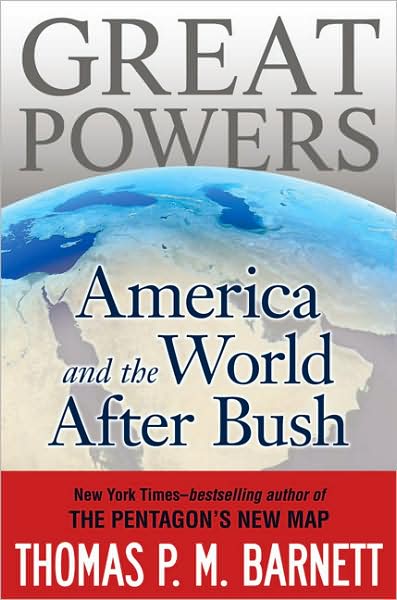 On Barack Obama’s second day in office, the Bush administration is fast fading into memory.   As accidental tax evader Timothy Geithner prepares to take over at Treasury in an administration where transparency and the rule of law will be touchstones, it’s an excellent time to begin looking at the global economy.

To do that, we’ll once again turn to Thomas Barnett‘s forthcoming book Great Powers: America and the World After Bush.  I’ll attempt to weave a unified thread out of Chapter 4, The Economic Realignment: Racing to the Bottom of the Pyramid; Chapter 7, The Network Realignment: The Rise of the SysAdmin-Industrial Complex; and Chapter 8, The Strategic Realignment: Resurrecting the Progressive Agenda.

America is being replaced as "the global demand" center by rising powers India and China. This means that we’re no longer the only agenda setters.  This is "the price of our success in projecting the American System globally."  China’s economic growth is the key factor in the global economy and the rise of the BRIC quartet (Brazil, Russia, India, and China) and smaller emerging powers means "3 billion new capitalists who joined globalization over the past quarter century."

Yes, China is cutting corners and breaking some rules.  That’s what emerging economies do.  Barnett finds irony in the West, particularly the United States, demanding that these countries conform to rules that we ourselves "embraced only after becoming a supremely competitive global economic power."  Further, there is plenty of incentive for China and others to be more transparent than we were in a similar stage of development —  and the Beijing Olympics pushed them further in that direction, suddenly seeing the need to "crack down on piracy of video coverage that they had sold to foreign broadcasters."

It’s worth noting that our population of 300 million still manages to match the combined economic power of 2 billion people.  Moreover, the statistics are misleading because American companies "dominate China’s U.S.-export sector, meaning it’s basically our companies renting Chinese labor and keeping much of the profit."  Further, "Blessed with too many people, China is short on just about everything else: arable land, water, energy, and raw materials of all sorts."  This results in China and India being "awfully dependent on a lot of unstable countries without having the global military footprint of a great power."

Ultimately, there’s not much substitute for American leadership in bringing the Bottom Billion into the global economy.  The World Bank recently calculated that China’s purchasing power was forty percent less than we thought, so "China won’t be overtaking the American economy any time soon."  Nor do they have a grand strategy for global leadership.  For a variety of reasons, Europe can’t and won’t do it, either.

While America must lead the effort, it’s going to be Asia doing the heavy lifting on the ground.  Chinese and Indian entrepreneurs are simply more used to investing in places with bad infrastructure, weak governments, and inhospitable climates.   So, our job is to get out of their way and let them — which includes not hectoring them too much on issues such as Darfur.

One key problem that must be addressed is what William Easterly calls "artificial states" — polities with no natural borders created out of convenience by colonial masters generations ago.   Most of these states are in Central Asia and interior Africa.   There should be, for example, zero states in Africa without either a coastline or a generous complement of natural resources.

Oddly, Barnett does not prescribe redrawing maps.   Rather, he says great powers must be prepared to "intervene military to prevent or tamp down ethnic conflict," undertake "comprehensive efforts to stabilize the affected regions economically," and "steer all players toward toward the long-term goal of political reintegration."

Worrywarts like Nassim Taleb (The Black Swan) and John Robb (Global Guerrillas, Brave New War) focus on the dark side of global networks — their vulnerability to exploitation by bad actors. While they make good points, though, they’re missing the forest for the trees. Terrorists and hackers are relative nuisances compared to the overwhelming good that globalization and modern technology provide.

Further, the systems that they manipulate contain the seeds of their destruction. So, yes, the global food chain is subject to sabotage. This is nothing new — and the "threat pales in comparison to what human mistakes and greed cost us every year in tainted products" — but the scale has changed. But the sciences of nanotechnology, biometrics, and genetics will solve this problem — ironically, in response to the scary but relatively small threat — and make our food safer than ever from both malicious tampering and human error.

It’s human nature for us to respond to crises by retrenching to traditional and time-honored stances. But it’s a mistake to get carried away. For example, while global warming and the threat of running out of oil are potentially serious problems, it’s not worth spending enormous resources on them right now when so many near-term and more-easily-solvable problems (lack of clean water, malnutrition, disease, e.g.) confront us.

Similarly, it would be an epic mistake to panic at the threats to our livelihood posed by immigration and global competition. Indeed, Americans should be thankful that we have a ready source of young labor to keep our economy and social welfare system going, unlike our counterparts in Western Europe and Japan.

Tomorrow, we’ll conclude the series with some analysis of the book’s key arguments and an interview with the author.