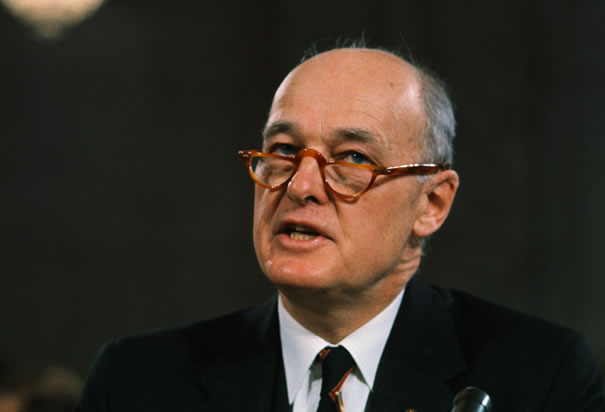 US strategist George F. Kennan, a hero of mine, once said, “The best an American can look forward to is the lonely pleasure of one who stands at long last on a chilly and inhospitable mountaintop where few have been before, where few can follow and where few will consent to believe he has been”.

This is an election town at an election moment.  For a foreigner it is a fascinating and frankly uplifting experience to see American democracy in action.  Still, having watched last week’s presidential debate between Obama and Romney from ‘over there’ and last night’s vice-presidential debate between Joe Biden and Paul Ryan from ‘over here’ I am struck by how poorly all the candidates really understand the fundamental principles of American foreign policy that Kennan helped establish.

My reason for being here in DC is to attend a high-level round-table on current and emerging threats and adversaries.  Whoever takes the White House next month will face a world that is both complex and potentially dangerous, although not yet a world that is committed to a road to war and disaster.  Watching the debate here I am struck by the same doubt as one finds in Europe, albeit with an American accent. The economy is struggling; few of America’s recent foreign ventures can be called a success. As in Europe, I see too many powerful Americans lying to themselves and to their people about the challenges that lay ahead.

In 1946 Kennan wrote a telegram from Moscow that at a stroke re-connected American leadership with strategic reality.  Kennan (with the help of Winston Churchill) ended Washington’s delusion that Stalin’s Soviet Union could ever be a partner in the post-World War Two world that Franklin Delano Roosevelt had envisioned prior to his 1945 death.  The Soviets were rapacious occupiers who for many central and eastern Europeans simply replaced one dictatorship with another.

Today there is no Soviet Union but nor are China, Russia, or Iran ever going to be strategic partners given their governments and systems of government.  China is locked in an internal power struggle within the Communist Party and between the Party and the People’s Liberation Army that has led it into conflict with ALL of its major Asian neighbors.  Moscow is run by a paranoid, illiberal, nationalist elite that still has ambitions to re-establish its hawkish sphere of influence in Europe and beyond should the West continue to falter.  The Arab Spring (or whatever one might call it) may lead to some flawed Muslim Brotherhood-type democracy (one man, one vote, one time?) but it is clear that Al Qaeda sees it as much as an opportunity for a future caliphate.  And then there is Afghanistan; America will need to be there in strength way beyond 2014 and completely renovate its strategy therein if a future president is to ever declare success, and pay the price in lives and geld that will demand.

The thing about Kennan was not that he espoused an overly hostile anti-Soviet policy. He did not. Rather, he helped lead led the way to the creation of an American statecraft which represented a profound break from the isolationism of its peacetime past.  By so doing America established a strategic concept and culture for American leadership that in time won the Cold War.  America led not only because it could, but because it had to.

Coming to Washington as I have over many years I have watched the hollowing out of American leadership.  Sometimes it has been masked by American bombast; sometimes by moments of excessive modesty (yes it does happen).  It has happened because American leaders have abandoned the principles of American leadership and the deep belief in the values and indeed the interests’ American success and world peace is built on.

International ‘relations’ are called as such because they are indeed just like relationships. It is not just about treaties, meetings, and diplomats.  It is about power and the instinctive understanding of friend and foe alike of both one’s ability to realize one’s interests and whether one really believes one can.  My own country, Britain, is declining fast not because Britain is no longer capable of greatness; it is.  It is declining because the elite have lied so long to themselves and the British people that they no longer know what to believe in.

The point about America is that after a bruising decade it must now decide whether to be lonely and lead or popular and decline.  I suspect there is not much ground between the two and that Americans haven’t long to decide.

This election may well be the moment the long and painful decline from the America’s lonely mountain-top really begins.