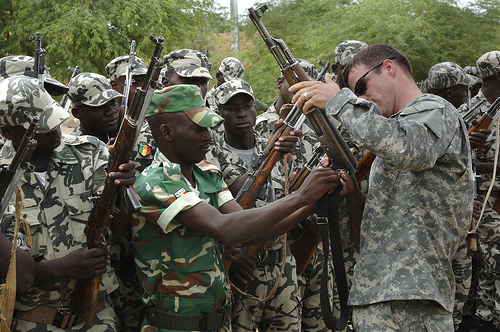 Why on earth is the United States thinking of setting up drone bases around the African country of Mali when French forces seem to have the situation well in hand? In this instance, American leadership is not just unnecessary but also unwise. Especially when the U.S. record of helping Mali protect its security has already backfired spectacularly.

In the wake of 9/11, elite soldiers of the Malian army were trained and equipped by U.S. Special Forces under a $520-$600 million program run by the U.S. Africa Command, or AFRICOM. The idea was to give Mali the resources and skills to defend itself against Islamic insurgents that were spilling into the vast deserts of North Africa. Alas, in spite of years of U.S. efforts, when the rubber hit the road, most of the soldiers decamped to the insurgent side, taking their American arms and training with them.

Facing the Malians were battle-hardened Tuareg-warriors, a fierce nomadic people from Northern Mali that Col. Gaddafi used as mercenaries to fight his opposition in Libya. When Gaddafi knew his days were numbered he opened his armories to anyone who wanted Libyan weaponry that had been acquired over a decade. A cunning plot to make Libya and the surrounding states toxic for years to come.

The Tuaregs, who had never been happy with the elected government of Mali, helped themselves to Gaddafi’s weapons and vehicles, joined forces with other insurgent groups, and moved into Northern Mali. There they defeated the Malian troops sent to stop them and set up shop, claiming to have begun the building an independent Islamic State.

Then last March, Captain Amadou Sonogo, leader of the elite U.S. trained Malian unit, decided enough was enough and overthrew the Malian government. The coup ended the U.S. training program. After all, Americans could not be seen advising a military junta that had overthrown an elected government.

In one fell swoop the United States lost its influence, its investment and its prestige in Mali. The way was now open for the Tuareg/Islamist insurgents to move south in a bid to take over Bamako, the Malian Capital, and then Mali itself. A move that appeared headed for success until France decided to intervene by force.

As French forces rapidly destroyed the insurgents they wisely used Malian soldiers, many of them remnants of the group trained by the United States, to consolidate their victories. The French are tough skinned about such prevarications, but as the Malian forces occupied liberated villages and towns they also settled scores by murdering anyone suspected of being a Tuareg. In a remarkably candid observation U.S. General Carter Ham, commander of AFRICOM, was quoted by the BBC as saying:

“… Malian troops were given plenty of tactical training, but not enough ethics training. We were focusing our training almost exclusively on tactical or technical matters. We didn’t spend probably the requisite time focusing on values, ethics and a military ethos… “

Africa has not proven to be a welcoming continent for America’s “global war against terror.” There is suspicion among Africans of America’s real aims in that continent. Is the African version of the “war against terror” really a pseudonym for competing with China for African natural resources such as Uranium and rare-earths, Africans wonder?

That suspicion of U.S. aims explains why no African country has wanted to host the headquarters of AFRICOM that was set up in 2007. So, AFRICOM is headquartered in Stuttgart Germany, thousands of miles from its theater of responsibility.

France (and the European Union) will shortly be engaged in rebuilding Mali, a country twice the size of Texas. Does the U.S. really want to join in another nation-building exercise, in a Muslim country, on a continent where Americans are not welcome?

To be seen as leading in every nook and cranny of the world has not been good for America’s foreign policy, its reputation, or its wallet. Let’s continue to give France the logistical help it needs, but for heaven’s sake let’s stay out of Africa.