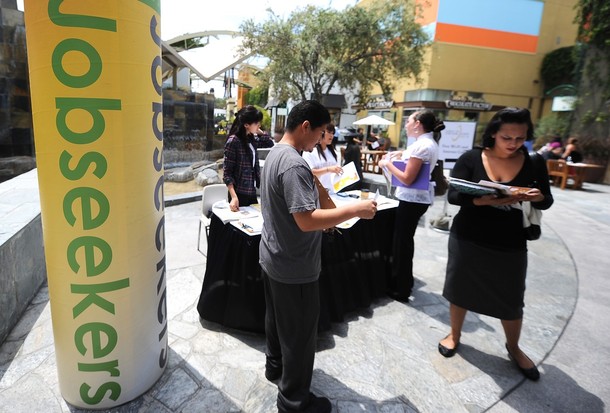 No better proof of a dysfunctional — and broke — system of government than the U.S. Congress passing additional funding for the Afghan war — $300 billion thus far — while simultaneously denying the unemployed an extension of benefits — and then taking a 10-day Independence Day vacation.

With the jobless hovering just less than 10 percent of a 158 million-strong U.S. labor force, including 1.3 million who didn’t get their benefits reinstated and an additional 200,000 a week who have been without a job for at least six months and stand to lose their benefits each week until Congress acts, some 15 million Americans are out of work.

One million Americans dropped out of the job market over the past two months as they gave up a fruitless search for work. They lack the skills needed for a high-tech economy. And companies have slashed payrolls as automation helps them get along with fewer employees. The ranks of the unemployed who no longer receive any compensation are climbing to 10 million.

The headline in Britain’s conservative Daily Telegraph read, "With the U.S. trapped in depression, this really is starting to feel like 1932." And for those who do find jobs, the search averaged 35.2 weeks.

Ambrose Evans-Pritchard’s story reported "California tightening faster than Greece," as 200,000 state workers were reduced to the minimum wage of $7.25 an hour to cover a state deficit of $19 billion. Illinois, with a deficit of $12 billion, owes $5 billion to its schools, nursing homes, child-care centers and prisons.

Europe, in America’s foot tracks, is looking anemic and a double-dip recession for 2011 is the new consensus.

The friendly neighbor to the north is perplexed and disturbed as it watched, said The Globe and Mail, "the most gifted president in several generations" with a majority in both houses, only to be swamped "by the doleful legacy of the Bush years, a worldwide recession and its parlous aftermath and a ferocious Republican opposition bent on a search-and-destroy mission of his presidency."

To make matters worse, says The Globe and Mail’s Jeffrey Simpson, "the war in Afghanistan, into which President (Barack) Obama has poured thousands of additional soldiers and billions of borrowed dollars, is going poorly. As The Economist belatedly recognized this week, ‘America and its allies are losing in Afghanistan.’"

It’s now up to U.S. Army Gen. David Petraeus to "somehow salvage something from the Afghan mess, at a time when Americans are growing increasingly weary of that war, now in its ninth year."

One of only five out of 44 nations authorized to engage in kinetic operations, the Canadians lost 150 killed, most of them by improvised explosive devices, and Parliament ordered the return of its 2,500 troops next year.

The Globe and Mail echoed the widespread sentiment among Afghan cognoscenti at NATO headquarters in Brussels, in Pakistani military circles and in the U.S. Congress, that the best the United States and its allies "might hope for is to inflict sufficient damage on the Taliban in the next year that some insurgents might be inclined to negotiate inclusion in an Afghan government. To say that this is a long shot understates the odds."

The Pakistani military, with the approval of President Asif Ali Zardari and the government, are keeping lines open to some of the groups in the Taliban coalition and to President Hamid Karzai in Kabul. The Pakistanis remain convinced that the United States won’t stay the course for another five to 10 years, the estimated time required to prevail over the nationwide Taliban insurgency.

The deadline for the beginning of a U.S. withdrawal next summer, set by Obama, is the evidence cited on both sides of the Atlantic, and in both Pakistan and Afghanistan, for what is seen as Washington’s quixotic resolve. Can the United States really stretch gargantuan borrowing requirements into an indefinite future without collapsing the dollar? Can anyone change the Afghan equation in favor of the United States and its allies before the harsh winter freezes operations until next spring?

No one knows as much about the history of insurgencies since World War II than Petraeus. Following his victorious surge in Iraq, he is best qualified and equipped to pull it off. But he needs a minimum of three to five years. Obama needs dramatic results for his re-election campaign by the spring of 2012.

There’s no Ladbrokes betting on Afghanistan. But important questions are yet to be answered. How does Afghan nation-building benefit the U.S. economy and its security? Are we less or more vulnerable to another 9/11? Is al-Qaida less or more of a threat? There is no question both Iraq and Afghanistan have weakened America’s economy. And al-Qaida, with its multiple Web sites, has radicalized Muslim youth from Mindanao in the Philippines to Meknes in Morocco.

The estimated average of $1 million a day ($365 million a year) taken out of Afghanistan legally on the four daily Kabul-Dubai flights by civilian workers, most of them American, is the kind of war profiteering that can only hurt the allies — and benefit the enemy.