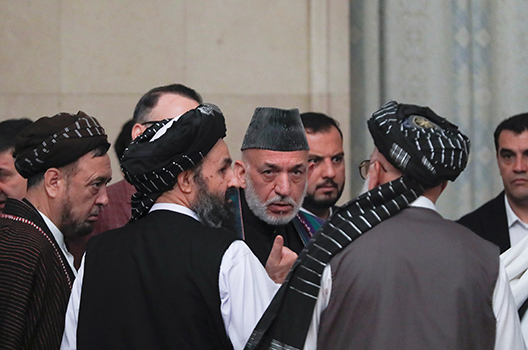 A gathering of more than sixty Afghans in Qatar this week provided a rare opportunity for frank discussion on the open questions facing a society still gripped in a decades-long conflict. A group of Kabul-based political, civil society, and government-endorsed representatives sat across from more than a dozen Taliban political officers, in a wrenching exchange of grievances, hopes, and fears about a slew of long-standing and contentious issues.

US Special Representative for Afghanistan Reconciliation Zalmay Khalilzad called the meeting “an important step” and “an essential element of the four-part peace framework,” which aims to produce counterterrorism assurances from the Taliban, the withdrawal of foreign troops, intra-Afghan negotiations, and eventually an agreement on a permanent and comprehensive ceasefire.

The intra-Afghan talks hosted in Qatar, with assistance from the German government, follow two forums in Moscow since last year where Afghan government officials were not present. The Qatar meeting was held as talks between the United States and the Taliban are accelerating and have opened the possibility of more discussions leading to formal negotiations, an important development given impending elections in both Afghanistan and the United States.

The frank conversations between the Afghan representatives also laid bare the country’s decades-long wounds and contrasting positions on a host of policies and values. To attain a viable and inclusive political settlement and a responsible end to conflict, these differences will need further hashing out as part of a nascent political roadmap, which achieves consensus within Afghanistan and among key international stakeholders. The steps towards this goal will need to be carefully timed and sequenced to ensure success.

Participants in Qatar reached tacit understanding on some issues, expressed disagreements over others, and drew red lines on some key components of an emerging political framework that will require both intra-Afghan and multilateral dialogues, perhaps including expert international mediation.

The delegates, who had agreed to take part in a personal capacity as part of pre-approved criteria, saw eye to eye on the need to end the war, seek a political resolution to the conflict, and reduce the level of violence, especially the targeting of civilians and nonmilitary installations. The Taliban, however, refused to consider a temporary or permanent ceasefire. While the Taliban view a ceasefire as a future goal for US-Taliban-Afghan government talks, many in Kabul consider it as a confidence-building measure that needs to be adopted whenever possible.

Furthermore, the Taliban rhetorically supported a set of principles on social and political inclusion, the Islamic nature of governance, and women and minority rights, but did not venture into specifics nor adhere to international legal obligations at this stage. A credible political settlement will need many of these key concerns clearly resolved prior to final agreement.

Many of the other important unresolved issues were raised by various participants but were avoided for the time being:

The future design of the constitution, government structure, security services, and potential political power sharing: The Taliban prefers to postpone these decisions until after a peace deal with the United States and the formation of an interim period. Khalilzad, on the other hand, has reiterated on several occasions Washington’s desire to resolve these questions before a final settlement. In his words, “nothing is agreed until everything is agreed.”

Democracy items, including freedom of speech and scheduled elections: The Taliban remained noncommittal as they have previously opposed taking part in presidential elections set for September 28. Current Afghan President Ashraf Ghani and some Afghan politicians insist on holding elections, while other political actors prioritize peace over elections. While many Afghans question the integrity of the electoral system, some have proposed deep electoral reforms while pursuing a mutually complementary election and peace process. Wide-ranging internal and external consultations on timing and elements of a political roadmap over the next few weeks will play a decisive role in determining the next steps.

Arguments over legitimacy: The Taliban rejects calls for engaging in formal dialogue with the current Afghan government. Despite Kabul’s overtures, the Taliban are more concerned about their own international standing. The next phase of talks on an Afghan political roadmap, a comprehensive ceasefire, and the withdrawal of foreign military forces will need either a formal transitional setup or includes the government in Kabul—either the current one or a new one if the peace deal and transitional period are delayed in favor of credible and fair elections.

Foreign military forces: Not only did the Taliban not want at this juncture to discuss a potential timetable for the withdrawal of foreign forces with other Afghans, but some claim that they were reticent to discuss their commitment to the international community to combat terrorism and deny terrorists safe havens in Afghanistan. Some reports indicate that US-Taliban talks on these two topics have yielded results, although the Taliban is insisting on a nine-month withdrawal timeframe, while Washington prefers a longer window stretching to almost two years. The Taliban strategy is to bundle and finalize these two items with the United States, before proceeding to other issues, which would maximize its leverage to shape the outcome of a political roadmap.

Islam: Aside from providing clichés about the role of Islam in all spheres of public and private life, the discussants left the door open for further expert discussions to address religious interpretation leading to a consensus, much to the displeasure of the Taliban representatives.

Opening the knots and tying in the next steps

Now that many of the critical issues are on the table and almost all relevant sides—domestic as well as external—are engaged in one form or another, the focus will need to shift to securing agreements on each of the four steps in the peace framework. Khalilzad alluded that a final agreement could be put to a binding decision-making conference to secure a broad-based Afghan commitment and international endorsement.

While in Kabul last month, US Secretary of State Mike Pompeo said the United States wants a peace deal by early September, before the Afghan presidential election planned for the end of that month.

Many questions are outstanding, among them: Are the Taliban ready to make the transition to mainstream politics? Can a US-Taliban peace deal be finalized and what are the consequences if it is treated separate from the other political settlement elements? What can be accomplished within the existing timeframes given all the issues that still need to be addressed? If not achievable or partially accomplished, what are alternative approaches regarding elections, an Afghan political roadmap, and conflict de-escalation?

Given the time constraints and political pressures in several capitals, a larger window of opportunity has opened up after the Qatar gathering, but future steps will require more clarity, accelerated diplomatic efforts to bring all stakeholders onboard, focused intra-Afghan consultations, expert mediation, consensus and trust-building measures, all-around flexibility, political acumen, and responsible strategizing.  There is an historic opportunity to move in the direction of a durable peace and a credible political settlement, but all sides must move quickly, responsibly, and decisively.

Omar Samad is a non-resident senior fellow at the Atlantic Council. He is also a consultant and former Afghan Ambassador to France and Canada, senior government advisor and Foreign Ministry Spokesperson.