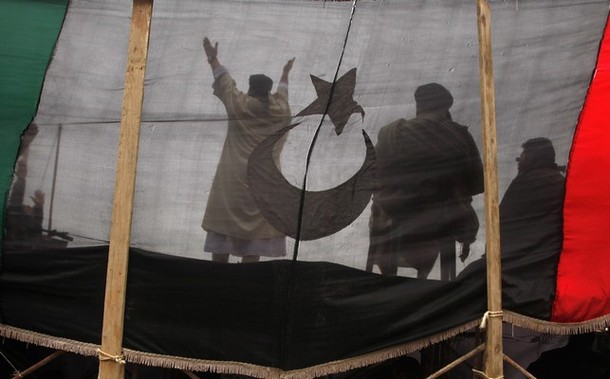 “What is to be done?” The famous words of Lenin echo during revolutionary moments like the one now taking place across the Middle East.

To the chagrin of many commentators, leaders of the United States and most of Europe have reacted with caution, even passivity, to the dramatic events of what is already being called the Arab revolution. Yet caution, care and prudence during times of crisis when thousands of lives are at stake make good sense.

There is little that outside powers can do directly to determine the course of events, as other commentators have already pointed out. The revolutions, whether they succeed or fail, belong to the revolutionaries on the ground.

But there is much that outsiders can be doing besides watching, waiting and hoping for the best out loud and in private. No, this doesn’t mean bombing Tripoli tomorrow. Instead, the leading powers of the world, starting with the United States, should be thinking seriously and constructively about the days, months and years after the current upheaval. They should be preparing themselves for the best and the worst scenarios to come, and all those conceivably in between. For no matter how much or how little leverage they have over the daily course of events, everyone’s interests will be affected by them for many years to come.

Soon after Hosni Mubarak’s fall, it was reported that the Obama administration had accelerated plans to assist his successors with a wide range of political and economic programs. This is a step in the right direction. But the effort must be much bolder, much bigger, and much braver than the usual patchwork of bilateral development projects.

The moment calls for nothing short of Condoleezza Rice’s oft-repeated “generational commitment” to the “transformation” of a vast and vital region. If the United States and its friends and allies were ever serious about such rhetoric, the time has come at last to demonstrate it. They too, may soon realize that this is not a commitment of choice but one of necessity.

Over recent decades, especially during the 1990s, the “Marshall Plan” epithet became badly overused, having been applied to nearly every worthy cause from vaccinations to disaster relief. If any moment calls for this kind of planning and action, this is it.

The original Marshall Plan lasted a little over three years and spent nearly $13 billion across Western Europe. But it lived on for decades, not only in the minds of its beneficiaries, who entered one of the greatest periods of prosperity in their history, but also in the precedents it set for political, economic and institutional cooperation among former adversaries; for strong market economies; and for democratic government.

The Plan’s genius – and the reason it is regarded as one of the most impressive policy successes of the 20th century – was not simply found in the largesse it provided to Western Europe during a moment of dire need. It also came from the rigorously deferential stance it took toward those it served. The Plan made it clear from the start that the U.S. would provide the support but Europeans would decide how and where it was allocated, and would issue the lion’s share of policy rulings – and bear the risk – as each particular local case demanded.

American administrators were present, to be sure, but well in the background. At the same time, however, the Plan rested upon powerfully and shrewdly interwoven domestic constituencies in every recipient country as well as back in the United States. And it drew to public service some of the best and brightest minds who showed – however much these attributes were later vilified – that the multiplier effects of successful policy entrepreneurship could last generations.

Thus the plan was a partnership in every sense: economic, political and institutional. Far more than helping to solve the fiscal needs of a politically ravaged continent, it underwrote the dignity, responsibility, authority and, most of all, the initiative, of Europeans to determine their future with pride and confidence.

The remarkably brave Arabs who have succeeded – and may or may not succeed in the coming weeks – in standing up to ruthless and vastly more powerful regimes deserve nothing less. They are not likely to appreciate hearing orders or even advice from anyone for some time to come, least of all from paternalistic outsiders.

Nevertheless, they desperately need support. The U.S. alone gives about $15 billion annually to the region, including military aid; an equivalent Marshall Plan today would amount to about $120 billion, and much more than that if measured as a percentage of GDP. But numbers per se matter less than the plan’s nature and design. Today’s Middle East is very different from postwar Europe, with different needs, configurations and ideas. That is why the tone and texture of any support is essential to get right. It needs deliberate, careful, precise planning with local partners. Now.

Skeptics will point to the strained resources of the West, especially the United States, which was once depicted—following World War II, especially—as king of the world. No longer, the skeptics say. Not least in a region where so many American missteps jar in recent memory.

Yes, the times are different. But skeptics forget that the immediate post-WWII period saw the biggest resurgence of isolationism (along with a harsh recession) in the United States since the 1930s. The Marshall Plan was a tough sell in the then Republican Congress. It was probably no less controversial than anything similar would be now. Yet it was done.

There is potentially generous support around the world for such a program today. Not only the European Union but also China, India, Japan and others should be enlisted in an Arab plan. The diplomacy and politics of course will be extremely difficult. They will bring frustration and disappointment. They will require tremendous leadership and persistence. But the stakes are too high, and the alternatives too bleak, to let this necessity pass.

Kenneth Weisbrode is a historian at the European University Institute and author of "The Atlantic Century." This article originally appeared in the Diplomatic Courier. Photo credit: Reuters Pictures.