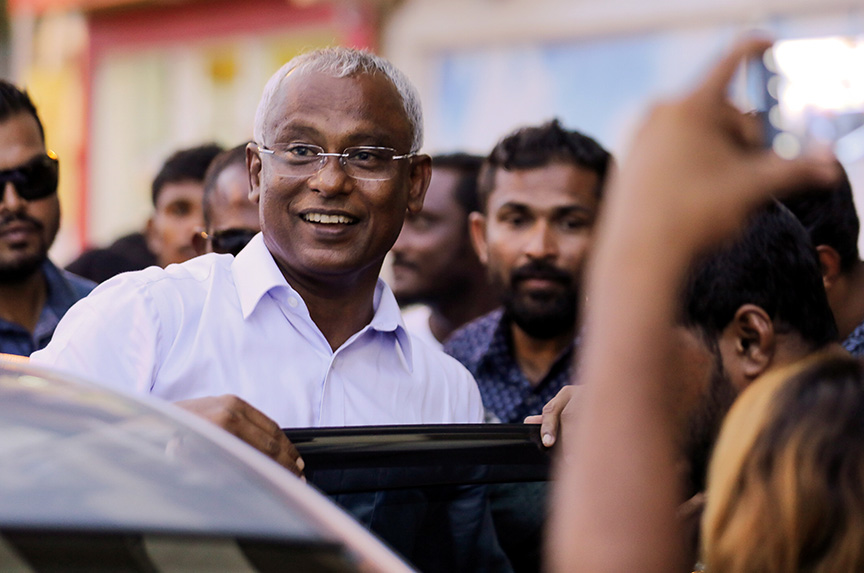 Over the past five years, the Maldives steadily transitioned from democratic to authoritarian rule under President Abdulla Yameen. Despite all odds, the opposition Maldivian Democratic Party (MDP) achieved a stunning electoral victory on September 23 that provides the Indian Ocean nation with an opportunity to reverse the erosion of rights and freedoms that occurred during Yameen’s tenure. The new government must now secure the loyalty of its institutions, including political factions within the MDP and the military, to ensure a peaceful and stable transition of power from Yameen to President-elect Ibrahim Mohamed Solih and his new ruling coalition in November.

The Maldives’ authoritarian trajectory has changed in a dramatic and unexpected fashion with Solih’s victory. In an election marred by allegations of suppression and fraud by the government, voters delivered a clear rebuke to Yameen and the incumbent government by coming out in historic numbers. The MDP received a clear mandate with a victory margin of 16.7 percent.

The repercussions of the election will reverberate across the Indo-Pacific. India and China have competed for influence in the Maldives for much of the past decade. Relations with India have been largely neglected during Yameen’s tenure even as ties have grown with China. Under Yameen’s government, the Maldives signed a free trade agreement with Beijing, leased several small islands for Chinese use, and invited substantial infrastructure investment. His defeat is a major setback for Chinese ambitions in the region and an opportunity for India.

It also serves as a boon for democracy in Asia. In his remarks to the US Chamber of Commerce in July, Secretary of State Mike Pompeo articulated the Trump administration’s vision of a Free and Open Indo-Pacific committed to “deepen[ing] commercial, government, people-to-people ties—all based on our shared democratic values.” Solih’s victory offers the Maldives an opportunity to work toward attaining that vision.

While the MDP’s victory is significant, much work will be required to reverse the damage done to the Maldives’ institutions. A return to democratic norms is far from assured. Attention must now turn to ensuring a peaceful and stable transfer of power, free of external influence.

The MDP’s first major challenge will be to ensure that Yameen steps down at the end of his term on November 17. Both the United States and India have publicly acknowledged and congratulated the president-elect on his electoral victory. It is now up to the MDP to continue to maintain and grow ties with its international partners to deter any attempts by the outgoing government to subvert the transition of power.

Yameen has exhibited a penchant for authoritarianism. Under his leadership, the Maldives’ government repeatedly undermined democratic institutions and subverted the rule of law, jailing and exiling prominent political opposition figures and silencing critical press.

Recent developments suggest that Yameen will not concede power willingly. While he publicly conceded defeat following the election, Yameen’s party has contested the results, filing multiple complaints of fraud with the Election Commission in a bid to have the results overturned. And while the government has released political prisoners, including former President Maumoon Gayoom, scores remain in prison with little sign of freedom.

Further complicating matters, the military has publicly stated that it will act, if necessary, to preserve the results of the election—a thinly veiled threat of a coup should Yameen decide not to step down. Chief of Defense Force Maj. Gen. Ahmed Shiyam said in an interview: “The people have spoken. I want to assure the Maldivian people that the military will protect the will of the people.”

While Shiyam’s statement may offer reassurance that the results of the election will be upheld, his words are cause for concern. The threat of a military coup is nothing to celebrate. History suggests that the military’s allegiances are not entirely fixed, and support for democratic revival may be fleeting.

The Maldivian military has a long and often contradictory history with key members of the unified opposition. As president, Gayoom controlled the military for three decades before he lost the first presidential election he ever allowed to be held and stepped down in 2008. Nasheed, who won that election, was himself forced to resign in 2012 by Gayoom’s supporters, who allegedly held the president at gunpoint during a coup. Gayoom went on to support Yameen’s rise to power in a controversial election in 2013 only to be jailed following a falling out. He now plays a key role in the unified opposition that has ousted Yameen.

Solih must seek support from international partners willing to monitor the situation and provide a reassuring presence.

Shortly after the election results were announced, Solih declared to Indian Prime Minister Narendra Modi that India was the Maldives’ “closest ally.” Solih seeks to reverse a steady slump in relations with India that occurred under Yameen, who requested the removal of gifted Indian military equipment and personnel and oversaw the replacement of Indian contractors with Chinese firms to expand the airport servicing Malé, a bid worth $511 million.

The restoration of ties with India to the status that existed before Yameen’s tenure would provide the new government in Malé with a powerful backer to prevent external interference in domestic affairs, and would provide a necessary deterrent to discourage internal political power struggles. But Solih must move quickly.

The people of the Maldives have made their voices heard, but future challenges loom large. Solih’s election is an important step toward a return to normalcy, but it does not guarantee a return to political stability or revitalized democratic institutions. The new government must ensure a smooth transition of power. If this effort succeeds, Solih’s MDP will move substantially closer toward fulfilling its promises to Maldives’ voters.

Trevor Cloen is a project assistant with the Atlantic Council’s South Asia Center.